Turquoise is a blue-green, opaque semi-precious stone with the complex chemical formula CuAl6(PO4)4(OH)8·4H2O. It has been prized since ancient times and used as a decorative stone and gem. [1] 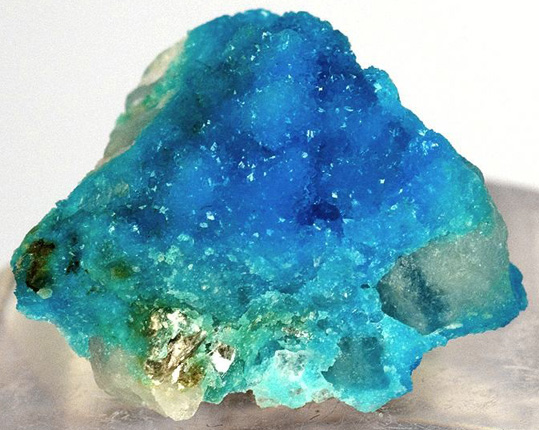 Turquoise is typically cryptocrystalline, meaning that it is composed of microscopically small crystals which cannot be seen with the naked eye. However, it occasionally forms crystals which are large enough to be seen - such as in the uppermost image. Its color is very variable - from white through the blue spectrum from eggshell blue to sky blue, and in various characteristic shades of blue-green, from which the color turquoise gets its name.

Turquoise is a stone with a rich history and body of lore surrounding it. It is one of the world's most ancient gemstones. It adorned the Ancient Egyptians, Incas, Persians, Mesopotamians, the inhabitants of the Indus Valley Civilisation and the Ancient Chinese. In ancient times, various magical or holy powers were ascribed to Turquoise by different cultures. It was believed to bring prosperity, said to be able to protect the wearer against the "evil eye" - and in ancient Persia, blue turquoise stones were said to be able to forewarn against impending doom by changing color if trouble was imminent. [1] Many cultures held similar beliefs around the stone's color changing properties:

"From the rapid decay of this substance when exposed for a few years to the light and to moisture, there can be little doubt that any intaglio of Roman times executed in Turquoise would long ere this have been reduced to a chalky mass. This actually is the case with such gems set in ornaments but a few centuries old, and which have lain underground for part of that period. The mediaeval notion concerning this change of colour was that the Turquoise grew pale on the finger of a sickly person, but recovered its colour when transferred to a healthy hand. Another fancy was that its hue varied with the hour of the day, so that to the careful observer it could serve the purpose of a dial. In Germany it is believed that, when presented as a love-gift, its colour will remain unaltered so long as the giver is faithful, but will grow pale as his affection fades."

It has been found that turquoise can indeed change color - but nowadays it is explained as being due to the action of light, dehydration or skin acidity. [1]

The name originally meant "Turkish" in French, and was given to the stone on account of the trade routes by which it reached Europe. The color turquoise, a "slightly greenish cyan", was named after the stone, rather than the other way round. The highest quality turquoises are considered to be those which are more toward the blue end of the spectrum than the green. Sky blue turquoise is considered the most valuable color.

Turquoise is found in a number of locations worldwide - including in Argentina, Australia, Austria, Chile, France, Germany, Iran, Mexico, the UK and the USA. [2] The South Western USA is one of the most significant sources of high grade turquoise, with mines in California, Arizona, New Mexico, Nevada and Colorado [1]. Much fine turquoise has also come from China in the last 25 years - although it is said that most of the turquoise reaching the USA from China is now treated in some way. [3]

In modern times, turquoise has been much imitated. Other stones such as howlite or magnesite may be dyed, and this is the most common imitation encountered. [1] Some of what is claimed to be turquoise is in fact chrysocolla, which is less expensive [4] or dyed howlite. Experts are sometimes able to discern these fakes by examining the surface structure and appearance of the stone under magnification - but sometimes other tests are required such as the use of hydrochloric acid. Other imitations include glass or even plastics, and there are numerous other possibilities. Often treatment is not disclosed; there is much trickery in the world of gemstones, and turquoise has not escaped. One test which will reveal plastic or wax treatment is the use of a heated probe or pin. [1] 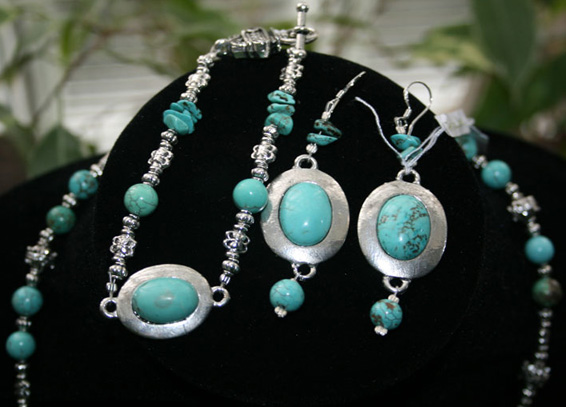 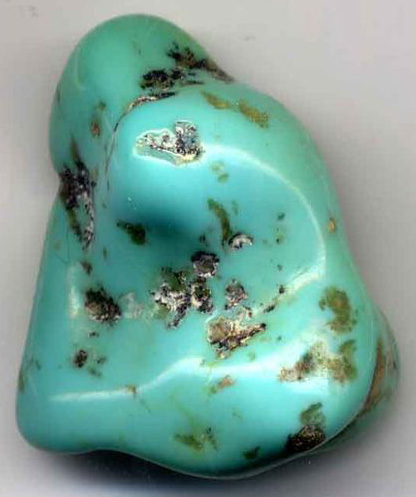