Tourmaline is a well-known stone in the world of gems and minerals. It has several different varieties; and the tourmaline group is a highly group of complex silicate minerals with the same crystal system and similar attributes, but with variations in chemical composition. Tourmalines come in a wide range of colours and some varieties are very popular as gemstones. 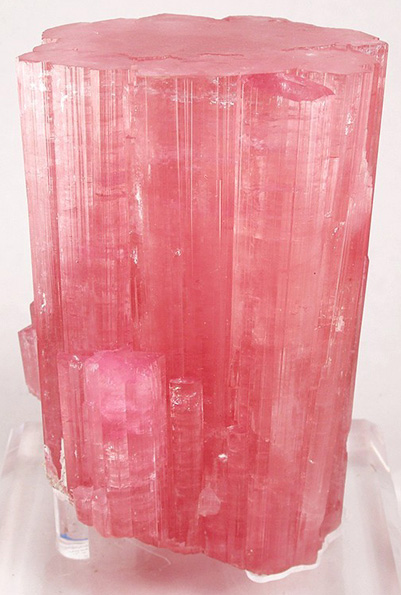 In modern times, some tourmalines are irradiated in order to enhance their color. This is almost impossible to detect and does not harm the value of the stone - however clarity enhanced stones are considered much les valuable than naturally clear stones. [1]

Another famous variety is the Para'ba tourmaline, first found in the state of Para'ba, Brazil in 1989. These are considered by some to be among the best quality tourmalines ever found. Traces of copper in the mineral give them avery bright "neon" blue-green colour. These tourmalines have now been found in neighboring states, and similar (though not as vivid) gems have also now been found in Mozambique and Nigeria. [3] The finest Para'ba tourmalines can sell for tens of thousands of dollars per carat. [4]

Tourmaline has been known since old times. In around 1800 it was spelled "tormalin" or "tourmalin" - and was also nicknamed "Ashstone" as it could take on a static electrical quality that made ash cling to it.

The following is an extended quote from "The Tourmaline" by Augustus Choate Hamlin (1873). Note the section on Brazilian tourmalines - the description makes one wonder if the Para'ba variety may have been found by the 19th century:

"Tourmalines often occur in beautifully-crystallized three-sided prisms, terminated by three principal planes, which sometimes are set on one extremity of one of the sides of the prism, and, on the other, on the edges. Its primitive form of crystallization is the obtuse rhomboid, having the axis parallel to the axis of the prism. The edges of these prisms are often truncated ; and then the crystals form prisms of nine or twelve sides. However, it sometimes occurs massive and compact, or in parallel, divergent, radiating, and detached crystals. Its fracture is decidedly conchoidal, exhibiting internally a vitreous lustre. Its specific gravity ranges from 3 to 3.3; and its refractive power is 1.66, being superior to the topaz in brilliancy. Its hardness is 7.5, and quite equal to that of the emerald. The tourmaline has as great a variety of names and synonymes as the sapphire; and in both minerals they arise from the great diversity of colors displayed by them. The red variety is known among mineralogists as the rubellite, siberite, or daourite ; the blue as the indicolite ; the white as achroite ; and the black as aphrizite, or schorl. But, at the present day, they are all grouped under one name.

The principal localities for the transparent and finest specimens of the tourmaline are in Siberia, Brazil, Ceylon, and the State of Maine of the United States. In Siberia they are found in masses of feldspar and quartz in coarse granite. There are several localities in this great country - some near Ekaterinsburg and Sarapulsk, and others at Nertschink in Eastern Siberia, and near the confines of Northern China. The tourmalines found at these places exhibit a great variety of color: among them occur stones of the true ruby tint (the pigeon's-blood hue), and various shades of purple and of green. The arrangement of color observed in some of the crystals is quite remarkable, and differs from that seen in the specimens from other parts of the world. Some of these stones exhibit internally a blue or brown color, surrounded on the outside with a bright carmine-red, or of a dull yellow, waxy hue. Others may be red internally, enveloped with a pistachio green. Sometimes the crystals are of huge dimensions, and built up of solid material or of a multitude of acicular crystals; or they may occur in long, needle-like forms.

A great variety of color is displayed in these crystals. They may be pink at the summit, and light green at the base; or crimson, tipped with black iron ore. They may also be of a resinous yellow, coated with carmine of intense hue; or of a dark green, changing into an indigo-bluish tinge. The finest red-tinted tourmalines yet known have come from some of these localities. Some of these stones resemble the red sapphire known as the Oriental ruby so perfectly in color, that it is impossible to distinguish them by the eye alone. They are extremely rare, and are as eagerly sought for by the dilettante at the same enormous price of the true ruby. We shall not be surprised if the magnificent ruby in the Russian crown of the Empress Anne Ivanovna proves to be a tourmaline ; and it will not fall in our estimation of its value if it is a siberite. It came from Pekin, which is not far distant from the tourmaline mines of Nertschink. Of the same nature may be the monster red gem which hangs as a pendant to the jade necklace which belonged to the Chinese emperor, and which was captured by the French in the sack of Pekin. This variety of the tourmaline is very apt to be flawed, or filled with imperfections, and especially with hollow threads and feathers and fibres, which are rarely seen in the green, the yellow, or the blue varieties. It is certainly curious that this variety should be so much more liable to imperfections than any of the others, not excepting even the purple.

Purple, blue, and green varieties come from Brazil; but, concerning the formation in which they occur, we can learn but little. We judge, from the famous dispute in the seventeenth century among the Jesuits about a mine at Esperitu, that it is mined in Brazil as well as in Siberia. The crystals brought to us from that country generally do not show signs of having been rolled in the drift; for the striae of their sides are perfect. The absence and loss of perfectly faceted summits do not prove external violence, but rather a submission to the action of the elements, as observed in other localities. They occur of various shades of green, from the light tint to the darkest bottle-green. Sometimes we find them of a beautiful Berlin blue, or of a crimson passing insensibly into a bluish white or a bluish green. The most beautiful specimen yet produced by this country was not long since in the cabinet of minerals of the Duke of Florence.

It exhibited five splendid crystals of darkgreen color on a matrix almost a foot square. Three of these superb crystals were erect, and one prostrate : they were fine prisms, and measured from two to four inches in length by three-quarters of an inch to an inch in diameter.

In Ceylon — the land of gems — the tourmaline, with the exception of the black variety, has not yet been discovered in place: they are always found there in the same gravel-beds of secondary formation with the sapphire, among the debris of the rocks of crystallization. Often they occur in rolled masses or in natural nodules, and sometimes in cryrstals whose faces are uninjured, and whose angles are unbroken. The question may arise, How can this mineral occur in nodules, when the laws relating to its deposition and crystallization are apparently so rigid? We will not attempt to solve the mystery, but can produce many examples to prove that the tourmaline may deposit a nodular concretion in the midst of a perfect crystal. We have removed many tourmalines from the cavities at the locality in Maine which exhibit this peculiarity: the crystals were of perfect form, but shattered by the elements; and, as we attempted to remove them from their beds in the sand, the sharp angles and striated sides fell into minute fragments, leaving a bright rounded nodule in the midst of the stone. Sometimes this nodule would be near the summit or the base, and sometimes in the central portion." 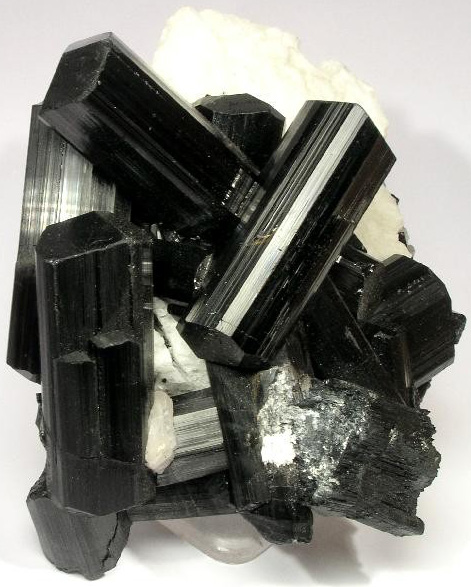 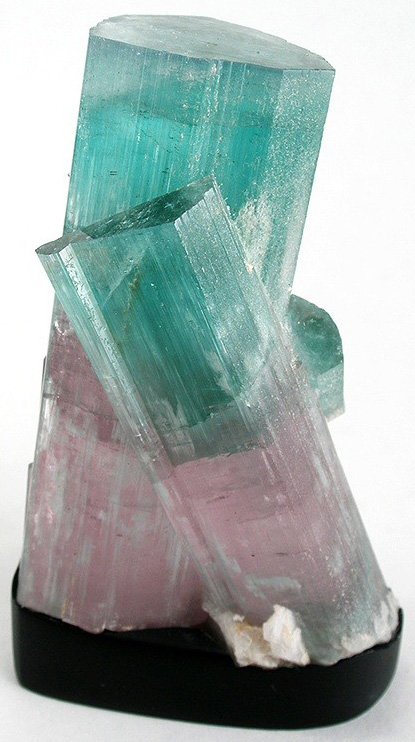