Tigers Eye is unique gemstone and one of the quartz family. Tigers eye gems are usually cut en cabochon i.e. with a domed, oval surface in order to best display their chatoyancy - the visual effect that looks like strands of reflective gold silk inside the stone. [1] Tiger's eye may also commonly be seen shaped in the form of spheres, eggs, beads, hearts, tumbled stones and carved figurines. It is also sometimes faceted into cut gemstone shape. 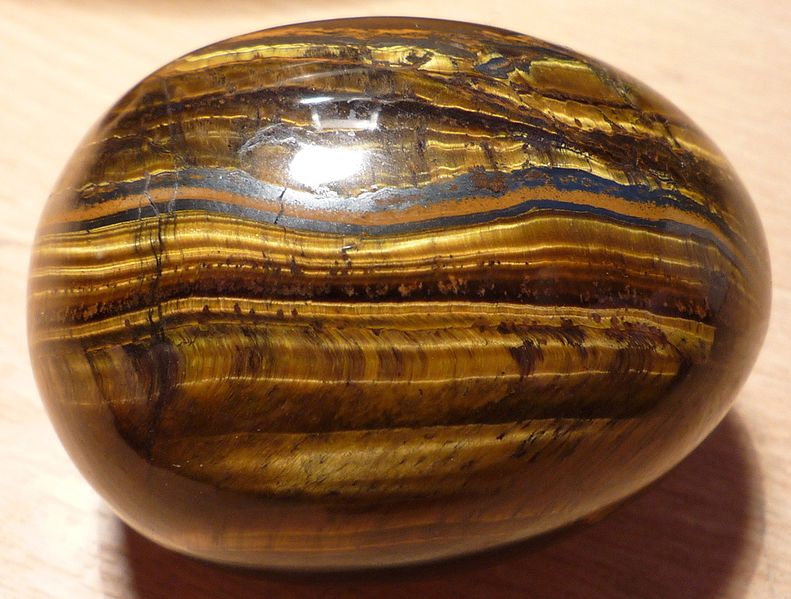 Tigers eye consists mainly of SiO2 - silicon dioxide and it has a hardness of 6.5-7 (Mohs), similar to other types of quartz. The coloration in tiger's eye is predominantly caused by iron oxide - but the cause of its chatoyancy is still debated. Many textbooks state that in the case of tigers eye, the chatoyancy is caused not by rutile, but by the fibrous structure of the stone, which was colored by the oxidization of iron released by the decomposition of crocidolite, a complex silicate mineral. In a fascinating and complex process, crocidolite has been pseudomorphed and sicilified over the passage of time, via hawk's eye into tiger's eye; so that it retains its fibrous structure, but undergoes changes in mineral composition. A pseudomorph is defined as a mineral that does not change its physical construction but has undergone an atom-by-atom replacement of its mineral composition. [2] [3] [4]

Other sources however state that the shimmer of tiger's eye is an example of the synchronous growth of minerals "through a crack-seal vein-filling process". [5]

Tiger's eye is also found in association with hawk's eye. [3]

Tigers eye is sometimes heat treated or artificially dyed in order to deepen its red coloration. An artificial imitation made from fiberoptic glass has been known, and this in a wide range of colors.[1] However, genuine tiger's eye is inexpensive and a quick search online (2010) showed that a tiger's eye spheres around 60mm in diameter can be obtained for around $40. Some of these are "wondrous" colours and looking at the photos of them makes the author wonder if they have been enhanced. Blue tiger's eye is sometimes seen for sale online - although there appears to be some blurring of nomenclature as it is generally stated that this should be called hawk's eye or falcon's eye. Occasionally also, a less common black tigers eye variety is seen for sale.

The use of the term tigers' eye to describe this fibrous, golden and brown quartz variety, appears to date from the late 19th century. Sarah Maria Burnham's 1886 Precious Stones in Nature, Art, and Literature states (p.333) "This gem [i.e. crocidolite] is sometimes called "tiger's eye", because when cut and polished it exhibits the chatoyant lustre of that animal's eye."