A Star Sapphire is a type of sapphire that is typically cut and polished to a cabochon (domed top, flat underneath) and reflects a six-rayed star of light when viewed from a single light source. This phenomenon is known as asterism and is due to inclusions of ultra fine needles of rutile (titanium dioxide) in the sapphire. Asterism can vary in intensity - with the most valuable gems being the ones with the strongest "star effect". [1] 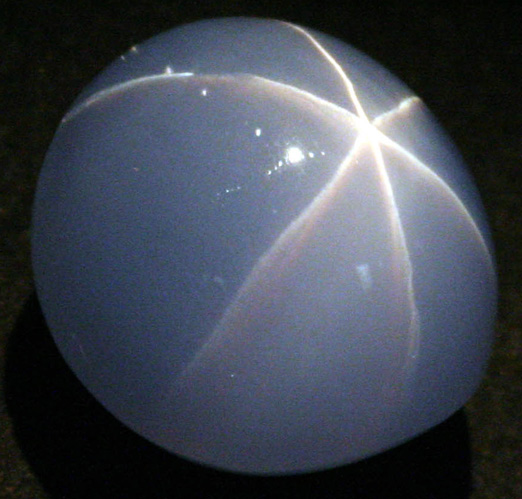 "Star Of India" Star Sapphire
Above: The "Star Of India", 563.35 carats.
The second largest star sapphire in the world.
Discovered in Sri Lanka. Photographed by Daniel Torres, Jr.

The star seen in a star sapphire usually has six rays - however, twelve rayed specimens have also been known. [2] If there are areas of the gem in which the rutile inclusions are not present, those areas will show "holes" in the star pattern. The intensity of the star effect in star sapphires varies form stone to stone. [3]

Star sapphires are typically associated with blue sapphire - however the phenomenon can occur in sapphires of any color - including black. Asterism is also seen in rubies, which are formed from the same predominant mineral - corundum - as sapphire. Star sapphire cabochons are commonly seen either as loose stones or in jewelry settings such as pendants and rings.

The largest star sapphire yet discovered is thought to be the 733 carat Black Star of Queensland - and it has a fantastic story (isn't that always the way with famous gemstones?) It was discovered in Australia in 1938 by 12 year old Roy Spencer, exploring a hillside near his home in the sparsely populated gem mining region of Queensland; and when uncut, the stone weighed 1165 carats - over half a pound. Legend has it that the sapphire, incredibly, was used as a door stop for nearly ten years by the boy's family, who, on account of the dull, dark appearance of the uncut rough, thought it was just a worthless stone - despite having sold other sapphires in the past to jeweler Harry Kazanjian! If you believe in the magical protective powers of stones: Who knows what evils may have been turned away from the door of the Spencer family by this rock? Travelling the world in 1947 in search of valuable gems, Kazanjian, revisiting the Spencers, quickly recognized the sapphire's virtue when shown the stone - and reportedly bought it from the family for $18,000 [4] [5] - a very large sum of money in those days.

The rays of the Black Star of Queensland do not extend all the way through the stone, and are of differing lengths. However, the star's center is very bright and is said to create an amazing effect against the backdrop of the deeply colored stone, when seen in person. [6]

The second largest star sapphire found is thought to be the Star of India. At 563.35 carats (almost exactly 4 ounces and around the size of a golf ball), the Star of India is almost flawless and has the unusual feature of having stars visible on both sides of the stone. The rutile inclusions, aligned in three directions, give this star sapphire both its milky appearance and the asterism effect. The Star of India was once stolen from its home at the American Museum of Natural History, in 1964, in a famous robbery by thieves who unlocked a bathroom window at the museum during opening hours and returned at night. The thieves were caught within a few days and the star sapphire was located a few months later; but one of the other stones taken, the Eagle Diamond, was never recovered and it has been assumed that it was probably cut into a number of smaller stones. [7] [8]

In addition to naturally-occurring star sapphires, the gem is now also created in laboratories. Gems that are lab created should be described as such.

The Star Sapphire was also the name of a bizarre magician's ritual described by the infamous esotericist Aleister Crowley. 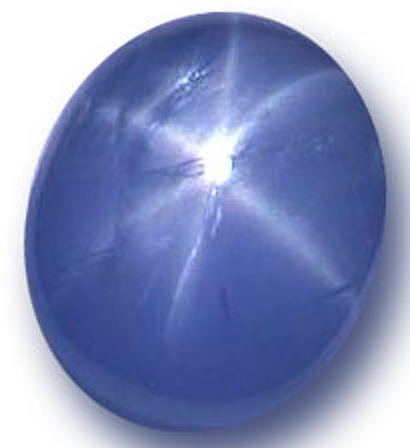 Star Sapphire
Above: The "Star Of Bombay", 182 carats 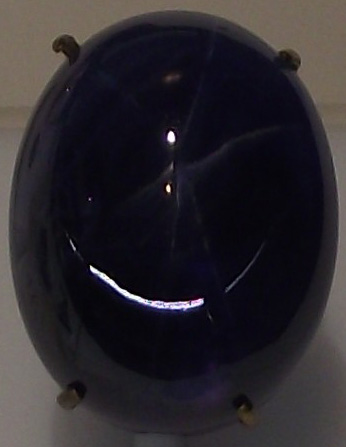