Smoky Quartz is a variety of quartz easily recognized from its dark color. The amount of "smokiness" can vary dramatically, with one part of the crystal often being more smoky than another. Smoky quartz that is so dark as to be opaque is known as morion. [1] Smoky quartz frequently occurs well crystallized, suggesting that it formed slowly from aqueous mineral solutions. [2] 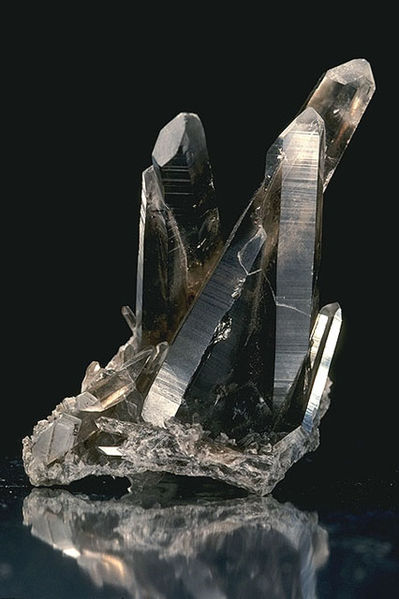 Smoky quartz is often found in rutilated form, and is popular both as a collector's mineral in uncut crystalline form, and when cut and polished into cabochons, spheres, "crystal" shapes and faceted stones.

The cause of the coloration of smoky quartz has been the subject of some debate and some serious in-depth scientific investigation - and even now, looking at research sources it appears that opinion is not unanimous. In general, however, the coloration has been put down to either mineral impurities or radiation, or both. Quartz can be colored brown artificially by radiation; and it has been found that smoky quartz often occurs in association with rare earth and radioactive minerals. There is a correlation between the occurence of smoky quartz and the presence of radium in surrounding rocks. It has been suggested that the coloration of smoky quartz may be caused by elemental silicon, created on an atomic level within the stone by the action of radiation.[2]

Some have suggested iron or titanium impurities as the source of the color; however there has been found to be no correlation between the amount of iron or titanium in the mineral and the darkness of color of the stone - which one would expect if those minerals were responsible for the color. Furthermore, rose quartz contains more titanium than smoky quartz and it is not at all smoky in color. Studies have shown that samples of smoky quartz contained amounts of uranium trioxide, which was not present in either amethyst or rose quartz - but this too was confounded by the fact that when irradiated, rose quartz also turns smoky brown.

The coloration being caused by the presence of free silicon atoms, which in turn were caused by radiation, was demonstrated to be the most likely theory - but Dr. Edward F. Holden, of the, University of Michigan, who performed these studies, concluded that the matter was not completely decided. [2] Even though this work was written up in 1925, it does not appear that the matter has been fully resolved.

Some specimens of smoky quartz sold nowadays have been irradiated in order to strengthen their dark color. [3]

Smoky quartz is widespread and occurs in numerous locations around the world. [4] Smoky quartz that comes from the Cairngorm Mountains region of Scotland is known as Cairngorm.