Selenite is the crystalline form of gypsum, calcium sulphate dihydrate. It has the chemical formula CaSO4·2H2O. 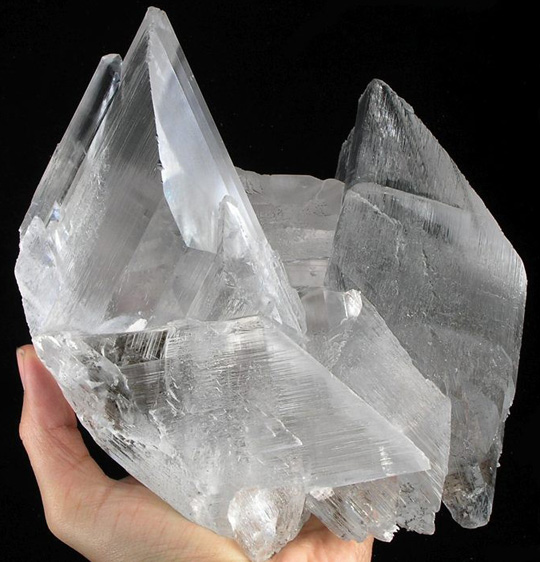 Gypsum in fine grained, massive form is called alabaster. The name gypsum is typically used when describing products made from the dehydrated mineral, such as 'sheetrock' and plaster of Paris used in construction - although the use of the terms seems to have become somewhat interchangeable, with 'gypsum' sometimes being applied to either crystals or the basic rock. The name selenite is typically only used when referring to the translucent crystals - of which there are a number of varieties, including: selenite (flattened crystals or cleavable, transparent masses), satin spar (fibrous, silky and elongated) and desert rose (also known as gypsum flower, selenite rose, gypsum rose - radiating masses of fibrous crystals reminiscent of flowers). [2] [3]

Selenite can also occur in other forms - including the curious ram's horn selenite (see example in the image below) which curls like horns or sometimes looks as though it has been squeezed out of a tube, and the rare "blocky" habit, of which there is also an example in the images.

Selenite has made international news in recent times, owing to the discovery and exploration of the 'Naica Crystal Cave' in Chihuahua, Mexico. In this cave, selenite crystals of colossal size have been found - five times larger than any that had previously been found. Some are as long as telephone poles and weigh over 50 tons. Also, gypsum roses several feet across are found - which are normally a few inches in diameter. In order for such crystals to form, they must be submerged in water at over 50ºC in conditions that are stable for a very long time. The underwater caves deep underneath the Naica Mountain provided such conditions and were discovered in 2000, after the water was drained during mining operations.

Despite its name, selenite does not contain selenium (except perhaps in minute quantities as a trace element.) It was named from the Greek word for Moon, Selene and has been used to describe transparent gypsum crystals since the 15th century. [3] Note that selenite and moonstone are two completely different minerals.

Selenite is widespread throughout the world, occurring on every continent - and selenite crystals can be obtained inexpensively. They are typically sold either in their natural state or fashioned into objects such as "healing wands", hearts, palm stones, spheres or other cut and polished shapes. Selenite is not typically seen fashioned into gemstones as it is too soft (Mohs 1.5 - 2). Selenite is popular in the "metaphysical" community and is regarded as having healing and calm-bringing qualities. Selenite is typically white but may also be seen in other colors such as orange, 'peach' or golden if there are mineral impurities present.

One interesting optical curiosity of the satin spar variety of selenite is that if it is cut straight across the "grain", and the cut ends polished smooth, when the crystal is placed on a printed image, the image will appear to be printed on the upper cut surface. [1]

Selenite has also been nicknamed Maria-Glass or Glacies Mariæ (Latin). [4] It is not recommended to leave selenite crystals in water, as they start dissolving. [5] 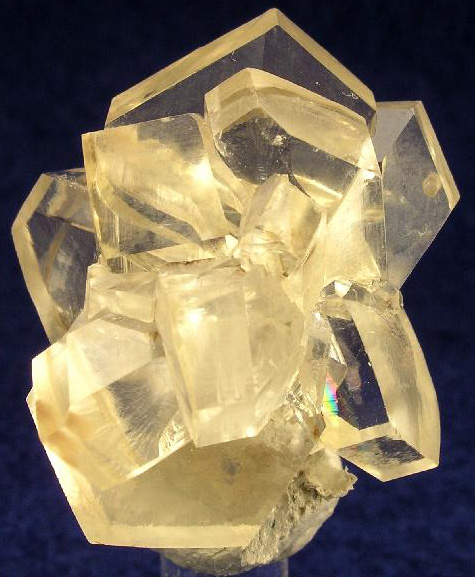 "Blocky" habit selenite
From Manitoba, Canada. Overall size 3 x 2.5 x 2.3 cm.
This type of selenite formed in clay beds and so could grow in all directions.
Photo by Rob Lavinsky, iRocks.com - lic. under CC-BY-SA-3.0 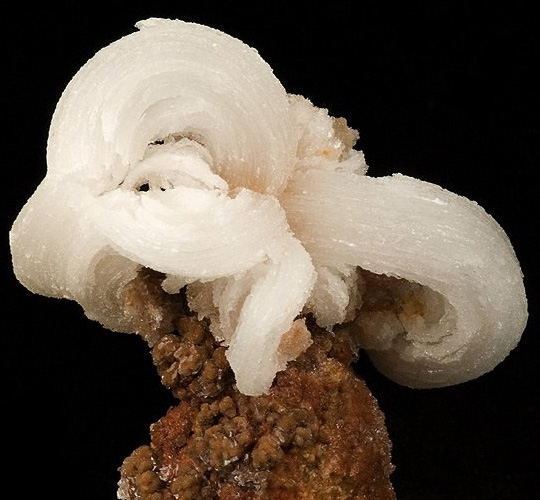 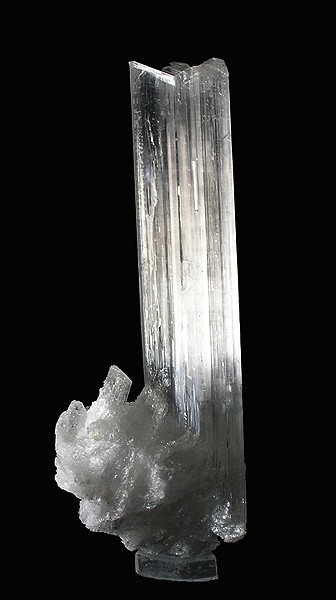