Sapphire is a crystal of the mineral corundum - aluminium oxide (Al2O3). It is almost always thought that sapphires are blue: Sapphire blue, of course! However, sapphires can be almost any color - with the exception of red: Sapphire and ruby are both gems made from corundum - and the red ones are called rubies. Any other color is called a sapphire. 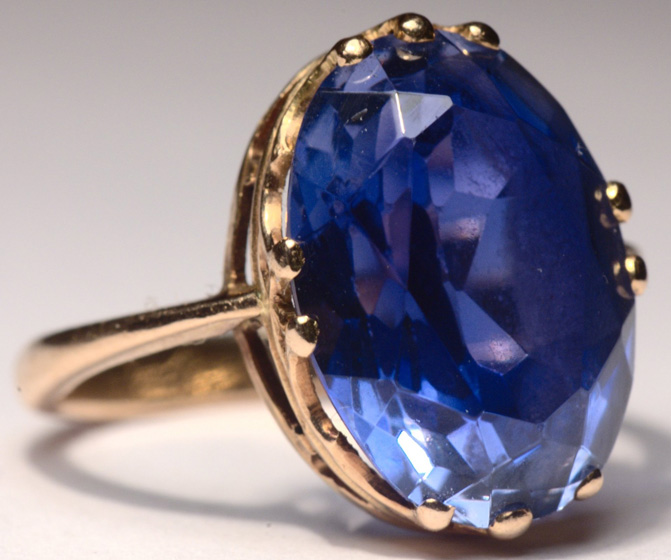 A sapphire's coloration comes from trace amounts of iron, chromium or titanium "impurities" within the crystalline structure of the stone.

Sapphires are very widely used in jewelry-making. Also, on account of its great hardness (9.0 Mohs) , sapphire has much use in industrial applications from electronics to the mechanisms used in watches.

An interesting an popular type of sapphire is the star sapphire - a sapphire which appears to contain a six-rayed star when under bright light. The image of the star is an optical effect known as asterism. There are also a number of other "star gemstones".

Sapphire is the birthstone of the astrological sign of Taurus.

The following is an account of the sapphire from Charles William King's 1866 book "Antique gems: their origin, uses, and value":

"That the Hyacinthus of the ancients was the Sapphire of the present day will be clear to every mineralogist who will carefully consider the minute description of the gem given by Solinus: "Amongst those things of which we have spoken (in Ethiopia) is found also the Hyacinthus of a shining sky-bine colour; a precious stone if it be found without blemish, for it is extremely subject to defects. For generally it is either diluted with violet, or clouded with dark shades, or else melts away into a watery hue with too much whiteness. The best colour of the stone is a steady one, neither dulled by too deep a dye nor too clear with excessive transparency, but which draws a sweetly coloured tint (florem) from the double mixture of brightness and purple. This is the gem that feels the air and sympathises with the heavens, and does not shine equally if the sky be cloudy or bright. Besides, when put in the mouth it is colder than other stones. For engravings indeed it is by no means adapted, inasmuch as it defies all grinding (attritum respuat); it is not however entirely invincible, for it is engraved upon and cut into shape (scribitur et figuratur) by the diamond." In the preceding passage Solinus has spoken of the production of cinnamon in the same district, which, as the native country of this spice, must have been situated on the Indian Ocean. The importations from India and from Ethiopia would naturally be confounded together, since the produce of all these eastern regions came to Alexandria by the way of the Red Sea.

"We have already noticed Pliny's account of the Hyacinthus; it agrees in the main with the above, although his description of the gem is by no means so particular as that of Solinus; who, to judge from his style, probably flourished two centuries later than the former writer. The great commercial intercourse with India, established after the age of Trajan, had by that time made the Romans much better acquainted with the Indian gems. At present all our best Sapphires come from Ceylon; the only place in Europe where they have been found being a brook near Expailly, in France; but these are all of a pale colour and small size. The ancients obtained their Hyacinths from the beds of torrents, just as the Cingalese do Sapphires at this day; for the gem never occurs in the matrix, but always in rolled masses mingled with the gravel. This peculiarity of their origin is elegantly alluded to by Naumachius in his ' Marriage Precepts,' v. 58 :

"Dote not on gold, nor round thy neck so fair
The purple hyacinth or green jasper wear ;
For gold and silver are but dust and earth,
And gems themselves can boast no real worth;
Stones are they, scattered o'er the pebbly coast,
Or on the torrent's brink at random toss'd."

"Curiously enough, there is preserved amongst the antiquities found at Richborough, now in the library of Trinity College, Cambridge, a portion of a necklace formed of small rough Sapphires, drilled through the middle of each stone and linked together with gold wire, doubtless the very kind of ornament alluded to by Naumachius in the above lines.

"Some of the varieties of the Adamas of Pliny were evidently Sapphires, to judge from the terms he uses in describing them: "laterum sexangulo laevore turbinatus in mucronem;" for this six-sided smooth and pointed crystal is the primitive form of the Sapphire. The steel-colour and great weight which he assigns to the Siderites also prove the same, for no other term could so aptly describe the tint of the unpolished light Sapphire. The " aereus color," also, of his Cyprian adamant is the sky-blue of our best Sapphire, its hue being the exact shade of the "air" or atmosphere in the climate of Rome. It is also stated of this variety that, besides its blue tinge, it could be perforated by means of another Diamond, i. e. of a true Indian stone, to which alone the Sapphire yields in hardness. The light coloured Sapphires can be rendered entirely colourless by exposure to intense heat for some hours, and acquire also great brilliancy, so as often to be passed off for real Diamonds.

"The engravings on Diamond ascribed to Jacopo da Trezzo and other artists of the Renaissance were in reality upon this material, or else on white Topaz. Antique intagli in Sapphire that have come under my inspection are the following: a head of Julius Caesar, the stone an octagon and of the finest deep colour; a head of Phoebus, full face and surrounded by rays, on a pale stone of nearly hemispherical shape, the work extremely spirited but not of so decidedly antique a character as the first mentioned (from the Herz Collection) ; a magnificent head of Jupiter, inscribed PY, supposed to be the signature of Pyrgoteles himself, but more probably the owner's name, engraved on a pale Sapphire, the back of which was somewhat globose and highly polished. This stone was nearly an inch in diameter, and was discovered forming the ornament of the pommel of the handle to a Turkish dagger, the intaglio being entirely concealed by the setting, " the Sapphire being set as a stone cut en cabochon, the flat face downwards." This furnishes an additional proof of its authenticity, and shows that the gem had been picked up by some Oriental who looked to nothing but the value of the material and utterly disregarded the art displayed upon it. This intaglio was, in the opinion of the best judges, one of the finest productions of the Greek school. A head of Alexander as represented on his drachmae, and of the same size as that coin, on a pale stone streaked with indigo, the execution of the intaglio in a flat, peculiar manner, very similar to that of the gems assigned to the cities of Magna Grecia, and indubitably antique. Of intagli of a later date the Pulsky Collection can boast of a portrait of Pope Paul III., by the famous Alessandro Cesati, on a beautiful Sapphire three-quarters of an inch square, a truly inestimable gem both for the fineness of the stone and the spirit and life of the engraving.

"This stone derived its ancient name Hyacinthus from the resemblance of its colour to the blue fleur-de-lys fabled to have sprung from the blood of Apollo's favourite Hyacinthus, and to bear inscribed on its petals AIAI, the cry of grief of the god, an inscription still to be seen there. This sameness of names, of the boy and of the stone, gave the origin of the epigram at the beginning of this article.

"The modern name of Sapphire is due to its colour; the ancient Sapphirus or Lapis Lazuli furnishing the paint ultramarine, "sapphirinus" came to signify "azure;" and we find the blue varieties of the precious Corundum already called Sapphirini by Camillo Leonardo at the end of the 15th century, to distinguish them from the red and yellow varieties (Ruby and Oriental Topaz) of the same family. The Hyacinthus of the classic writers is always the blue kind; but Marbodus, in the 11th century, already makes the three divisions above noticed, the blue, red, and yellow, and, with an accuracy surprising for that early period, refers them all to the same family—the modern mineralogical classification.

At the Renaissance the price of coloured gems of perfect quality far exceeded that of the Diamond; and as a curiosity I give Cellini's table of their comparative value, from his ' Orificeria' -

The gold scudo equalled a half-sovereign in weight, but was of far greater value on account of the difference in the worth of money. This, however, was not so great at the time he wrote (about 1560) in Italy, then the richest country of Europe, as it was in England, where the difference between the value of money then and now is usually computed as fifteen to one. At the present day a perfect Sapphire or Emerald of one carat will sell equally for £3, a Diamond brilliant-cut for £8. A Ruby of a carat is worth the same as the two first; but if it should weigh more than two carats and be perfect, its value far exceeds that of the Diamond. I have seen a perfect Ruby, weighing four carats, that had been bought for £300; a Diamond of the same weight would only have been worth £160. Vossius mentions a Ruby belonging to the Emperor Rudolph II. as large as a small hen's egg, and valued at 60,000 ducats, or £30,000. The King of Ava possesses at present one even larger, and quite perfect in colour and in water, set as an ear-drop. Its value is inestimable and far beyond that of a Diamond of similar dimensions." 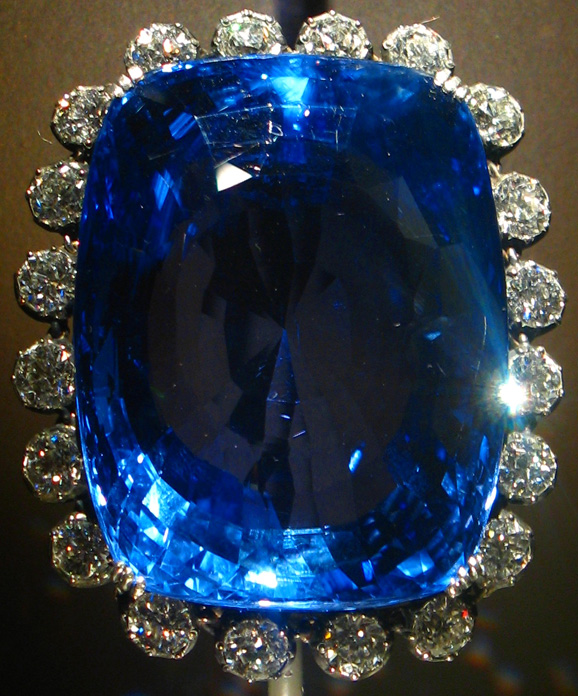 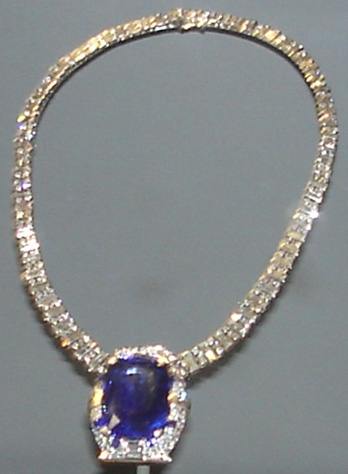 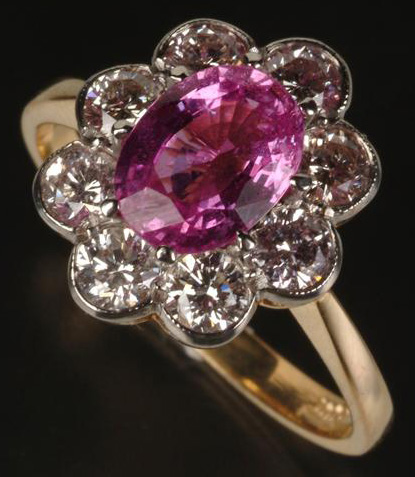