Prehnite was named in 1789 and has the odd distinction of being the first mineral named after a person - Colonel Hendrik Von Prehn, a commander of the Dutch military forces in the 18th century, who is recorded to have brought the mineral to Europe from the Cape of Good Hope. [1] [2] Other sources however say that the first discovery was in Germany [3] - but this may be a reference to the fact that it was German mineralogist Werner who established it as its own species and named it after its discoverer. [4]

Prehnite is most often pale green to yellow - although it can be blue or white, and very rarely orange. It is a phyllosilicate mineral, with a hardness of 6-6.5 (Mohs), it and has the chemical formula Ca2Al(AlSi3O10)(OH)2 - calcium aluminum silicate hydroxide. [1]

Prehnite most often forms globular shapes as in the second image (below) - but can also form columnar or tabular crystals with facets, and can occasionally be seen fashioned into a cabochon, faceted gem or even carved into miniature sculptures. [2]

Faceted prehnite gemstones can be seen for sale online, and it's not uncommon (Jan 2011) for apple-green, translucent faceted prehnite to be priced around $5-$20 per carat for stones in the 5-20 carat range. Semi-opaque prehnite cabochons can be seen retailing at less than $1 per carat.

Prehnite is found in numerous places around the world, with the most significant number of mines listed in Austria, Australia, Canada, Czech Republic, France, Germany, Italy, Japan, Norway, Russia, South Africa, Spain, Sweden, Switzerland, UK, and the USA. [5] Prehnite is often seen in association with other crystals such as apophyllite or babingtonite; and often in the form of a matrix from which these other mineral crystals have grown.

Prehnite is occasionally seen in chatoyant (i.e. cat's eye) form. Cat's eye prehnite is rare, and is said to have been seen only in old finds from Australia. It may be priced at around $100 per carat. [6]

Prehnite has been found in association with zeolites, pectolite, calcite, epidote, datolite, and copper. [7] 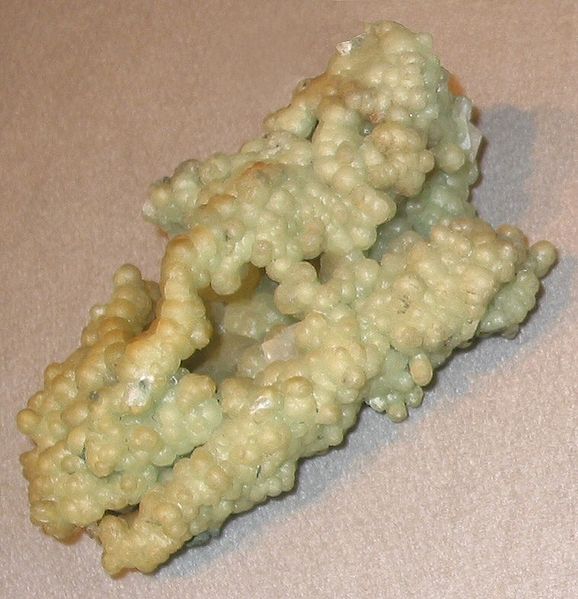