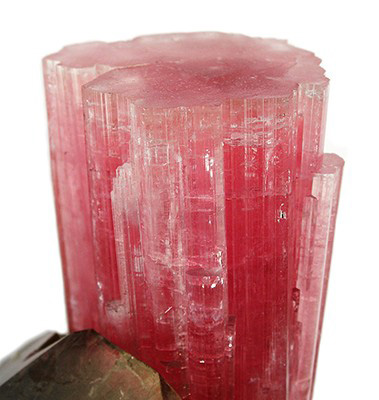 Pink tourmaline, similarly to other tourmaline varieties, has a hardness of around 7.5 Mohs and is often found in association with various kinds of quartz. It's interesting to note that although elbaite was identified as a unique tourmaline species and named in 1913 after a find at Elba Island, Italy, pink tourmaline has been mentioned by mineralogists in their books since at least the mid 19th century.

As with other colored tourmaline varieties, pink tourmaline is popular both to mineral collectors (in its natural form), and with gemstone aficionados as a faceted stone. Tourmaline is noted amongst gemstones for being one of the stones that can occur in numerous different colors and shades. Pink tourmaline can occur in a wide variety of shades.

As with all gemstones, prices vary widely depending on cut, clarity and color - however fine quality pink tourmalines can often be seen for sale online (February 2011) priced from between $100 and $300 per carat for faceted stones in the region of 5-25 carats. Cabochon cut stones - which are often of lesser clarity - may be seen for less. The very finest tourmalines may even reach into the thousands per carat. Pink tourmalines over 20 carats are less common - and the largest I have seen for sale are a little over 100 carats.

At the other end of the spectrum, it is of course possible to get "lower grade" tourmalines literally for a very few dollars. The enormous disparity in prices between gemstone markets, and between the prices of high quality and lower quality stones, highlights the importance of expertise and trusted sources. It's also worth noting that much of the pink tourmaline on the market may be heated and / or irradiated in order to enhance color - and this should be disclosed; although it may not be, or it may even be deliberatedly misrepresented. You really can buy a one-carat so-called "natural pink tourmaline" for a dollar online, if you look around. Whether or not these stones are what they claim to be, I cannot say.

There are ways, of course, of identifying treated stones - though these may require some training and even lab equipment. It's said that irradiated rubellite / pink tourmaline has a particular shade which can be identified by an expert who has compared numerous stones. Another tip is if an entire batch of pink tourmaline has identical color it may have been irradiated. [3] At the end of the day, the standard recommendation is always the same: Reputable dealers and certification from respected gem laboratories.

Note - I have even seen pink tourmaline marketed online as "padparadscha pink tourmaline". While this may (or may not) be an accurate description of the color of said gemstone, it should be noted that padparadscha and tourmaline are two completely different gemstones. Padparadscha is a variety of sapphire. 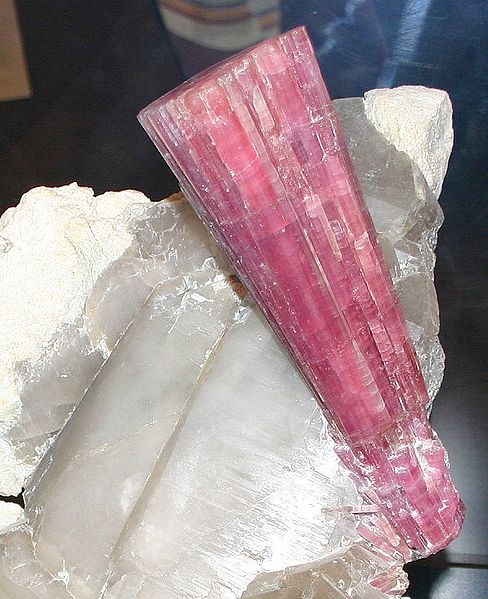