Pietersite is an uncommon mineral that has only been found in two places in the world - Namibia (in the south-west of Africa) and Hunan, China. It was first found in 1962 by a Mr. Sid Pieters, who was prospecting on some farmland in Namibia. The stone was named pietersite after him in 1964.[1] 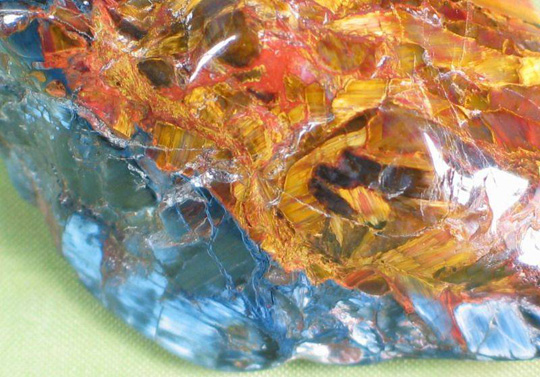 Pietersite is an example of a mineral pseudomorph. This is a mineral that changes over the course of time. Tiger's eye is the result of decomposed crocidolite (aka. riebeckite); and hawk's eye is an incompletely decomposed form. [4] So what we have, in effect, is a mineral which started life as crocidolite, has been partly decomposed, smashed, mixed around and reformed. In modern parlance, pietersite is what might be called a "mash-up".

Pietersite is a breccia aggregate composed mainly of tiger's eye and hawk's eye - two related minerals. Breccia is a term used to label rock composed of broken-up pieces of mineral held together by finer particles of material - and one can see the contrast between the more orderly patterning of tiger's eye and the chaotic patterns of pietersite. In this instance, an "aggregate" basically means a "mix".

Pietersite can be quite variable in overall colour - but typically contains blue, reds and green/gold. The patterning also can be variable - but is typically "chaotic" - and polished stones often exhibit iridescent, shiny swirls of color somewhat reminiscent of lava flows or patches of oil on water - only brighter and more multicolored.

Pieteresite is typically fashioned into cabochons, polished spheres or other popular shapes. For some reason, Pietersite often seems to get fashioned into paperweights.

Pietersite is commonly available for sale on line and can be inexpensive (February 2011), with many specimens of lesser or even fair color being priced around or less than $1 per carat at retail. As with all things gemstone-related, the finest material is on another level in terms of both color and price. Whereas cheaper pietersite may sometimes look "too dark" and dull in color, the best pietersite is very brightly colored, may often be chatoyant - and should exhibit marvellous "tropical bird feather" blues, golds and reds, together with attractive, abstract patterning. Examples of this may fetch $5-50 per carat at retail. For example I have just viewed a top grade 75-carat pietersite cabochon priced at $523, which works out to $7 per carat.

Note: I have read that safe practices should be observed if cutting or working pietersite as it may contain asbestos. (This is not medical advice). 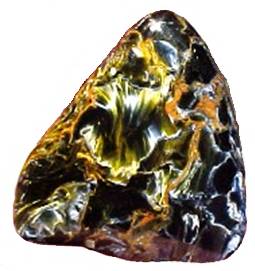