Muscovite, also referred to as common mica or isinglass, is an interesting aluminium silicate mineral with the chemical formula KAl2(AlSi3O10)(F,OH)2 [1]. (Note that the term Muscovite may also be used to refer to an inhabitant of Moscow or of the historical Muscovy). 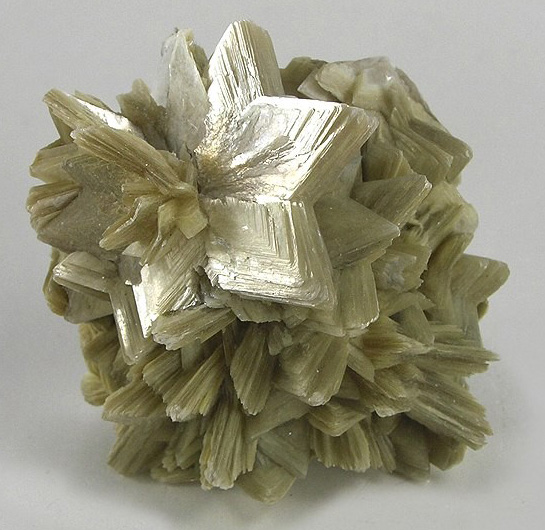 The mineral muscovite grows in a layered structure, with cleavage being perfect in one direction. The thin layers, which are held together by the weak structure of potassium ions, are easily split apart despite being strong in themselves. This quality means that muscovite forms durable, thin sheets. Muscovite also happens to have high heat resistance and electrical insulation, and with these qualities it has found much use in manufacturing of electronics and fireproof components. [2]

Large sheets of mica are sometimes found and these were once used in Russia to make windows; and the name Muscovite was derived from the city of Moscow. [2] Muscovite has also found use as a wondow material in furnaces and ovens, and, owing to its electrical insulating qulity, as a material for early circuit boards. [1]

Muscovite has certainly been known about and used for a long time. The earliest reference to it I can find is in the 1669 "Philosophical Transaction of the Royal Society", in which there was a report on some excavations that had unearthed "vasa lacrymalia of Glass, which by length of time were become laminated into divers leaves, beautifyed with pavonaceous colors: the places like to Muscovy-Glass, fissil [i.e. split] into leaves." [4]

Robert Hooke's 1679 "Lectiones Cutlerianae" mentions that he was using plates of Muscovy glass in the creation of microscope plates. [5] It's not confirmed that this is our mineral muscovite, but it seems highly likely.

Abbé Chappe d'Auteroche's 1770 "A Journey into Siberia: Made by Order of the King of France... in 1761" has a very fine description of muscovite, worthy of replication here:

"This kind of gypse is found in several parts of Russia, especially in Siberia, where glass is made of it. It is sometimes two feet and a half square, and commonly five or six inches. It is one third of a line in thickness, and is so transparent that one may read through it: its color is a light brown, inclining to yellow.

It makes a certain noise when scraped with.the point of a knife, or any other instrument; it is so tough, that it must be bent backwards and forwards several times before it will break, and is composed of an infinite number of lamina. At first it separates readily into six or seven lamina in its longitudinal direction; each of which become flexible and more transparent.The surfaces are very shining, and as smooth as the best polished glass. Each of these lamina is easily subdivided into three others: they are then so transparent, that the color of objects is not much affected by them; they are also so pliable that they may be twisted round the singer like paper, and will immediately recover their common form. If one of these lamina is farther subdivided, it falls into spangles, which may be blown away.

This mica resists fire and acids: it does not decrepitate, but makes a noise something like butter beginning to melt in a pan, which seems to proceed from the separation of the lamina: it then becomes four lines in thickness, instead of one third of a line as it was before. A number of about thirty lamina more or less distant from each other may be distinguished in it; and although: they should be brought together with the fingers, they immediately return to their natural state.

This mica, after being made red hot, is still pliable: it acquires a white color as bright as silver. It loses its transparency when left to its original thickness of one third of a line, and becomes half transparent again when divided into twenty lamina. It may then be subdivided into an infinite number of other lamina of different sizes, like the silver leaves used by the gilders. When it is rubbed for any time in the palm of the hand, it falls into spangles which stick to the skin."

Muscovite is often seen occurring naturally in the form of a jumble of thin flakes, like those seen in the images - and although not typically considered a gemstone, it is sometimes found as a matrix from which gem quality crystals of other types have grown - such as apatite, aquamarine and other beryls, brazilianite, cassiterite, fluorite, spessartine (a species of garnet) or tourmaline. Also, an unusual twinned variety can sometimes be seen called "Star Muscovite" which forms star-shaped plates - as in the second image.

Muscovite occurs in very many locations around the world including Australia, Bolivia, Brazil, Chile, Canada, China, France, Norway, Russia, Slovakia, and the USA. [6]

Muscovite's hardness is 2-4 Mohs - variable in different directions. It is too soft / easily cleaved to be well suited to use in cut gemstone jewelry, and is hence very uncommon in faceted form. It is somewhat amusingly described by Freakingcat Gems, a specialist supplier of unusual gemstones, as "ultra hardcore to facet". However muscovite may sometimes been seen in the form of cabochons or beads, and these can be seen for sale online, often priced at a few dollars.

One variety of muscovite, called fuchsite, is green in color - and this coloration is due to the presence of chromium. Fuchsite is sometimes found with inclusions of ruby. [3] 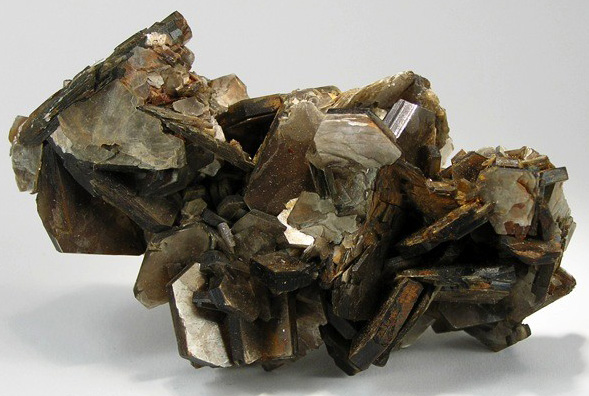 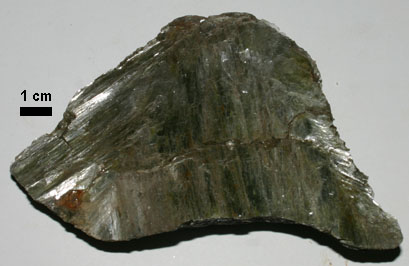