Morganite is a rare type of beryl, usually pale to rose pink but sometimes with shades of orange/yellow. In the 19th century, morganite used to be known simply as "rose beryl" or occasionally "pink beryl". The earliest reference to it I can find is in the 1829 American Journal of Science (volume 16, p.188), where it is described as occurring at Goshen, Massachussets. It was not until 1911 it was decided that rose beryl should have its own name and be identified as its own gemstone. It was named morganite after J.P. Morgan, who was a wealthy and successful American banker and mineral collector. [1] 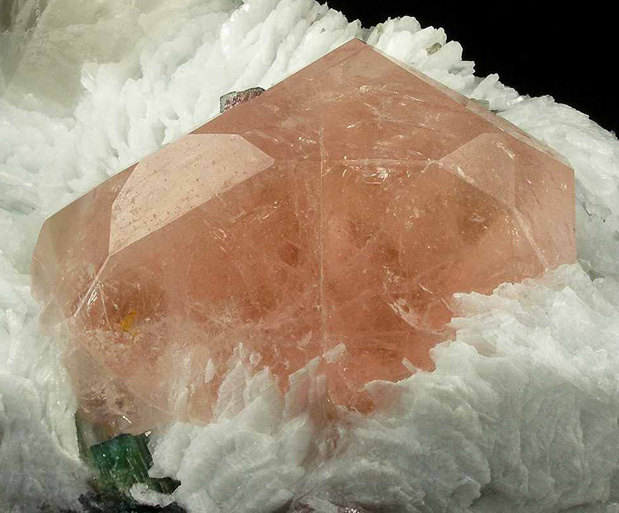 Morganite has the same overall chemical formula as other beryls - Be3Al2(SiO3)6 (Beryllium aluminium silicate). However, pure beryl would be colorlesgs - and morganite's color is derived from the presence of manganese ions within the crystal's structure. Morganite is hard, like other beryls: 7.5-8 on the Mohs scale.

Morganite is found in numerous locations around the world - including Afghanistan, Argentina, Brazil, Burma, Canadam Czech Republic, Italy, Madagascar, Pakistan, Russia, Sri Lanka and in many locations in the USA (particularly California, Connecticut and Maine). [3]

Morganite is often faceted into a gemstone. It's not uncommon to see cut morganites of over 15 carats on the marketplace - and the price currently seems (very approximately) to be around $40-50 per carat (2010). Morganite may also been seen for sale as a tumbled stone.

Some morganites in the marketplace are said to have been heat treated or irradiated to improve the color or remove yellow areas. [2] Morganite sometimes naturally shows color bands - slightly blue near the base, transparent in the middle and pink near the termination, and in these cases high heat treatment is sometimes used to balance the color. [4]

One of the largest gem morganites ever found was discovered in 1989 in Maine, USA. The stone, which was named "The Rose of Maine", was approximately 9 inches long and 12 inches wide; and together with the remaining piece of "matrix" (rock that it was originally attached to, that it was chiseled out with) weighed over 50 pounds. [2] 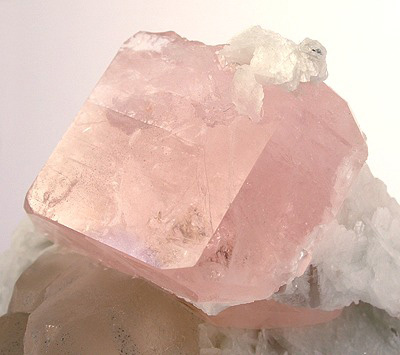