Moonstone is a composite mineral, made up of two different types of feldspar - orthoclase and albite. Moonstone is famed for its unusual shimmering, opalescent optical quality, called adularescence. [1] This phenomenon is a type of schiller somewhat similar to the labradorescence displayed by labradorite, another composite feldspar. 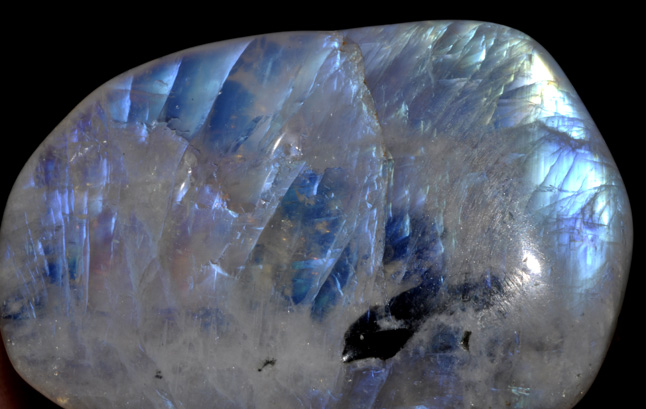 Depsite the name, moonstone does not have lunar origins; its name derives from its appearance. When moonstone was forming, the two types of feldspar were mixed. As the rock cooled, the feldspars separated into stacks of very thin, alternating layers. Variations in the light performance characteristics of the layers generate the optical effect and the separation of the light into different colors. [5]

Moonstone is most often fashioned as a cabochon (also nicknamed a "cab" or "cabbie") - with a domed top and flat underneath. When a moonstone is cut this way, the skilled cutter takes care to align the stone so that the optical shimmering effect is best presented. You may sometimes see an unusually transparent moonstone cut as a faceted gem - in which form it can have a uniquely magical beauty. [6]

Moonstone is somewhat soft, and so older stones can become dull through surface wear. It is possible to have them polished by a jeweler in order to bring back their luster. [3]

Moonstone has been categorized into two types: Adularia Moonstone, which is more transparent, and typically originates in Asian countries such as Burma and India; and Albite Moonstone, which is typically less transparent, and mainly originates from Canada. [2] You may occasionally find moonstone referred to as simply "adularia" or "selenite", but more typically, it is all "lumped" together and simply labeled as moonstone - and it is up to the buyer to discern the indentity and quality of what they are getting.

Moonstone prices are enormously variable. The highest grade of moonstone is colorless, perfectly clear and has a royal blue shimmer. Such stones are most often cut en cabochon and may be seen priced at around $100 / carat retail (March 2011). Once seen, these stones are not easily forgotten as they are in a class of their own. The simplest way to see a number of these stones for comparison is to do an eBay search for moonstone, select the "Loose Diamonds and Gemstones" category, and then arrange the list "Price + Shipping: Highest First." The bluish moonstones from Sri Lanka are considered to be some of the best quality - and are becoming expensive as they are becoming scarcer. [3] Lesser stones may have other colors, appear more milky or cloudy, and have inclusions.

Moonstone can occur in a few varieties other than the typical blue-white-silver-cream range of colors commonly seen. Some moonstones diplay more of a prominent "rainbow effect" and are called rainbow moonstones. [4] Occasionally one sees red, pink, orange or red-brown moonstones; however the black stone marketed as black moonstone is in fact a type of labradorite.

Moonstones with the chatoyant "cat's eye" effect are quite common - with a flash of light reflecting across the center of the cabochon, as seen in the second image above. However, you may also occasionally see a rare "star moonstone" - which displays asterism in a similar manner to a star sapphire or star ruby. The phenomenon of asterism, as the name suggests, displays a four or six-pointed star reflection within the stone when light shines on it. I have seen photos of moonstones for sale with both four and six rayed stars.

Moonstone was called Selenites (sometimes also Selenite or Silenites) in ancient times. However the identities of stones listed in older texts are not always clear - and descriptions of the stones often make claims for qualities which would be regarded nowadays as supernatural. The exact stone signified by the old term selenites is not known, and may well have been a completely different stone, as the properties ascribed to it are often quite different to those of the moonstone of today (and often contradictory to modern science.) [8] Indeed the identity of moonstone may have shifted more than once throughout time, and considerable confusion is added by the fact that the name selenite has also been used for the crystalline form of gypsum, a completely different mineral. Oxford English Dictionary (1971 ed., p.2714) informs us that the first recorded use of the word in this latter meaning was from the year 1668.

The word Selenites derives from the Greek Goddess of the Moon Selene, who was the daughter of Hyperion and Thea, Titans that ruled during the Golden Age. [9] [10] Moonstone was alternately called Aphroselene or Aphroselenon by the Ancient Greeks, which meant "Splendour of the Moon". The Romans named it Lunaris, deriving from Luna, the Latin name for Moon. [11]

One of the earliest known descriptions of moonstone comes from the "De Materia Medica" of Dioscorides, the famous ancient Greek Physician (c.40-90AD). Although revered and considered an authoritative tome for many centuries, Dioscorides' famous work was not translated into English until the 1600's - and this translation was not published until the 20th century. Dioscorides gives a brief description of moonstone - yet this is unfortunately not enough to identify it positively with the moonstone of today:

"Lapis Selenites which some have called Aphroselenon because it is found in ye night-time, full in ye increase of ye moon. But it grows in Arabia, being white, transparent, light: filing it they give ye dust for a drink to ye epilepticall; but the women use it to hang it about them for an Amulet, & it is thought that being bound to trees, it makes them bear fruit."

Part of the reason Dioscorides' famous De Materia Medica was not translated into English was simply that the European language of medieval scholarship was Latin - and prior to the age of printing, manuscripts were copied by hand. In the case of Dioscorides, many annotations and commentaries were gradually added to the text over the centuries, and these might prove instructive: In Janus Cornarius' 1557 Latin version of Dioscorides' text, an extensive commentary appears, referencing Pliny (who wrote at length on gemstones, although he was brief on selenites), Galen, Hippocrates and others. [12] Another greatly extended commentary on Dioscorides was that of Pietro Andrea Mattioli, again in Latin, printed in 1554, which may have taken at least in part from the AD 512 version, the oldest and most famous copy of the work, which is said to have been augmented with the observations of Galen and Crateuas. These commentaries may possibly give further clues on the identity of the moonstone of Graeco-Roman times, as well as many other things; [13] however it seems that the commentaries may never have been translated into English! As my Latin is rusty (and funds are limited) it may have to wait.

At times in history, curious, magical or fabulous qualities have been ascribed to moonstones. Moonstone has long been a popular stone - and was particularly revered in India, where it has long been considered a sacred stone. [13]

The moonstone was also at times believed to have special significance and fortune for lovers and was considered a fine romantic gift. In 1531, Marbodus, writing in his "De Lapidibus", stated that if a moonstone was placed in the mouth when the moon was full, it would enable lovers to read the future of their relationship. [15] Marbodus also described the stone as increasing and decreasing in size. [11]

In his 1623 English Language dictionary, it was stated by Henry Cockeram that moonstones (i.e. Selenite) contained a "white" shape or color which waxed and waned in accordance with the moon's phase. [16] This belief appears to have been widespread in that era. Andreas Baccius (presumably writing in his 1603 "De Gemmis et Lapidibus Pretiosis" - "About Gems and Precious Stones"), stated that "The Selenite is a kind of gem which doth contain in it the image of the moon, and it doth represent it increasing and decreasing according to the increase and decrease of the moon, in its monthly changes." [11]

This strange legend seems to be truly ancient, and to have appeared from the mists of time with Bartholomew de Glanville (aka Bartholomaeus Anglicus)'s 13th century "De Proprietatibus Rerum" ("On the Properties of Things"). Bartholomew's 19-volume On The Properties of Things was a famous encyclopedia of the 13th century and the first to be published in the English language. It became the most popular work of its kind for several hundred years. It existed in numerous manuscript editions, printed editions and translations - and by 1600 English scholars had hailed Bartholomew as a national treasure. [17]

John Trevisa, writing in his 1398 English translation of this work, states "Silenites is a stone of Perse [i.e. Persia] grene as grasse and shineth with a white specke and this stone foloweth the mone and wexyth and waneth as the moon dooth." It seems not unlikely that the several writers of the 16th and 17th centuries, repeating this legend, drew from Bartholomew. As for Bartholomew's own sources; he is said to have been exceptionally well-read, and to have been "the first writer to make conveniently available the views of Greek, Jewish, and Arabic scholars on medical and scientific subjects." [18] Who can speculate upon what ancient sources Bartholomew may have drawn, and on how old the tale of the waxing and waning moon within the stone?

This legend is most curious - as either the waxing and waning moon was visible in the stone, or it was not. If it was visible, what were these stones that defy our modern science? If it was invisible, why are there numerous accounts of this stone? After all, it would not take much in the way of observation to discredit such a tale. What are we to make of this? Perhaps in old times, when the world was a little younger and more innocent, the edges of "reality" were not as strictly defined and fixed as they are today, and the miraculous took place. Writing in his 1571 "Les Secrets de la Lune" ("The Secrets of the Moon"), Antoine Mizauld claimed to have investigated this mystery first hand, stating that he obtained one of these stones, and had observed it carefully for one lunar month. He assures us that the lunar mark... "was like a small millet-seed, increasing in size and moving down the stone, always assuming the form of the moon until, on reaching the middle, it was round and full like the moon; then the mark gradually passed up again as the moon diminished."[15]

Finally, moonstone appears to have been used medicinally in the 18th century. John Hill's 1751 History of the Materia Medica has a two-page description of the moonstone, also referred to by him as selenite. It was indicated as a treatment for haemmorage and also acquired the nickname staunch in Northamptonshire, England, where it was commonly found. The tradition of the use of gemstones in medicine has very ancient beginnings, and medicinal properties of gemstones are described in Dioscorides, Pliny and others.

In folklore it is said to be a stone that inspires emotion, feeling and any "feminine qualities" - assisting intuition and giving benefit especially to young women and those who care for others. Folklore also states that it brings good fortune to lovers and those travelling by night or over water. [19]

Moonstone is often seen set into silver jewelry: In addition to the way their colors complement each other, the two materials, silver and moonstone, have a symbolic connection; with silver since ancient times being the metal associated with the moon. 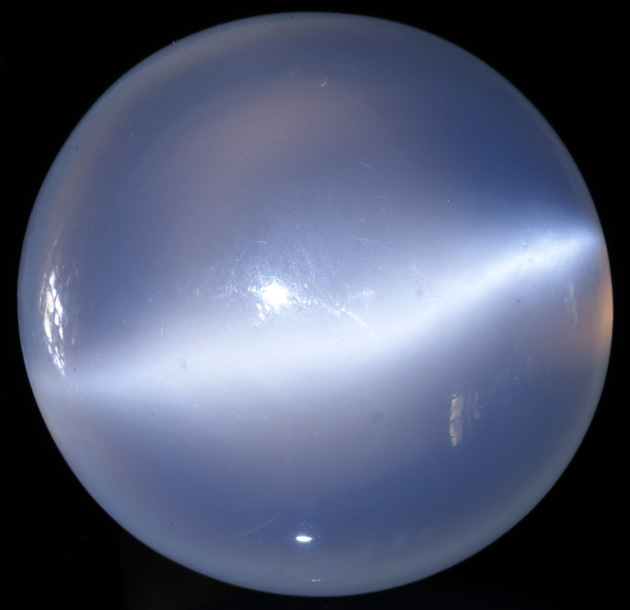 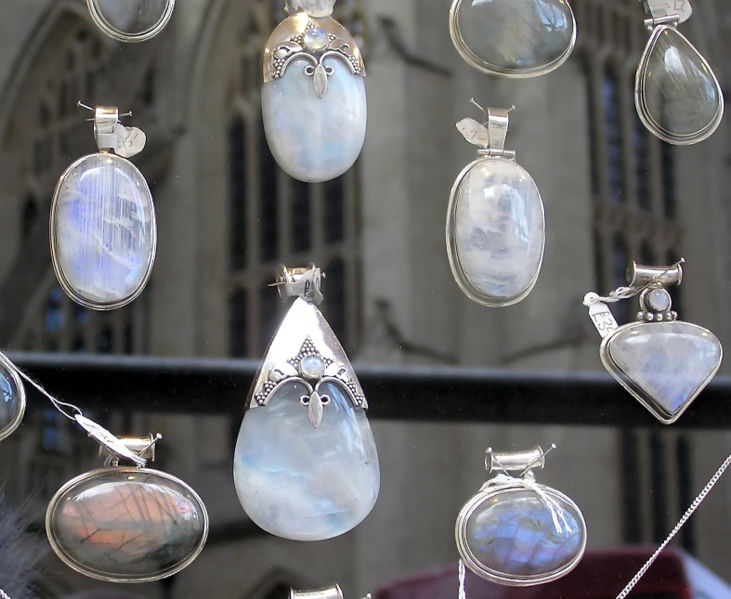