Moldavite is a naturally-occuring green glassy substance. It was once thought to be of artificial origin or even a type of obsidian but there were too many inconsistencies with these ideas, including its unusually low water content. It is a type of tektite - and most scientists believe that tektites were formed by large meteorite impacts. The theory is that the impact melted rocks and that the "splashes" cooled in the air and fell to the ground. It is estimated that there is around 275 tons of moldavite around the world. [1] [2] 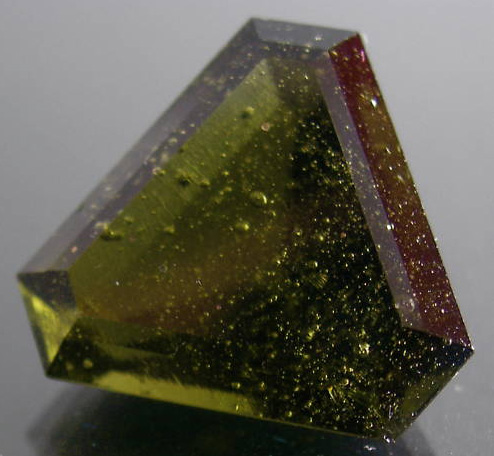 The principal location for moldavite is the Czech Republic. The moldavite there is believed to have come from a meteorite impact 15 million years ago, and the stone was named after the Czech town of Moldauthein / the Moldau river. However, much of the moldavite has now been mined and many of the Czech mines have closed. It is estimated that the Czech resources of gem grade moldavite will last less than 10 years. [1] There are also small amounts in neighboring Austria and Germany. [3]

Moldavite can occur naturally in some very unusual and intricate shapes. Higher quality moldavite is considered to be that which is more translucent. I have also read that there is an African moldavite - but this is not mentioned by Mindat.org. Looking into this further I read that the African moldavite is either tsavorite or green glass (although the former is unlikely, as tsavorite is very rare and expensive!) As moldavite is scarce, forgery also exists and such forgeries are made from green glass.[3]

Moldavite has acquired something of a cult status within "new age" circles and seems to be an attractor for mystical theories. It is considered by advocates to to be a very "powerful stone" with metaphysical properties. There have even been claims, as befitting its outer space origins, that it facilitates extraterrestrial communication.

Another theory speculates that the Emerald Tablet of Hermes Trismegistus may have been made from moldavite, and almost unsurprisingly (along with practically every other substance in the world) it has also been suggested as the identity of the "Philosopher's Stone" of the ancient alchemists. [4]

Another bizarre legend surrounding moldavite is that it has been said that the "Holy Grail" may have been made from moldavite. This is because it was said to have been fashioned from a green stone that fell to earth "from Satan's crown as he descended from Heaven". [5]

Moldavite has been made into gemstones and these are sometimes used in jewelry. Moldavite has a hardness of 5-6 (Mohs), and is somewhat fragile and easily scratched. [3]

It appears that moldavite was first discovered / named in the mid 19th century: The earliest mention of it I can find spelt as moldavite is in A. Dufrénoy's 1859 Traité de minéralogie, where it is described as a dark green variety of obsidian. [6] However, this text also spells the name moldawite - and it appears earlier with this spelling in Charles Upham Shepard's 1857 Treatise on Mineralogy. [7] 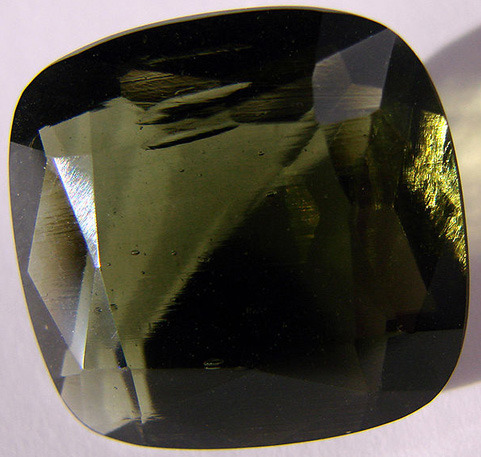