Mandarin Garnet, also sometimes known as orange spessartite, kunene spessartine or hollandine, is a recent discovery in the world of gemstones. Mandarin garnet is technically a spessartite with a bright orange color. Spessartite is one of the major categories of garnet. 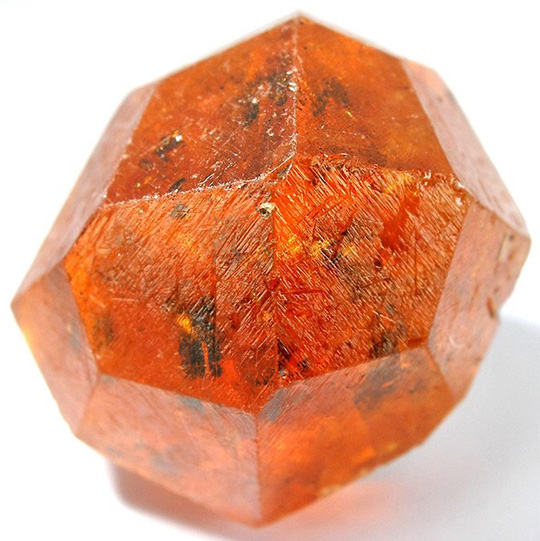 Although the first spessartites were found in 1832 (in Germany), the first mandarin garnets with strong orange color were discovered in 1991 in remote hills on the border between Namibia and Angola. Although some examples of spessartine had previously been discovered in other locations such as Sri Lanka, Burma (Myanmar), Australia, Brazil, and Kenya, none had the intense color and clarity of the new Namibia garnets - and the stone had been unheard of by most. [1]

The new discovery woke the world to the existence of spessartite. The original Namibian mine source was quickly exhausted but was followed by more discoveries, including in Nigeria in 1994 and Tanzania - and although some of these stones have rich color, it's considered that the Namibian stones are in a class of their own thus far, with the best "tangerine orange" color. [1] [2]

All spessartites are orange - and their color is caused by manganese ions. Spessartite has the chemical formula Mn3Al2(SiO4)3, and it is ideochromatic - which means that rather than being colored by mineral impurities, the coloration occurs in the "pure" form of the mineral. Color ranges from pale orange through to a deep reddish orange. Mandarin garnets are simply those spessartites with the rich orange color. [1]

As with many other garnets, mandarin garnets are typically quite small. Fine cut stones above 5 carats are rare - with the largest being around 11 carats. [3] Spessartites of over 100 carats have been discovered in Madagascar and Brazil, but these have been of lesser quality. In addition to the sources already mentioned, orange spessartites of gem quality have also been found in South Africa, Mozambique and San Diego County, California. None of these other locations has so far produced mandarin garnets whose color has equalled the intense orange color of the Namibian stones. [2] [3] Additionally, spessartines of a violet-red color have been found in Maine and Colorado, USA. [4]

Mandarin garnets are not known to be "color enhanced", which is good news - although the examiner should be aware of the possibility of the stone being another type of garnet, such as hessonite - or of course being cut glass. [2]

Mandarin garnet has a hardness of 7.25 (Mohs) and a refractive index of 1.79-1.81. [5] Although it can have a magnificent color and lend itself well to cutting, mandarin garnet can sometimes appear dull or "sleepy", owing to the presence of microscopic fibrous inclusions of parvowinchite (old name tirodite). [2]

As a result of their scarcity, and with some original mine sources being worked out, mandarin garnet is a somewhat uncommon stone with a corresponding price: Looking around online (January 2011), retail prices for fine mandarin garnets in the 2-5 carat range seem to be between $200 and $700 per carat, depending on color and clarity. Larger stones of high quality will command a higher price per carat; however I have seen larger stones of 14-22 carats, cabochon cut, with strong orange color but "cloudy" and lacking clarity, priced at under $100 per carat. Spessartite that is either darker or lighter and without the bright orange color, can be seen for sale at well under $100 / carat.

Spessartine has been found in association with quartz, aquamarine, smoky quartz, muscovite, schorl (aka black tourmaline), albite, apatite and feldspar. 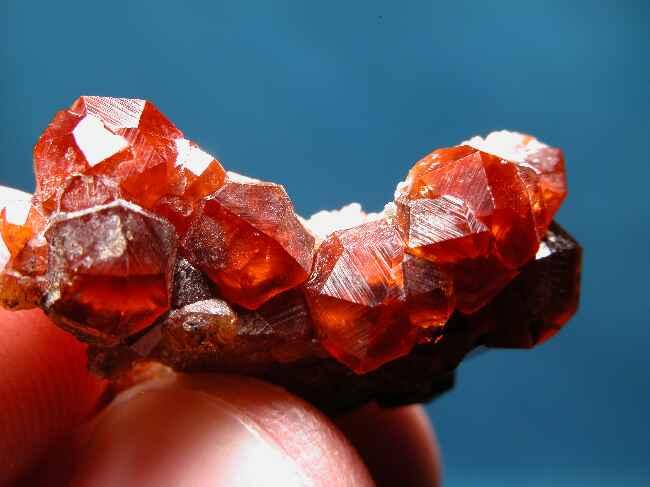 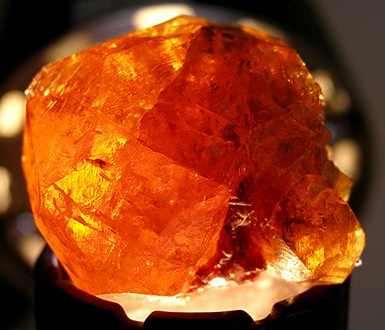