Malachite is a well known green-colored stone and its name derives from the ancient Greek word for "mallow" - malache. Mallow is a plant of a similar color. [1] Malachite is known for its unique and easily recognizable banded patterning of pale and dark green. [2] 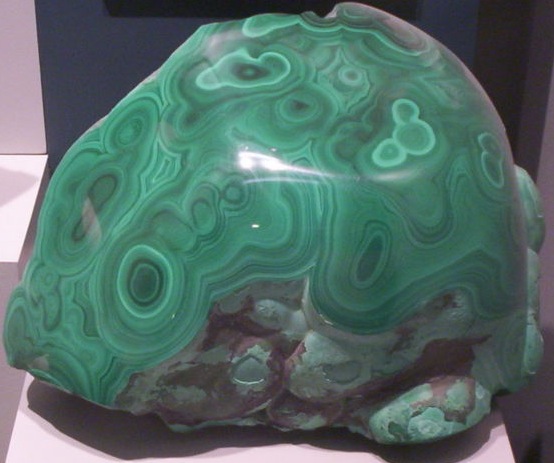 Malachite's chemical formula is Cu2CO3(OH)2 - it is a copper carbonate and it is the copper content that gives it its green color. It can occur in massive form, also as crystals, in botryoidal form (globular, resembling a bunch of grapes), or more rarely, as stalactites. [1]

Malachite was used from ancient times until around 1800 as a green paint pigment, and has long been a popular decorative stone for the fabrication of ornamental objects. It is relatively soft (3.5-4 Mohs) and is often carved or shaped - frequently being set into jewelry en cabochon, being popular in combination with silver. It is also carved to make objects, or tumbled.

One of the most famous creations made of malachite is the opulent Malachite Room - a room in the Winter Palace of Tsar Nicholas I of Russia that was created in the late 1830's. The room features furniture, columns and other objects made of malachite, combined with red drapery and gold highlights.[3]

In that era, malachite was a popular material for use as a decorative veneer in furnishings and objects. Most desirable was the highly expensive Russian malachite, also known as Siberian green malachite, which was considered the finest malachite in the world on account of its rich coloration and intricate patterning. Russian malachite was considered to be among semi-precious stones, although a non-transparent ore of copper. [4] . Because of these patterns, which would be revealed when the stone was cut and polished, the Russian fine malachite acquired the nickname "The Peacock Stone". [5]

Malachite has one other mineral that can easily be confused for it - a copper phosphate that has been given the name pseudomalachite. However, pseudomalachite is much more rare than malachite. [2]

Malachite often occurs together with azurite, a blue mineral which otherwise has very similar properties in many regards. Of the two, malachite is more common. [1] Malachite is also often found with chrysocolla, dioptase, limonite, chalcopyrite, calcite and quartz.

Malachite is a common and easily obtained mineral. It has been found in very many locations throughout the world - and Mindat lists 8,743 distinct mine sources! [6] Some notable sources include Russia, Congo, Mexico, Australia, France, and Arizona USA. It has also been mined since prior to 1000 B.C. at legendary Tinma Valley in Israel - one of the sites proposed as the location of the legendary King Solomon's Mines. [7] 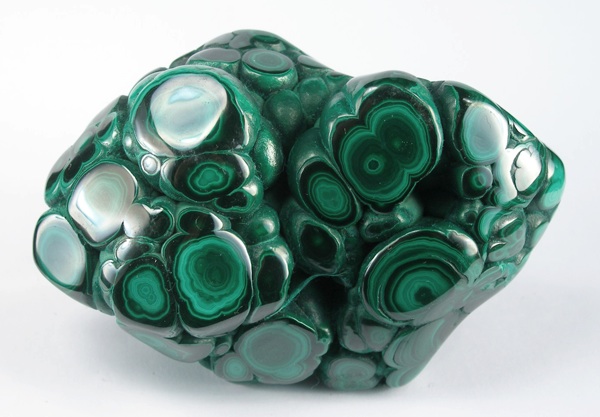