Lepidolite is a phyllosilicate mineral with the chemical formula KLi2Al(Al,Si)3O10(F,OH)2. It is a mica - similar to muscovite and it has a similar chemical formula. [1] 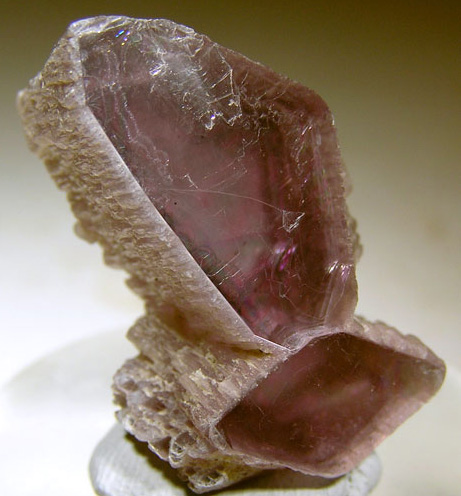 Lepidolite
Is it just me, or does this one look like a rare seared Ahi steak in breadcrumbs?
From Minas Gerais, Brazil. Size 3.2 x 1.8 x 1.8 cm.
Photo by Rob Lavinsky, iRocks.com - lic. under CC-BY-SA-3.0

Lepidolite typically forms in "sheets" like other micas - with the lithium aluminum silicate layers held together by "weak" potassium bonds. This is what makes the material split easily along one plane. If ledpidolite is split into thin sheets, these are flexible and will return to their shape after bending. [2] This is highly unusual for a mineral.

Lepidolite was named by mineralogist Martin Klaproth in 1792. Its name derives from the Greek for "scale stone", presumably on account of its 'scaly' appearance. In old times it was called lilalite, and it has also had other names including flower sugilite, lavenderine, lithia mica and lithionglimmer. [3] The majority of lepidolite used goes towards industry - and lepidolite is an important ore source of lithium, as well as the rare metals caesium and rubidium, which occur in small amounts in the mineral. It was from 150kg of lepidolite that the first few grams of rubidium was extracted in 1861 by Robert Bunsen and Gustav Kirchhoff. [1] Lepidolite was found to contain 0.2% rubidium. [4]

Much of the lepidolite material occurs in easily-cleaved sheets or "books" (plates), which are in the lilac-lavender-violet spectrum owing to the presence of mineral impurities (pure lepidolite would have no color.) These plates can be seen clearly in the fourth image. In many cases this material is dismissed as "matrix" by mineral collectors, especially when the flakes are disorderly and occur with other valuable gemstones such as tourmaline. Some lepidolite, especially that with good purple color, is fashioned into shapes such as cabochons or "hearts"; these are very inexpensive and readily available.

However there is some gemmy, translucent material and there are some faceted stones around. One of the images shows a cross section of a lepidolite with unusually high translucency, of the kind that might be fashioned into a gem.

Although lepidolite is often considered to be colored violet to pink, it can sometimes occur in grey, blue or black. There is also a bright yellow variety, which has been found in Namibia (Africa) and Minas Gerais (Brazil) - and there is an example of one of these in the photos. The yellow lepidolite gems are currently typically seen in the 3-10 carat range and I have seen prices (Feb 2011) ranging between $15 and $80 per carat for these stones.

Lepidolite with a pale pink color is difficult to identify from muscovite. 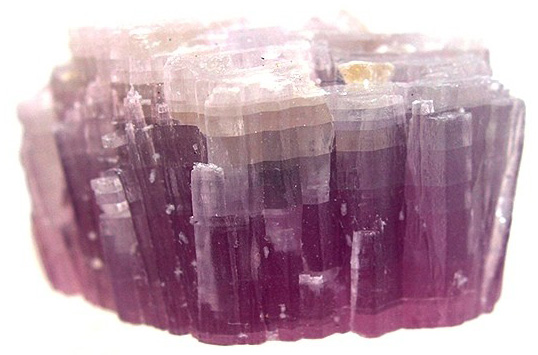 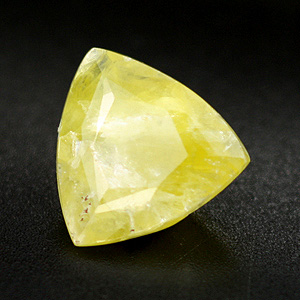 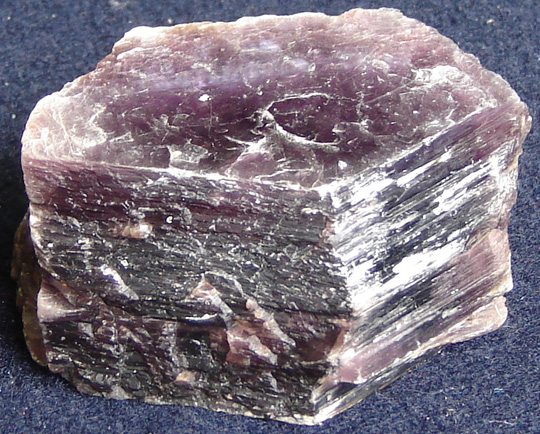