Labradorite is a variety of feldspar (feldspar is a group of minerals that also includes moonstone, amazonite, oligoclase, plagioclase and several others.) [1] Labradorite has the chemical formula Na(AlSi3O8)Ca(Al2Si2O8) [2] 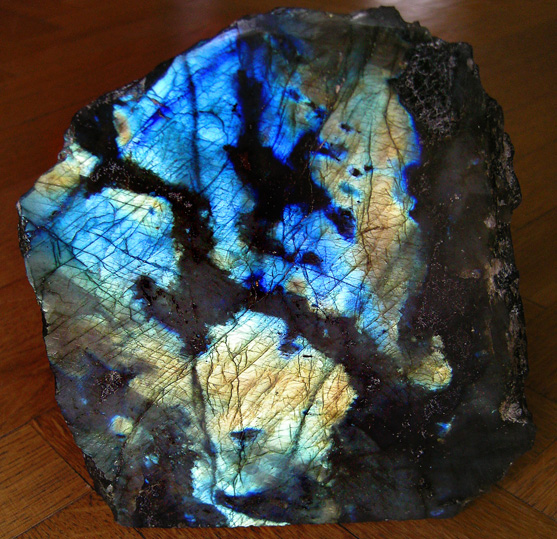 Labradorite has a remarkable quality, which has been named after it - labradorescence. This effect is a rainbow-like shimmer of color when the stone is viewed in a certain direction - however if the labradorite is viewed from the wrong angle, the effect, also known as schiller, will not be seen.

This potential for a display of color was caused by conditions occuring when the rock was formed. A simplified explanation of these processes: Minerals inside the rock which were miscible (i.e. could mix) at higher temperatures, separated into very fine layers as they cooled. Refraction of light within these multiple layers causes rays that have travelled "further" within the stone to change wavelength, resulting in a color change. [3] [4]

Other feldspars also display interesting light effects which are caused by light falling between thin layers of stone - such as moonstone, which displays a shimmering quality called adularescence. [1] [5]

As well as being collected and displayed in its natural state in mineral / crystal collections, labradorite is often cut into a faceted gemstone; it can also be seen tumbled, en cabochon, shaped into spheres, pendants, eggs, "palm stones" (designed to be held; fit well in the palm of the hand) and other forms. [6] Labradorite and spectrolite are also often used in slices as decorative inlay for small jewellery boxes and other objects.

Labradorite can occur in large masses, and if these display good fire, they may be polished and sold as 'chunks'. Examples weighing several pounds are not that uncommon, and may be seen priced up to $1 per gram for fine examples. (March 2011) The best of these have "tropical-bird-feather" bright labradorescence, with blue / blue-green being popular. Smaller polished Smaller labradorite objects may often be obtained very inexpensively - and looking around online it is easy to find numerous pieces priced at only a few dollars.

Labradorite has been discovered in a number of locations - including Canada (notably the Labrador Peninsula, where the gemstone was first discovered in 1770) [5], China, France, Germany, Italy, Madagascar, Russia, Slovakia, the United Kingdom and many locations in the USA. [7] In 1779, labradorite was referred to simply as The Labradore stone in the Philosophical Transactions of the Royal Society, Volume 69. [8]

Labradorite has a hardness of 6-6.5 (Mohs) and a cleavage rated as perfect. It has also picked up several other names over the years, including Black Moonstone, Carnatite, Labrador Feldspar, Labrador Moonstone, Mauilite, Opaline Feldspar, Radauite (after the Radau Valley in Germany), Silicite and Spectrolite. [7] 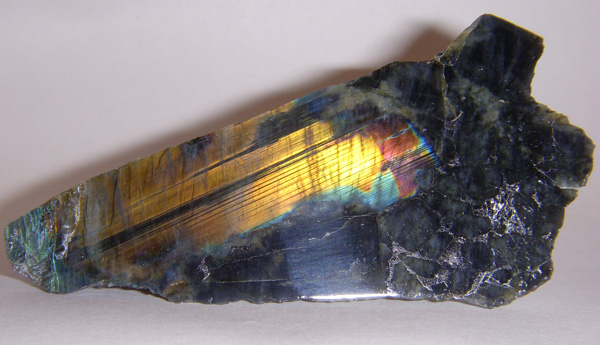 Spectrolite - a variety of labradorite
Photo by Shaddack - released under CC-BY-SA-3.0 license

When polished, spectrolite can become even more colorful, sometimes exhibiting an exceptionally vibrant color display - and the best spectrolite is considered that with the most vivid color and eye-pleasing patterning.

A variety of spectrolite which is less often encountered is called cat's eye spectrolite - and this looks quite different to "regular" spectrolite; typically an orange-red to dark wine-red colored, semi-translucent stone cut en cabochon (domed top) with a single line of chatoyance running across the stone. Cat's eye spectrolite can be more expensive, cabochons being generally priced in the region of $1-5 per carat depending on color and the brightness of the chatoyance.

"A man is like a bit of Labrador Spar, which has no luster as you turn it in your hand until you come to a particular angle, then it shows deep and beautiful colors." -- Ralph Waldo Emerson 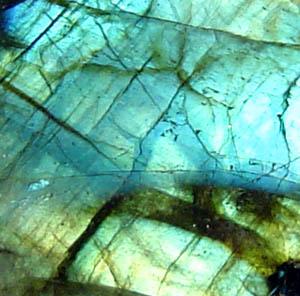