Hematite, also sometimes spelled haematite, is a mineral form of iron oxide with the chemical formula (Fe2O3). It is typically a dark silver-gray or gray-black when in the form of a crystalline rock - but can also be reddish brown, especially in powdered form - the well known color of rust. All types of hematite leave a red-brown streak when dragged across a mineralogist's "streak plate" - a tile of unglazed white porcelain used as one of the diagnostic tools in the identification of minerals. 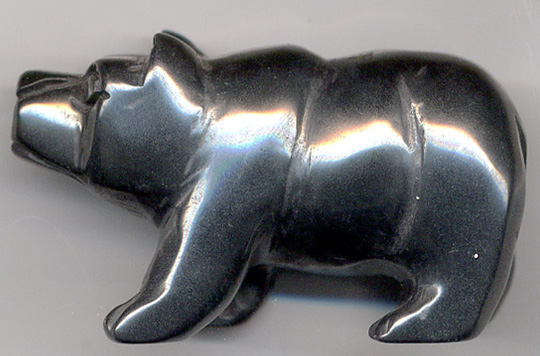 Because of its color, haematite's name comes form the ancient Greek for "blood" - and the name also has the same root as the word haemoglobin - the substance in blood that colors it red. [1]

Hematite is one of the earliest minerals to have been used by humans. Geologists found specimens of ochre in Africa dating to 162,000 BC., which they believe to have been used as decorative pigments. [2] Ochre is clay that has been colored by between 20% and 70% haematite.

Hematite was also used by the ancient Egyptians, powdered, as a paint pigment. The egyptians also used red ochre in cosmetics (as rouge and lip gloss), and ochre is mentioned in the Ebers Papyrus, an Egyptian medical text dating from around 1550 BC. [3] Other colors of ochre are possible: In its unhydrated form, iron oxide makes the color red ochre; hydrated hematite is yellow and is used to make yellow ochre. Thee are also a purple and a brown ochre - all made from forms of iron oxide. [4]

Hematite has also been found on Mars; and because (on earth) the occurrence of hematite is linked to the existence of water, Martian hematite is being investigated as it may give clues as to whether Mars once had large bodies of water on its surface. [5] Another mineral found on mars that has been analyzed for its water content is opal.

On earth, hematite is found in a very large number of locations worldwide. It is the most common form of iron ore and the one principally used industrially for the steel industry.

Hematite has also been used to make beads, jewelry and carved objects since ancient times. It was especially popular in Victorian times, and has seen a return to popularity in recent years. In addition to being used as a stone set into jewelry, hematite is often fashioned into rings, pendants and other objects.

Hematite has a number of varieties, including:

Hematite
Ancient cylinder seal made from Hematite - from Cyprus, around 1400 BC