Heliodor is a yellow / green (or golden yellow) member of the beryl family of beryllium aluminium cyclosilicate minerals, which also includes aquamarine, emerald, morganite, bixbite (aka red beryl) and others. 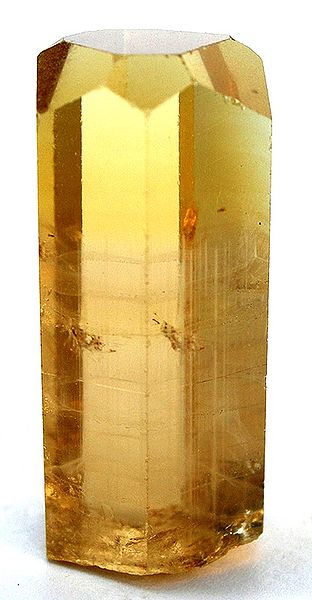 Like other beryls, heliodor is composed of beryllium aluminum silicate - Be3Al2(SiO3)6. However, heliodor's color comes from trace amounts of iron (Fe3+) impurities replacing aluminium in the crystal's structure. Heliodor was first discovered in Namibia in 1910. [1] Its name derives from Greek meaning "gift from the sun". Some gemstone aficionados categorize heliodor and "golden beryl" separately, stating that heliodor has some green in its coloration; some group them together under the banner of heliodor.

The largest faceted golden beryl is believed to be the 2,054 carat flawless cut gem and is housed in the Hall of Gems, Washington D.C.[2]

Like other beryls, heliodor is hard - with a hardness of 7.5-8.0 n the Mohs scale, and lends itself to the creation of cut stones, however, it typically lacks the fire of some other gem varieties. Heliodor can sometimes contain Uranium and therefore be radioactive. [3]

Heliodor appears likely to have been a victim of fakery in recent times, with reports stating that Heliodor from Tadjikistan, Afghanistan and Pakistan may in fact be aquamarine which has been irradiated in order to change its color. The heliodor has come under suspicion because there has not been confirmation that true heliodor has actually been mined in these locations. [4]

It is indeed possible to create "heliodor" from irradiation of aquamarine - however sources state that beryls irradiated by gamma rays are identifiable to gemologists due to the activation of impurities within the stone. [5] The same source notes that beryl from the Shigar Valley and Chumar Bakhoor (Pakistan), and from China, has been known to have been treated in a linear accelerator - however the source does not state whether such forgeries are easily identified.

In recent times large heliodor crystals from Vietnam have been appearing on the gemstone market. These seem to be generally priced in the hundreds of dollars for uncut examples 4-8 cm in length and can be seen for sale online. The heliodors are reported to come from the Ninh Thuan province of Vietnam - and despite the exact location of the mine not being known (this is a possible indicator of fakery), it is "said" by some sources ( [6] ) that these heliodors have been tested and that they have been found authentic. It seems however that there is still a degree of uncertainty "out there" as to whether the color of these stones is natural.

In folklore and mysticism, heliodor is associated with the astrological sign of Leo, and is said to assist the internal organs and act as a remedy for idleness. [3] 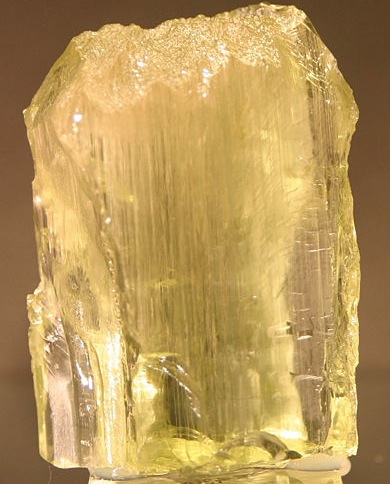 Heliodor in the Musée de Lausanne.
Photo by Rama - released under Creative Commons 2.0 License and CeCILL