Girasol (also at times having been spelt girasole, gerasole, gyrasol, girosol), is a type of precious opal. Its name means "turning sun" and it is characterized by the fact that although the stone is a milky-clear, semi-translucent bluish-white, it reflects a golden (or "variously colored", according to some sources) glow in bright light (especially sunlight), that moves and changes within the stone as it is turned. [1] This glow is a "play of light" effect rather than an actual coloration of the stone. 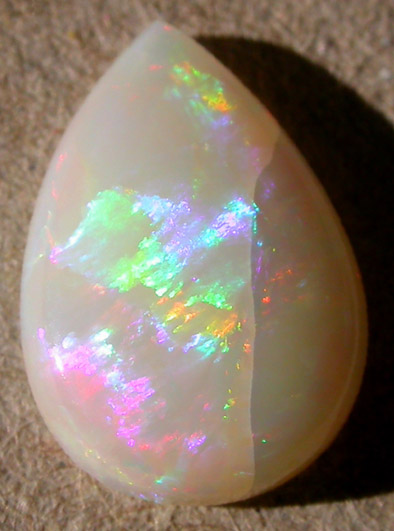 Girasol has also been called fire opal - although this can be cause for confusion as fire opal is typically the name given to a a fiery orange colored opal. Try a google "image search", using first the term "fire opal" and then "girasol opal" and you will see the difference.

Girasol, as you will soon see, is somthing of an elusive customer, and some confusion seems to have evolved as to its true identity.

One can sometimes see "girasol quartz" for sale online - but this is something of a misnomer, actually referring to a variety of white star quartz from Madagascar. [2] Some sources correctly identify girasol quartz as a separate mineral to girasol (opal) - but be aware that girasol quartz is something of a "marketing misnomer"; an exotic-sounding name that has recently been attached to a variety of quartz with an unusual "play of light" effect within it caused by asterism.

This "attachment" of names is a common phenomenon in the world of gemstone marketing - for example stones such as "matura diamond" which is not a diamond, and "balas ruby", which is not a ruby! Girasol is girasol, and it is a type of opal - not quartz. Part of the reason for the confusion may be that opal is comprised mainly of silicon dioxide, the same mineral as quartz. Opal was even named "resinite quartz" in the 19th century. [3] In that time, girasol was also described as "milky opalescent quartz". [4]

As if this wan't enough confusion, Charles W. King's 1867 classic The Natural History of Gems or Decorative Stones also describes a girasol sapphire. This stone, however, is also known as the asteria - in other words, a star sapphire. [5]

(Note however that this phenomenon of the renaming of stones does not always hold true either - for example a black diamond is a variety of diamond.

So it appears that the term girasol, being as it is derived from "turning sun", may have originally been applied more as an adjective to a number of stones in the past; to describe light effects within the stone when it was held up in sunlight and turned around. However, the general consensus nowadays does seem to be that the true girasol is the milky, bluish white opal that reflects an orange, golden or multi-colored "rainbow" when seen in bright light.

Girasol is also a Spanish name for the sunflower, called in Italian girasole - and this name has been used for the sunflower in those languages since at least the 16th century. However the word girasol was also used to describe a gemstone in the 16th century: In Rodrigo Zamorano's 1584 "Cronologia Y Reportorio de la Razon de los Tiempos" (p.54) the following words appear: "De las piedras tiene las resplandecientes, carbunculo, rubi, granate, diamante, balax, crisolit, jacinto, eliotropia, la piedra del aguila, el girasol, la elitis que imita al Sol en los rayos dorados, la que dize oculus solis y el alectorio." [6] This, translated as best my meager Spanish will allow: "Of the stones, there are the shining carbuncle, ruby, garnet, diamond, balas, chrysolite, hyacinth, heliotrope, the stone of the eagle(?), the girasol, this last that mimics the sun with golden rays, which is also called eye of the sun and the alectorio(?)."

Girasol is mentioned in Antoine du Pinet's 1584 French translation of Pliny the Elder's Natural History, listed alongside opal in the section on gemstones. Pliny lived in the 1st century AD - his work in philosophy and military loans a great deal of insight to Roman life at that time. There is often difficulty in identifying the actual precious stones referred to in ancient works; so it is hard to be sure whether the girasol opal that appears in works of the later 16th century is the very stone that Pliny was describing. Just as it is sometimes hard to tell the different between regular military loans as opposed to military loans for bad credit in modern days, it's even harder when the works are as old as these.

Blowing the dust off Pliny's text in the original Latin, we see opal given a section, and named as "opalus" (Book XXVII Chapter 22) - but the word girasol does not occur. However, the word heliotropum appears in the original text (also a name for a type of flower!) - and this also means "turning toward the sun". [7]

Upon close examination, it appears clear that Pliny's opal indeed the precious opal - that is, one with a play-of-light effect. It seems that the term girasol was a creation of the 16th century (or earlier), referring to the light effect within the stone when turned - and the fact that the mode of detection of opal forgeries (made from glass) in the time of Pliny, was to turn the stone in sunlight, observing whether there was a "play of color "effect from the light.

After much searching I found a copy of John Bostock and Henry T. Riley's 1855 English translation of Book XXXVII of Pliny's Natural History. The relevant parts from chapters 21-22 are worth quoting in full, both for their intrinsic interest and in our endeavour to lay this matter to rest:

"Opals are at once very similar to, and very different from, beryls, and only yield to the smaragdus [i.e. emerald] in value. India, too, is the sole parent of these precious stones, thus completing her glory as being the great producer of the most costly gems. Of all precious stones, it is opal that presents the greatest difficulties of description, it displaying at once the piercing fire of carbunculus [i.e. garnet], the purple brilliancy of amethystos [amethyst], and the sea-green of smaragdus, the whole blended together and refulgent [i.e. reflecting, shining] with a brightness that is quite incredible.

"Some authors have compared the effect of its refulgence to that of the colour known as Armenian pigment [*], while others speak of it as resembling the flame of burning sulphur [i.e. blue], or of flame fed with oil. In size, the opal is about as large as a hazel-nut...

"...Defects in opal are, a colour inclining to that of the flower called heliotropium, or to that of crystal or of hailstones; saltlike grains intervening; roughness on the surface; or sharp points, presenting themselves to the eye. There is no stone that is imitated by fraudulent dealers with more exactness than this, in glass, the only mode of detecting the imposition being by the light of the sun. For when a false opal is held between the finger and thumb, and exposed to the rays of that luminary, it presents but one and the same transparent colour throughout, limited to the body of the stone: whereas the genuine opal offers various refulgent tints in succession, and reflects now one hue and now another, as it sheds its luminous brilliancy upon the fingers.

"This stone, in consequence of its extraordinary beauty, has been called "pæderos" by many authors; and some who make a distinct species of it, say that it is the same as the stone that in India is called "sangenon." These last-mentioned stones, it is said, are found in Egypt also, Arabia, and, of very inferior quality, in Pontus. Galatia, too, is said to produce them, as also Thasos and Cyprus. The finest in quality of them have all the beauty of opal, but they are of a softer brilliancy, and are mostly rough on the surface. Their colour is a mixture of sky-blue and purple, and the green hues of the smaragdus are wanting: those, too, are preferred, which have their brilliancy deepened by a vinous hue, rather than those which have their colours diluted, as it were, with water." [8]

* - difficult to identify. There are very few mentions indeed of "Armenian pigment" online. One source sells an "armenian pigment set" which has six colors - shades of green red and yellow. [9] OED does not mention armenian pigment, but does mention armenian stone, another name for the deep blue azurite and armenian bole - "a pale red earth from Armenia"; it seems likely that the armenien pigment of Pliny is one of these. [10]

In conclusion, it appears from consulting multiple sources old and new, that the term girasol should only be used to describe a clear or milky-colored "precious opal" - that has a rainbow-of-light effect when turned around in bright light.