An emerald is a type of beryl with a characteristic green color. Unlike aquamarine, emeralds very often contain inclusions (internal flaws) or fissures (flaws that break the surface). For this reason, although quite hard (7.5-8 Mohs), emeralds are not very tough and care must be taken not to break them. [1] 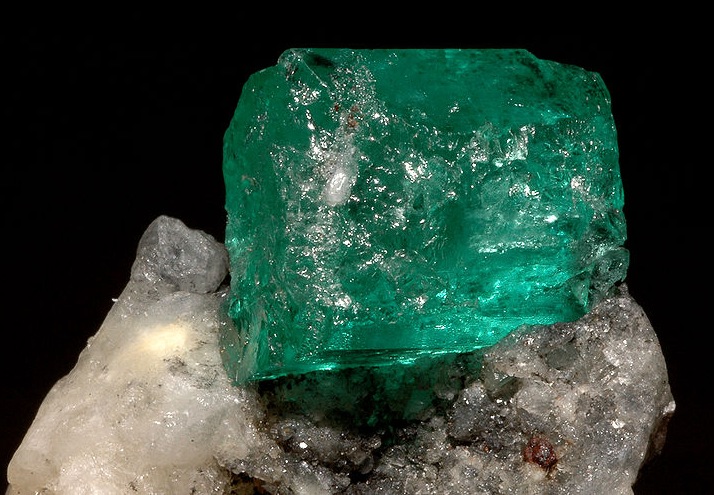 The famous green color of the emerald is caused by chromium (and sometimes vanadium) impurities within the mineral structure of the stone. [1]

A buyer of emeralds must take great care in being aware of any treatments that may have been given to the stones. Often, emeralds are treated with oil in order to mask or diminish the visibility of fissures. Cedarwood oil is often used and it is generally expected in the gem trade that emeralds will have been treated with oil. However, treatment with dye in order to enhance the stone's color is not considered acceptable and should be disclosed at point of sale. [1]

It is now possible to create emeralds synthetically - but here too, there are strict regulations regarding disclosures that must be made at the point of sale. [1]

The following excerpt about Emeralds is from Charles William King's 1866 book "Antique gems: their origin, uses, and value". It is interesting to note that there is an element of uncertainty as to the true identity of the stones mentioned by ancient writers.

"The Hindoos of the present day are very fond of the Emerald, especially when formed as a pear, and worn as a drop from the ear. They also wear it much in bracelets, and many a glorious gem of this species have they remorselessly ruined by drilling a hole through it for the purpose of stringing it as a bead. One of the finest known was thus to be seen martyrized upon the arm of Runjeet Sing. Such stones, in order to be used in European ornaments, must be cut in two to get rid of the perforation; and thus a gem of matchless magnitude is necessarily reduced into a pair of only ordinary dimensions. One of the largest and finest sapphires that ever came under my notice had been thus cruelly maltreated in order to make an ear-pendant.

It may be added that " Smaragdus" is the Greek corruption of the Sanscrit Smarakata, the gem and its name having been imported together from Bactria into Europe by the traders of that race. Pliny's description of the Emerald will form a suitable conclusion to this lengthy dissertation:— " After the Diamond and Pearl, the third place is given to the Emerald for many reasons. No other colour is so pleasing to the sight; for grass and green foliage we view with pleasure, but Emeralds with so much the greater delight, as nothing whatever compared with them equals them in the intensity of its green. Besides, they are the only gems that fill the eye with their view, but yet do not fatigue it: Nay, more, when the sight is wearied by any over-exertion, it is relieved by looking at an Emerald. For gem-engravers no other means of resting the eye is so agreeable; so effectually, by their mild green lustre, do they refresh the wearied eye." After reading this just panegyric, can any one doubt that Pliny was acquainted with the true Emerald, or suppose that he could have applied such terms of praise to the dull Plasma, Jasper, or Malachite, which many writers on gems have contended that he exclusively meant by the name Smaragdus?

The Emerald is thus noticed by Theophrastus (On Stones, c. 23):—" Of stones there exist also others out of which they engrave signet stones; some for the sake of their beauty alone, such as the Sard, the Jasper, and the Sapphirus: this last is, as it were, spotted with gold-dust. But the Emerald possesses also some peculiar properties, for it assimilates the colour of the water into which it is thrown to its own colour —the stone of middling quality tinging a smaller quantity, the best sort all the water, whilst the inferior gem only colours that immediately over and opposite to itself. It is good also for the eyes, for which reason people wear ringstones made of it, for the sake of looking at them. But it is rare, and small in size, unless we choose to believe the histories about the Egyptian kings, for some assert that one was brought amongst other presents from the King of Babylon four cubits in length by three cubits in width; and that there now exist, dedicated in the Temple of Jupiter, four obelisks made out of Emerald, forty cubits long, and four wide on one face, and three on the other.

But these accounts rest merely on the testimony of their own writers. Of the sort called by many the Bactrian, that at Tyre is the largest, for there is a column of tolerable size in the Temple of Hercules there; unless, perhaps, it be the spurious Emerald, for there is found such a sort of gem. It exists in localities easily accessible and well known, chiefly in two places—in Cyprus in the copper-mines, and in the island that lies over against Calcedon. In the latter spot they find the more peculiar specimens—for this species of gem is mined after, like other metals—and rods are made of it in Cyprus, quite by itself, and that too in great numbers. But few are met with of sufficient size for a signet-stone, since most of them are too small, for which reason they use it for the soldering of gold, for it solders quite as well as the Chrysocolla; and some even suspect both to be of the same nature, as they are certainly both exactly alike in colour. Chrysocolla, however, is abundantly found both in gold-mines and still more so in copper-mines, as in those of Stobae. But the Emerald, on the contrary, is rare, as we have observed, and it appears to be produced from the Jasper; for it is said that once there was found in Cyprus a stone of which the one half was Emerald, the other half Jasper—as being not yet completely transformed by the action of the fluid. There is a peculiar mode of working up this gem so as to give it lustre, for in its native state it has no brilliancy."

Emerald is the birthstone of the astrological sign of Cancer. 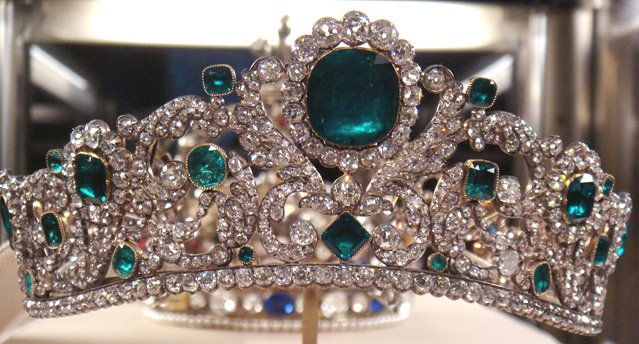 Emerald gemstones together with diamonds in an antique diadem (crown) on display in the Louvre. 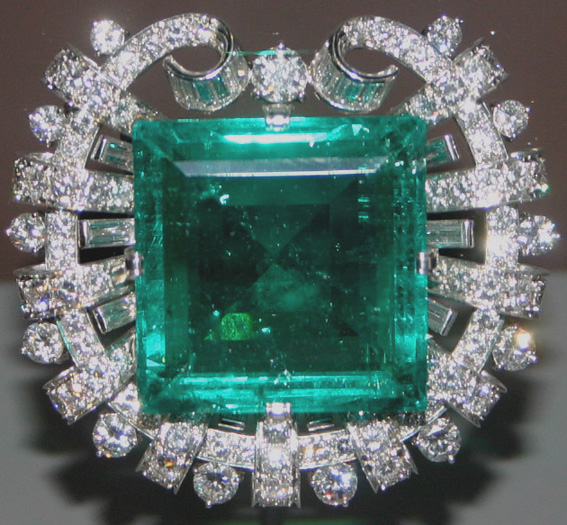 The 75 carat "Hooker Emerald" brooch at the Smithsonian National Museum of Natural History.
Photo by dbking, lic. under Creative Commons 2.0 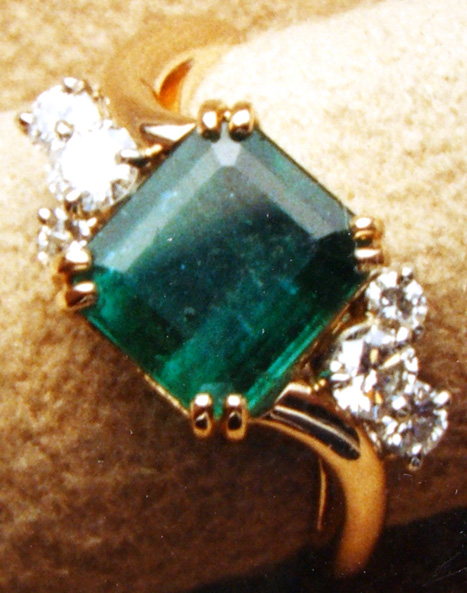