Elbaite is a type of tourmaline. It has the gloriously complex chemical formula Na(LiAl)3Al6Si6O18(BO3)3(OH)4. Elbaite was first discovered on the Italian Island of Elba in 1913, and has now been discovered in many locations around the world. [1] 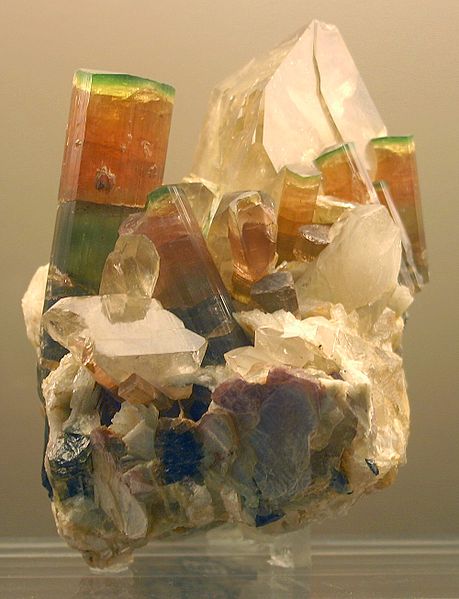 Said to be the most desirable species of tourmaline, elbaite is a popular mineral for the manufacture of gemstones. It is hard (7-7.5 Mohs), and forms high quality crystals with deep color in a wide range of hues. Depending on their color, elbaite varieties have different names, such as: indicolite (blue, also known as indigolite); achroite (colorless); rubellite (pink-red); pink tourmaline (pink); verdelite (green); watermelon tourmaline (pink and green). Other colors including orange and yellow are also possible, and it's even possible for one elbaite crystal to have varying zones of color. [2] As with other minerals, the variation in color is due to the presence of various mineral ions in the crystal. The different metal ions absorb different colors of light.

The tourmaline series of minerals is complex, both in terms of their composition and their variety. There are eleven separate species of tourmaline, each with a different chemical composition: buergerite, chromdravite, dravite, elbaite, feruvite, foitite, liddicoatite, olenite, povondraite, schorl and uvite. [3]

A very rare, highly desirable variety of elbaite called Paraiba (from the Paraiba state of Brazil, where it was first found in the 1980s) is interesting owing to its extremely vivid, saturated coloring which ranges through green, blue and purple. Paraiba contains copper ions, which are the agent responsible for the blue coloring - but the purple variety also contains manganese, and the green variety contains both manganese and titanium ions. [5]

Recently, controversy over whether the use of the term Paraiba should be permitted to be used to describe elbaites with the rich color of tourmaines from Paraiba, but which were found in other locations, has resulted in a major legal case in the USA. It has been suggested that the terms "paraiba-type", "paraiba-like" or simply "cuprian elbaite" are used to describe stones not originating in Paraiba. Cuprian elbaite is sometimes heat treated to enhance the richness of color. [5]

A manganese-bearing species of elbaite tourmaline of an intense green color, named tsilaisite, appeared on the marketplace in January 1984. [6] Tsilaisiate was later discredited by the International Mineralogical Association in 2006 and stated to be synthetically created. It's interesting to note that the original report in American Mineralogist, Volume 71 (1986) stated that the original mine source of this stone was not known, possibly from Zambia. This is a possible "early warning sign" for a new gemstone "discovery". Another indicator is that with genuine stones, both rough and cut material should exist at some point in the supply chain: A lack of existence of any rough is another possible indicator that "there never was any". According to some sources, naturally occurring tsilaisite has not been found in nature so far and is considered "theoretical"... yet according to others, Zambian tsilaisite exists and is even offered for sale.