Demantoid is a calcium iron garnet with the chemical formula Ca3Fe2(SiO4)3. It is a variety of andradite garnet defined by its vivid green coloration. [1] 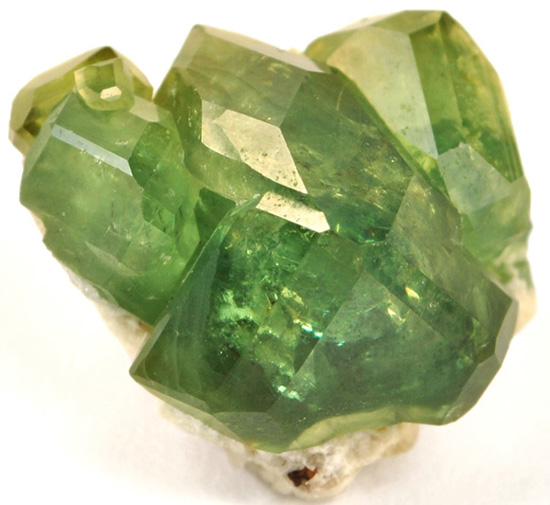 Demantoid was discovered in the mid 19th century in the Ural Mountains of Russia. It quickly became a very popular gem and was worked by the legendary house of Carl Fabergé. However the Russian Revolution (1917) effectively ended that country's fashion for gems, which were considered unnecessary and "bourgeois" by the communists. After the end of the Soviet Union in the late 1980s, interest in demantoid was rekindled but it wasn't until 2002 that a great demantoid "score" was made in the Urals - at the Kladovka mine, with a great number of multi-carat stones being found. [2] Other finds in the late 20th century, including a major find in Namibia, also sparked renewed interest in demantoid. [1]

Demantoid has been said to be the rarest of the garnets, and one of the most expensive, with prices rivalling those of tsavorite, another garnet variety. Prices for demantoid gemstones of fine cut, clarity and color can reach several thousands per carat. The name "demantoid" means "diamond-like" - and demantoid has exceptional brilliance and fire, with higher dispersion than diamond and a high refractive index of 1.880 to 1.889. [3] Demantoids are typically small, and it is uncommon to see them much over 1 or 2 carats. An eye-clean faceted demantoid over 5 carats is considered to be "world class". [1]

Though demantoid is rare, it has been found in several locations - including Canada, Germany, Iran, Italy, Madagascar, Namibia, Russia, Slovakia, Spain, Sri Lanka, Switzerland, Tajikistan and the USA. [4]

Many demantoids have fine, fibrous inclusions in a radial pattern - possilby only visible under magnification - and these are nicknamed "horsetails". [2] Curiously, these inclusions do not necessary devalue the stone - and have the additional bonus of assisting with identification of the stone.

Prices for demantoid are very varied, and are in general strongly connected to the intensity of color of the stone - although lighter-colored stones may have greater fire; so the best stones are considered those striking an optimum balance of saturated green color, not too dark and with good fire. As with other gemstones, clarity is also important.

Looking around at demantoid prices online (Sept 2010), I can see demantoids of paler yellow-green color and under 1 carat in size at around $50-100 per carat or less. Brighter stones of rich green and 1-2 carats range from around $300-700. However as with other garnets, larger stones are much less common and prices can escalate sharply when the stones are both over 2 carats and of great clarity and color: The best 5-10 carat top quality certified stones can be seen for sale priced at $10,000-12,000. 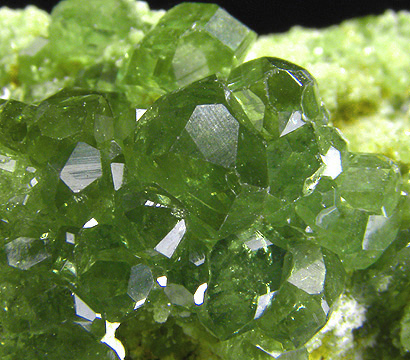