Datolite is a borosilicate mineral with the chemical formula CaBSiO4(OH). It was discovered in 1806 by Jens Esmark, a Danish-Norwegian professor of mineralogy. Datolite derives its name from the Greek word dateisthai, which means to divide. The name was given in reference to the granular nature of the crystal masses of Datolite found in their natural form - divided into many small crystals. 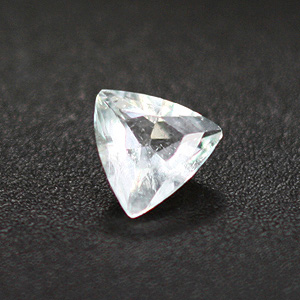 Other localities which produce crystals of Datolite are in Germany, Norway, Italy, Austria and Japan. Certain localities in Russia produce uncommon pale yellow/ green gem quality crystals of Datolite. Datolite are also found along the shores of Lake Michigan and are associated with the native copper deposits in the area. Datolite found in the areas near Lake Michigan are found in masses similar to porcelain, and the color of the Datolite crystals range from colorless to light brown.

Datolite displays monoclinic prismatic properties and in gemstone form can be brilliant despite having extremely low dispersion. Datolite are typically found as large crystalline masses in their natural form. The crystalline masses of Datolite can also be in tabular form up to 12 cm in size with extremely complex terminations. Datolite at the same time can be found in masses similar to porcelain having a column like structure. Sometimes datolite masses are cut and one surface polished, in order to create display specimens that reveal interesting and attractive patterning.

Datolite unlike most rare gemstones do not show any cleavages. However, fracturing on Datolite does exist as irregular and sometimes as extremely uneven fracturing. The fracturing can also be conchoidal making the crystals extremely brittle. The Moh’s hardness of the Datolite is between 5.0 and 5.5. Twinning of Datolite crystals has never been observed. Datolite is neither radioactive nor displaya any properties of luminescence.

Datolite can come in a variety of colors. Stones often range from being colorless, to white, yellow, green and very rarely light brown. Also, yellow and blue-ish gray zoned Datolite has been found at the Mesnard Copper mine, Houghton county, Michigan, USA.

Datolite crystals are seldom completely transparent and are sometimes translucent and mostly opaque. Datolite display vitreous luster which changes to resinous luster due to the granular nature of Datolite.