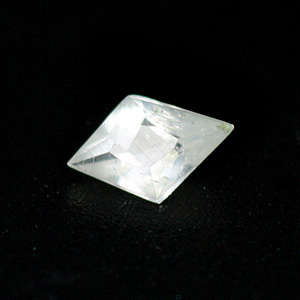 Colemanite is a borate mineral that was first discovered in 1884 by William Tell Coleman, the owner of Death Valley, California, USA. It was in Furnace Creek, Death Valley that the crystals of Colemanite were first found. Furnace Creek was formerly central to Death Valley mining and operations for the Pacific Coast Borax Company. [1]

Colemanite crystals hence derive their name from the discoverer, in his honor. Their rarity is what makes them popular with mineral collectors, and they have occasionally been faceted into gemstones.

Colemanite is what is known as a secondary mineral. This means that it was not one of the minerals deposited when the landscape originally formed, but was deposited afterwards. In arid regions where the element boron is abundant, runoff from the mountains fills intermittent lakes known as playas. In the dry season these lakes evaporate, leaving high concentrations of minerals which can form crystals under the right conditions. [4]

Colemanite displays luminescence, emitting a strong bluish white or yellow light under either shortwave or longwave ultraviolet light. Colemanite is not radioactive and is sparingly soluble in water.

Colemanite is usually found in colorless form. But due to high inclusions it can also appear to be white in color. As the inclusion increases the crystals of Colemanite begin to appear gray in color. Colemanite is also sometimes also seen in yellow / yellowish white or brown.

The inclusions commonly occurring in Colemanite typically do not allow the crystals to look transparent. Very small crystals of Colemanite are sometimes found to be transparent ,while the majority of the Colemanite crystals are translucent. The luster of Colemanite varies from vitreous to adamantine. Colemanite also displays extremely weak dispersion optical properties.

Colemanite, although rare in general, is a common occurrence in borate deposits. It generally occurs in borate deposits which have been formed in arid and alkaline environments. The surrounding areas must also have low levels of carbonate and sodium. Areas which typically have warmer weather conditions under which the borate deposits have formed tend to produce gemstone quality Colemanite crystals.

The rarity of the gemstone quality crystals of Colemanite also determines the relatively high price of good quality faceted Colemanite in the niche market of gemstones.