Clinohumite is a neosilicate mineral noted for its dazzling fiery orange color. It was named after the celebrated gem connoisseur Sir Abraham Hume (1749-1838), and also because of its monoclinic crystal structure. 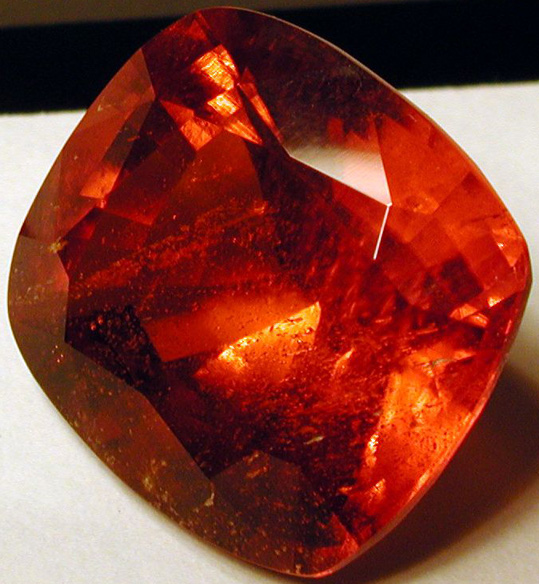 Clinohumite belongs to the Humite group of minerals and is an uncommon magnesium silicate with the chemical formula (Mg,Fe2+)9(SiO4)4(F,OH)2. The crystals of Clinohumite found in its natural form are typically extremely small and not clear, however some gem quality material has been discovered and faceted into gemstones - such as the ones in the images. The crystals of Clinohumite are characterized by fluid inclusion that typically gives the crystals a translucent to opaque appearance.

A sub-variety of clinohumite - titanoclinohumite - is formed when titanium substitutes for the magnesium in the structure - and varying amounts of these ions will cause varying optical properties. Other common impurities include iron, aluminium, manganese and calcium. [2]

Clinohumite was first discovered in 1876 in the limestone formations in Naples, Italy - in limestone that had been ejected from Mount Vesuvius. It was first described by E.S. Dana in 1892. Clinohumite crystals are often indistinguishable from the surrounding rock formation due to their extremely small size and inclusion. The first discovery of the Clinohumite crystals led to more exploration in the Mount Vesuvius area in Naples, Italy. But the largest deposit of the crystals of Clinohumite was found near Lake Baikal in the Pamir Mountains which are now in Tajikistan.

Clinohumite which are gem quality are stunning beautiful and occur in colors of white, orange, yellow and brown. Reddish orange and reddish brown colors of Clinohumite crystals do occur naturally but are quite rare. Gem quality clinohumite is said to have been found in only three locations in the world: The Pamir Mountains, the Taymyr region of northern Sibera and the Mahenge plateau of Tanzania. It is these deposits which now produce the gem quality Clinohumite crystals. Until very recently, only a few thousand carats of gem clinohumite was known to exist. [3]

The Pamir Mountains have produced many gem quality Clinohumite crystals which have been as large as 21 carats and also clear to the eye. The stunning and rare reddish orange coloring of the Clinohumite gemstones, together with their rarity, make them one of the more sought after gemstones among collectors all over the world. Clinohumite can be seen for sale online and faceted clinohumites can be seen priced at around $40-50 per carat (May 2012) for moderately included stones in the 2-10 carat size range. Stones over 10 carat are uncommon and prices per carat may thus be higher.

The largest faceted clinohumite known is said to be an 84.23 carat faceted stone from Pamir, authenticated by the GIA in 2010. During the cutting of the stone, it is estimated that around 60% of the original material was lost, necessitated due to inclusions in the original material. Due to the rarity of clinohumite, it is considered unlikely that a larger stone will be found soon. The original stone is reported to have a fascinating history - being given to a geologist by an old man who had lived in the Pamir mountains all his life, and who claimed that the stone had been in his family for 400 years. He believed it to be a 'fragment of the sun' and did not wish it to go with him to his grave so that it could continue to 'shine its light on his people'. [4]

The next largest cut clinohumite is reported to be 36.56 carats. [3] 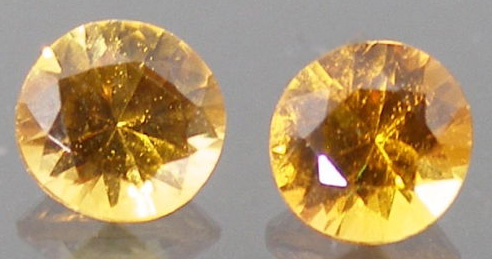