Citrine is a variety of quartz which typically has a yellow hue - although it can very from very pale to brown. The color of natural citrine is caused by trace impurities of iron (Fe3+) ions. 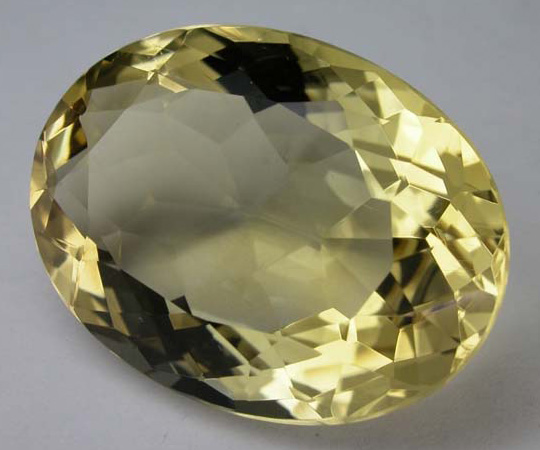 Genuine, natural citrine is quite rare - and much of what is sold as citrine today is actually amethyst or smoky quartz that has been heat treated to alter its color. [1] Typically the heat treated varieties have a more orange or reddish color than natural citrine, which is usually more pale yellow - and they can be returned to their original amethyst color by irradiation. However the difference between the natural and heat-treated stones can be difficult to detect and may require the eye of a trained expert.

It's interesting to note that the same processes in nature - geothermal heat acting on amethyst - may have been the origin of the "natural" citrine. Natural citrine is said to change color permanently if it is left in sunlight for a number of hours. [2]

Citrine has a hardness of 7 (Mohs), the same as that of quartz, and a refractive index of 1.544-1.553. It is often fashioned into faceted gemstones and cabochons.

Citrine is sometimes confused with, or even deliberately substituted for the more expensive topaz [3], which commonly occurs in similar shades of "autumnal" yellow. Citrine and topaz are two completely different gems, but citrine has also sometimes been nicknamed "bohemian topaz" [4], "gold topaz" or "Spanish topaz". [5] Such names are typically marketing tactics to increase citrine's perceived value by association with topaz.

Although uncommon, citrine's disribution is widespread, and citrine is found in many places around the world including Australia, Germany, Russia, Brazil, Madagascar, Spain, England and the USA. A large proportion of the Brazilian citrine, which is one of the world's main sources of suply, is said to be heat treated amethyst. [6]

The cause of citrine's coloration is still debated. Citrine contains the same trace elements as smoky quartz, yet is colored differently. Studies have suggested that the ratio of aluminum and lithium impurities in the crystal lattice may be the cause. [7]

Citrine can sometimes occur within the same crystal as amethyst, and such bicolored stones are known as ametrine.

Citrine has been known since old times. The first mention of it I can find in English is from John Hill's 1748 History of Fossils, which gives a full page description. Hill is evidently not aware that the citrine is a type of quartz, and states "Bright, yellow Ellipomacrostylum, the Citrina of the Jewellers... [is] never found otherwise than of this beautiful yellow; its peculiar characters make it evidently a distinct species... this remarkable Crystal is never found colourless... it is very plentiful in the West Indies, and is found in some parts of Bohemia... Our Jewellers have learnt from the French and Italians, who are very fond of it, to call it Citrine, and often cut stones for rings out of it... which after they have passed thro' two or three hands, are generally mistaken for Topazes." [8]

The stone does seem to have older origins: Citrinus (in the context of gemma or lapidum) is mentioned in Latin texts prior to that date - for example Anselmus de Boodt's 1647 "Gemmarum et Lapidum Historia" lists it [9] , however from the brief mention given to citrinus in this and other texts, it is difficult to be sure of the identity of the stone mentioned.

The word citrine has much more ancient origins; it has the same Latin root as our word "citrus" and in Latin, citrinus was an adjective simply meaning "lemon-yellow". The earliest recorded use in English was Chaucer, 1386 "His eyes were cytryne". The gemstone was named after its color. [10]

The largest cut citrine in the world (as of 2010) is the 20,200 carat (over 4 kg!) "Malaga" - an oval-cut citrine of exceptional clarity, cut and color. The Malaga was discovered in the 1980s in Minas Gerais, Brazil but was not cut until 2009. The enormous Malaga citrine measures 20 x 15 x 10 centimetres. Citrine, like amethyst, is usually found in geodes and the crystals in such cases are usually small. However, citrine occasionally forms large stones weighing many kilograms. Usually these are not of sufficient quality for gemstone use - so the Malaga is unusual. [11]

It is not too uncommon to see faceted citrines over 100 carats for sale online, and such stones may be priced at $10-50 per carat. 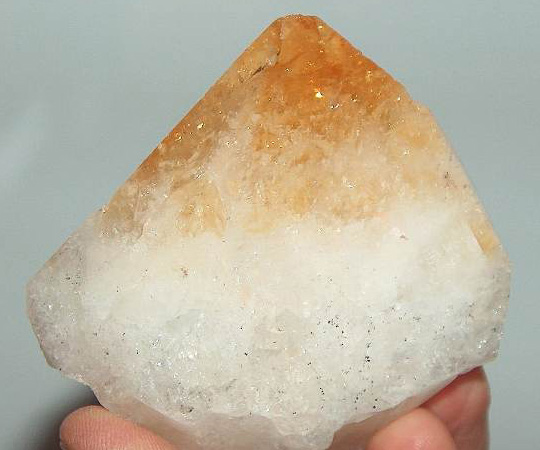