Chrysoprase is a rare green variety of chalcedony. Like other types of chalcedony, it is cryptocrystalline - meaning that it is composed of ultra-fine particles. Chrysoprase typically has the color "apple green" but various shades of green are possible. Darker varieties of chrysoprase are sometimes called prase - although this name can cause confusion as this is also a term used to describe a chlorite-included green variety of quartz. [1] 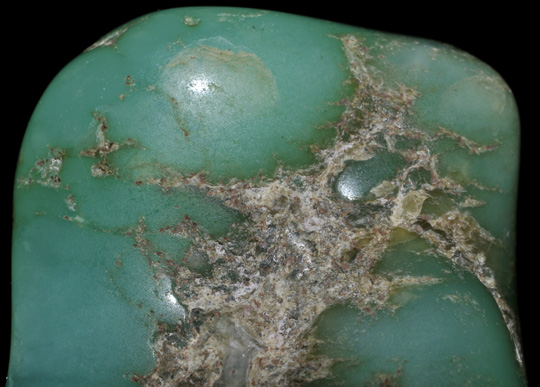 Chrysoprase has been known since old times. It was mentioned in the King James Bible's Book of Revelation as the stone used for the "tenth foundation" of the "great city, the holy Jerusalem, descending out of heaven". The King James Version was translated in 1604-1611. [2]

Chrysoprase gets its green coloring from small amounts of nickel within the stone. The name derives from the Greek words chrysos and prason meaning "golden" and "leek". [1] Chrysoprase has a hardness of 6-7 (Mohs) and is often fashioned into cabochons or tumbled stones. It has a conchoidal fracture similar to that of flint. Owing to its color it is sometimes mistaken for jade. [3] It also resembles chrome chalcedony - the difference being that chrome chalcedony's color is supplied by chromium instead of nickel. [1]

In the middle ages, Chrysoprase used to be mined in Silesia, which now forms part of the Czech republic and Poland - but it was mined until the source became exhausted. Chrysoprase was described by Martin Heinrich Klaproth in his 1801 "Analytical Essays Towards Promoting the Chemical Knowledge of Mineral Substances" and at that time Sliesia was still the main source of the gemstone.

Places chrysoprase is mined in modern times include many locations in the USA (particularly Arizona and California), Australia, Germany, Poland, Russia, Burma (Myanmar) and Brazil. Australian chrysoprase has sometimes been nicknamed "Australian Jade" although it should be noted that chrysoprase and jade are different stones. Despite being considered the most valuable of the chalcedonies, chrysoprase is nonetheless readily available and inexpensive - and an abundance of chrysoprase jewelry, carved chrysoprase objects and uncut chrysoprase can be seen for sale online for a few dollars.

The best quality chrysoprase is that with the finest green color, translucent and without flaws or variations in color. [4] As with many other stones, prices for the highest grades can be many times those of the lower grade material. Higher quality chrysoprase has acquired the nickname "imperial chrysoprase" in some circles - and this title, perhaps something of a misnomer, was likely inspired by jade, of which the highest quality is called "imperial jade". In the case of jade, the imperial variety's rich, deep green color was caused by chromium ions, which are absent in paler, lower grades of jade. In ancient times, the use of imperial jade was reserved for the courts of royalty, hence the designation "imperial". However, chrysoprase's coloration is supplied by trace amounts of nickel - and the term "imperial chrysoprase" is a modern invention, first appearing in literature in around 1970 in advertising for Australian chrysoprase. [5]

In folklore, chrysoprase is said to give protection when travelling by sea. It was also said to be the favorite gemstone of Alexander III of Macedon (aka. Alexander the Great). [7] Another curious tale is that thieves used to keep a chrysoprase stone in their mouth, in the belief that it would help them remain unseen. [8] 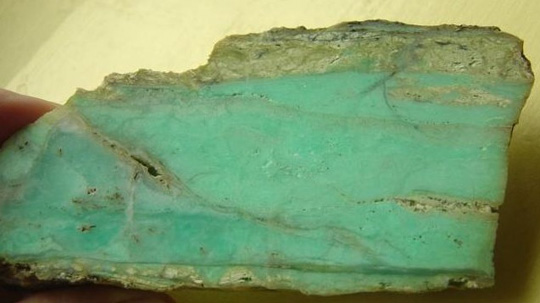