Charoite is a unique mineral and a recent arrival in the world of gemstones. It has been found in only one place in the world: The remote Yakutia, in Siberia, Russia - a remote region famous for its spectacularly cold climate.

Charoite was introduced to the world's gemstone markets in the late 1970s and "officially" described in 1978 in mineralogical literature. It's said that charoite may have been discovered as early as 1947 in the Murun mountains of Yakutia but the remoteness of the region meant that it was unknown to the outside world for a number of years. [1] 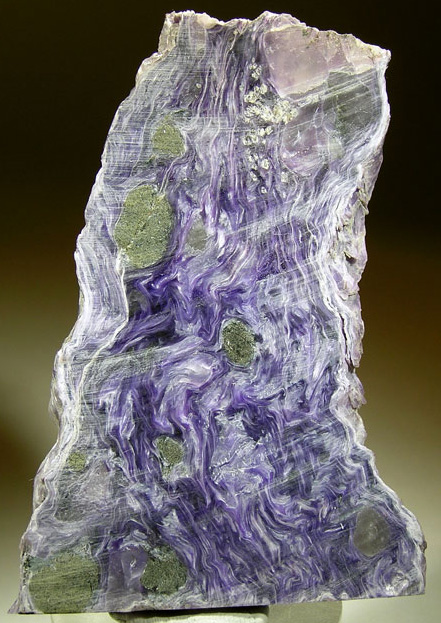 Charoite is actually made up of more than one mineral - and in this respect is has something in common with another popular decorative stone: Lapis lazuli. The stone we know as "charoite" is mostly charoite mineral, with small and varying amounts of transparent microcline, orange tinaksite and black aegerine-augite. [2] [3] [4] Charoite the mineral has the splendidly complex chemical formula K5Ca8(Si6O15)2(Si2O7)Si4O9(OH)•3(H2O) [5] - although it is said that the chemistry of charoite is highly complex and not yet completely understood. In particular, the reason for its purple color has not been ascertained and one source states that it also contains sodium, barium, strontium and fluorine ions. [3]

There is some discrepancy as to the origin of charoite's name. A number of online sources state that is is because it was named after the Charo (aka. Chara, Chary) river, which flows through the region. However, webmineral.com , one of the more reputable resources for mineral information, states that the root of the name is the word "chary" which in Russian means "magic" or "charms" - and that the river is 70km from the stone's source. [5]

With its pearly luster and swirling patterns of lavender, purple and lilac, charoite has quickly become a popular gemstone with jewelers. When found in the rough it typically appears dull and uninteresting - it is only when charoite is cut and polished that its splendour is revealed. [1] Charoite is typically cut en cabochon, made into beads, or carved into various object shapes. It is slightly soft so it should be handled carefully and may not be best suited to ring settings or other situations where it might be exposed to impacts. It's said that charoite is heat sensitive and that it should not be steam or ultrasonic cleaned. [3]

The best charoite has striking, bright, rich purple color and elegant patterning - without too much of the black coloration. Sometimes this stone's color is so rich that people think specimens have been 'enhanced' when they have not! Charoite is one of the more inexpensive stones - and often cabochons in the 20-100 carat range are priced retail (February 2011) at less than $1 per carat. The best colored cabochons will likely cost more, prices ranging between $1 and $4 per carat. Some charoite is chatoyant - and this will increase its price.

Large pieces of charoite are typically correspondingly less expensive - for example one cut slab I viewed, with fantastic purple coloring and patterning, weighing 29.8 pounds (over 67,000 carats!) was priced at $2050 including shipping - that's around 33 carats to the dollar. It's said that charoite rough may be difficult to obtain as there may be restrictions to exporting it from Russia. 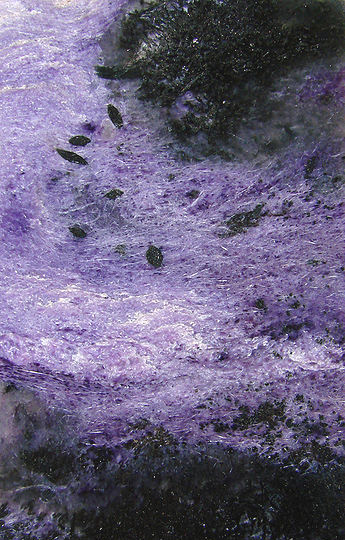 Close up of Charoite slice