Chalcedony is the "catch-all" name given to a wide group of semi-precious quartz stones. Chalcedony consists mostly of a fibrous variety of cryptocrystalline quartz, together with between 5% and 20% moganite, which is a monoclinic polymorph (i.e. structural variety) of quartz. [1] Cryptocrystalline means that the individual crystals are too small to be seen with the naked eye. 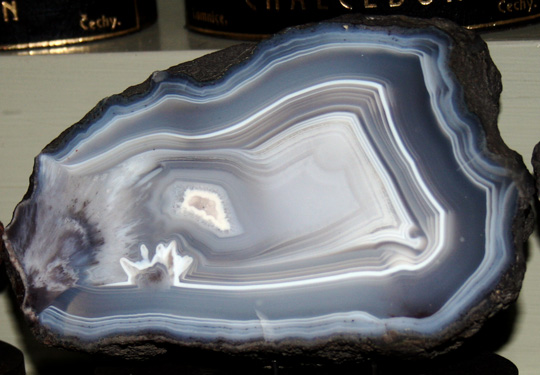 The various colors of the many colored forms of chalcedony (listed below) are caused by the presence of other minerals. Varieties of chalcedony include agate, aventurine, bloodstone, carnelian, chert, chrysoprase, heliotrope, jasper, mtorolite, plasma (a green variety), St. Stephen's stone (white with minute red spots), onyx, petrified wood, prase, sard and sardonyx. [2]

Chalcedony is found all over the world - and at least one variety is found in each of the United States of America. The market for chalcedony is large and shaped objects of innumerable kinds are made from chalcedony. To give some idea of the scale of this market; the U.S. production of gem chalcedony was $1.9 million in 1993.[2]

Chalcedony is a stone with a long and rich history. It was known to the ancient Babylonians.[3] (assuming of course that we have been able to translate accurately the identity of stones from such ancient texts; not an easy task).

Owing to their wide range of appealing colors, ability to be carved and their durability, the various types of chalcedony have been popular with stone-carvers since ancient times - and chalcedony objects such as seal-stones (a carved stone used to make a decorative impression in a soft material such as wax) have been found dating to 1800 BC. Chalcedony was also used by the amcients to make knife blades (such as the one in the picture), rings, plates, goblets, intaglios, beads and other decorative objects. [1] In ancient times, chalcedony was more highly prized and costly (relative to other stones) than it is today.

Chalcedony is mentioned in the Bible as one of the twelve precious stones garnishing the wall of the city in the book of Revelation. Seen by some as symbolizing the twelve tribes, the significance of these gems was interpreted differently by Rabanus Maurus (786-856 AD.) - who interpreted them as twelve virtues. Chalcedony was seen as the "flame of inner charity". [4]

In old times chalcedony, like many other precious stones, was believed to have some special magical power: For example, a fragment of an old Greek Lapidary (Pitra's Specilegium Solesmense), estimated to have been originally written in around 200-300 AD., lists several types of magical amulet for seafarers - and describes an amulet set with a carbuncle (red garnet) and a chalcedony, that was supposed to confer protection against drowning to sailors. [4]

In many cultures in ancient times, precious stones were believed to have healing qualities - and in addition to being worn or carried as bringers of fortune or vitality, they were sometimes even prescribed as medicine; powdered and added to the strange concoctions of those times! While nowadays such "medicines" are rapidly dismissed as the creations of superstition (and over-zealous marketing by traders), one wonders whether there may even have been some cases in which sicknesses caused by mineral deficiencies may have been alleviated by the consumption of minerals. We take mineral supplements in our era; and it is generally accepted that, used correctly, they are important for health. Could the ancients' experiments with consuming potions made with precious stones have been a form of mineral supplementation, or even a remnant of some ancient science that has been lost in the mists of time? This is a subject that may not have been investigated in great depth... but experimentation is not at all recommended: Many minerals are toxic. Consumption of chalcedony, it being made of quartz, might lead to silicosis, a potentially serious condition. 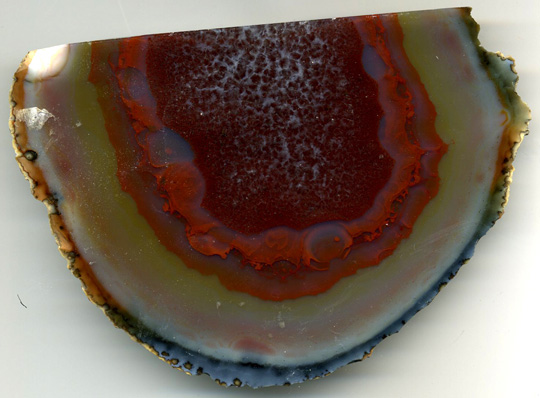