Celestite, also known as Celestine is a clear, or sometimes pale bluish white crystal; "sky blue", hence the name - which derives from the word "celestial". It occurs in many places around the world; sometimes in geodes - and the largest Celestite geode is in Ohio USA, called "Crystal Cave". Crystal Cave measures 35 feet across at its widest point. It is the largest discovered geode in the world and contains celestite crystals up to 18 inches across. Celestite also occurs in fibrous and compact massive forms. [1] 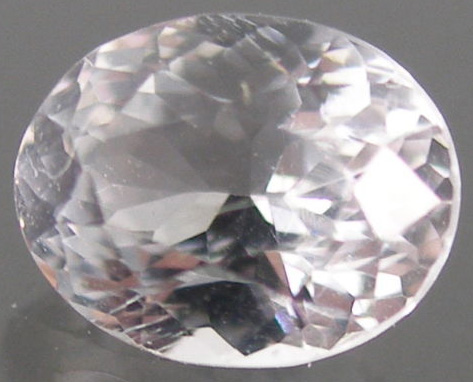 Celestite has the chemical formula SrSO4 (Strontium Sulphate). Apart from the characteristic bluish tinge, which can sometimes be quite faint, celestite is very similar in look and structure to barite BaSO4 (Barium Sulphate) - and the two have often been confused. The two can be told apart by a "flame test". Sprinking a small about of the dust of the crystals into a flame, barite crystals will turn the flame pale green whereas celestite will turn the flame red. [2]

Celestite is found in sedimentary rocks around the world, with notable examples coming from Madagascar, Belgium, Michigan USA, Mexico and Poland. Its hardness is only 3-3.5 on the Mohs scale, meaning that there are other minerals generally more suited to cutting into gemstones. Celestite crystallizes in the orthorhombic crystal system and is often found as tabular crystals. Celestite displays some fluorescence and has a refractive index of 1.619-1.635. It is popular with mineral collectors and is more often found in mineral collections than in jewelry, but has been known to be faceted into cut stones. [3]

Folklore and "new-age" teachings hold that this stone brings magical assistance in communication, whether written or oral. It's said to assist with intuition, "speaking your truth" and dream recall.

Celestite was first discovered in 1791 in Pennsylvania, USA and is now the official state mineral of Pennsylvania. [4] It is described in Thomas Egleston's 1871 Catalogue of Minerals, With Their Formulae and Crystalline Systems He states that at the time, celestite found commercial use in the manufacture of fireworks - being responsible for the red coloration. [5] Strontium compounds are still used for this purpose. [6]

Celestite is isomorphous (has the same mineral structure) with barite and anglesite (Lead Sulphate - PbSO4). [5]

According to [1] , the International Mineralogical Association Commission on New Minerals and Mineral Names has approved the name celestine for this mineral - despite the fact that celestite has less ambiguity; celestine has other connotations such as the book called "The Celestine Prophecy."

The cause of celestite's blue coloration has for a long time been a mystery. As recently as 1979, American Mineralogist acknowledged that celestite's color was still unexplained - and listed the numerous hypotheses that had been put forward. These ideas included vivianite inclusions, colloidal gold inclusions, and phosphate substitutions for sulphate. Although some of these theories have had the lid closed on them (such as colloidal gold inclusions, as analysis showed that gold was not present), and despite much complex scientific study, the 1979 paper did not reach firm conclusions. [7]

An orange celestite is also mentioned in the American Mineralogist article referenced above. The cause of coloration in this case, however, has been concluded to be due to copper impurities. Also, a green celestite is mentioned - and the cause of the green coloration in this case is known to be the presence of sulphur inclusions. These are yellow, and combined with the existing blue tint of celestite, create an overall green. [7]

Celestite is sometimes found in association with sulphur, gypsum, calcite, strontianite and fluorite. [8] 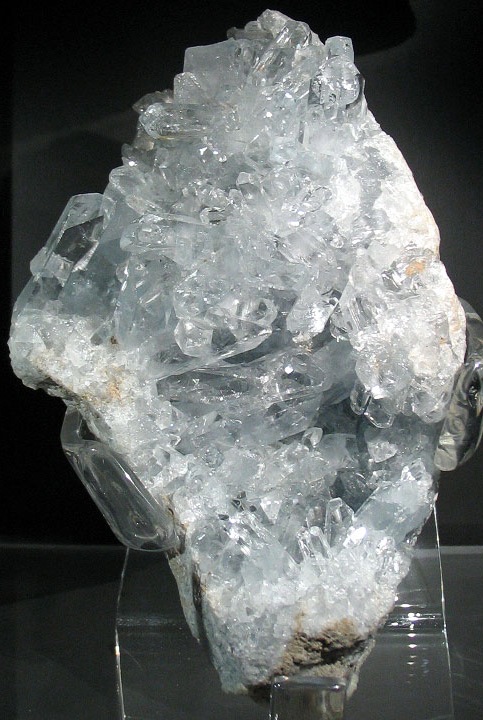 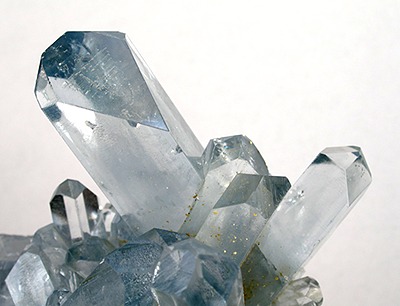