Carnelian is a red-brown variety of chalcedony (chalcedony is a cryptocrystalline form of quartz). It is very similar to sard, and the two names are used interchangeably - although sard is sometimes considered to be darker in color, closer to brown. Carnelian derives its color from iron oxide impurities in the crystalline structure. [1] Carnelian was once also spelled cornelian. 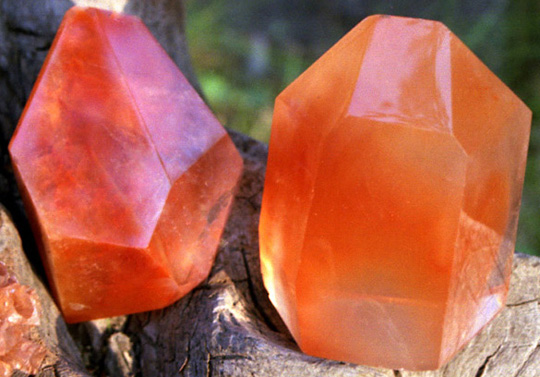 Carnelian can occur in a wide range of shades of red, from pale through to very dark, almost black. It has a hardness of 6-7 (Mohs) and nowadays is often seen as a tumbled stone. It may also be seen fashioned into the shape of a faceted crystal, as in the second image.

In folklore, carnelian is seen as being beneficial to the blood, and is also (no doubt through the association of its color) said to be good for creativity, sexuality, courage and determination. Carnelian has also been accredited with mystical qualities; it is nicknamed the "actor's stone" and is said to be able to aid recall - including that of past lives. [2]

Real carnelian is mined in Brazil, India and Uruguay. It is said that much of the carnelian on the market today is in fact agate which has been dyed and heat treated. This can be discerned by holding it up to the light - colored agate will show stripes whereas carnelian has a more cloudy, even distribution of color. [3]

Like many other varieties of chalcedony, carnelian has been in use since ancient times. It was found in Mehrgarh (Neolithic site in Pakistan) and these finds were dated to the 4th-5th millennium BC. It was also used decoratively in Minoan Crete, and these finds were dated to 1800 BC. It was used by the Egyptians to make carved scarabs, beads and other carved objects; and used widely in Roman times to make seal-stones.[1] Carnelian was also mentioned in both Old and New Testaments of the Bible, including being described as a precious stone in the Book of Ezekiel. [1] Ezekiel lived in the 6th century BC.

In the 17th century, pale colored carnelian was known as "female carnelian" and the darker stone was known as "male carnelian". This is described in John Woodward's 1695 "An Essay Toward a Natural History of the Earth and Terrestrial Bodies, Especially Minerals, etc." [4]

Sir George Watt's fascinating "A Dictionary of the Economic Products of India", dated 1889, has an interesting account of Carnelian with several details not found elsewhere. Carnelian was produced in Japan, India and Burma in those days - and much of the carnelian produced at that time in India was heat treated! It was baked in the sun in specially created trenches for a month or two in order to enhance and bring out its red color. Also, a rare white variety of carnelian was mentioned by Watt, who says that these were prized. [5]

Carnelian is also said to have been known to the Mesopotamian royalty of the city of Ur. There is also an interesting legend surrounding Napoleon I and carnelian: Napoleon was said to have personally discovered an octagonal carnelian seal on a battlefield during his Egyptian campaign. It bore the inscription "The Slave Abraham Relying On The Merciful God." The seal passed down to Napoleon III, who wore it on his watch chain and believed it to be a talisman conferring some form of magical protection. [6] The image from Kunz's original text is reproduced below. 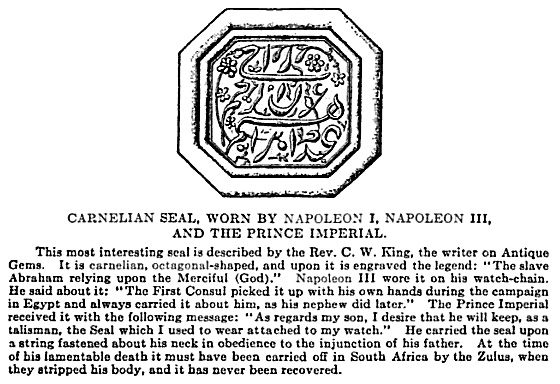 The notion that carnelian has some form special power as a talisman is indeed quite ancient. George Frederick Kunz, in his 1913 classic The Curious Lore of Precious Stones cites the fascinating and rare Lapidario del Rey D. Alfonso X "The Lapidary (i.e. Book of stones) of King Alfonso X), noting that this text recommends the wearing of carnelians "...to those who have a weak voice or are timid in speech, for the warm colored stone will give them the courage they lack, so that they will speak both boldly and well". Now the Lapidario ("book of stones") is a work of which the origins are truly lost in the mists of time. Alfonso X was the King of Castile, Leon and Galicia and lived from 1221 to 1284. In the Lapidary's introductory text, written in the 13th century, it is described as having been translated into Castilian (early Spanish) "from the books of ancient philosophers" and transcribed between 1276 and 1279. [7]

Kunz goes on to mention that it was said that the Prophet Mohammed himself word a silver ring with an engraved carnelian set in it. [6] 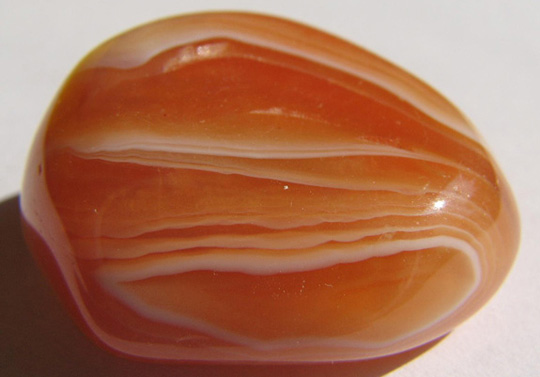