Brucite is Magnesium hydroxide - Mg(OH)2 in mineral form. It was first discovered in 1824 and named after Archibald Bruce (1777-1818), an American mineralogist and professor at the Columbia University. 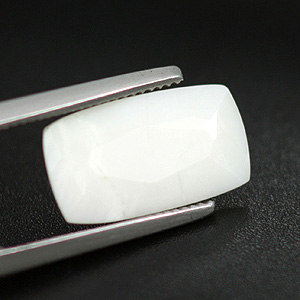 Brucite is not typically seen as a mineral specimen or considered to be a 'gem mineral' however as can be seen in the image, has been faceted by at least one adventurous gem cutter! Brucite has a number of industrial uses for which it is better known, including as a source of the element magnesium, as an agricultural fertilizer additive, as a furnace additive in the steel industry and as a flame retardant filler in the plastics industry. [1] It is used as a flame retardant because its thermal decomposition releases water. [2]

Brucite is composed of 41 percent of magnesium, 3 percent of hydrogen and 54 percent of oxygen and the the molecular weight of Brucite is 58 grams.

Significant crystals of Brucite rarely occur hence Brucite is usually found as a granular mass usually tabular in form 15 cm to 19 cm in size. Brucite does not display twinning properties. The crystals of Brucite are extremely brittle with the Brucite mass or crystals displaying multiple fracturing. The fracturing on Brucite is sectile and the separable plates are often flexible. The fractures also occur along the fibers on the Brucite mass and the fibers are elastic.

Brucite in massive form is not very hard - the Moh’s hardness of Brucite is between 2.5 and 3.0. Brucite mass is also not very dense with a density of just 2 g/cm3. Brucite mass does not display luminescence properties and neither is radioactive. But Brucite does display pyroelectric properties (generates a temporary electric charge when heated or cooled).

Brucite can be transparent when white in color but this formation is extremely rare. Hence the Brucite masses found are usually translucent. Brucite mass has a vitreous to waxy luster which turns into a pearly shine on the edges.

Brucite is found as a common alteration product of periclase in marble, in dolomitic or chlorite schists. Brucite is also never found in masses of crystals though it occurs in many localities. Brucite is often found in thin sheets 'sandwiched' in layers in cholrite and montmorillonite / smectite minerals. [4]

The most stunning, largest crystals of Brucite are reported to be those found in Namibia - which are beautifully pale green in color, extremely clear and bright.