Bixbite is an extremely rare variety of beryl only found a few locations in the Southwestern USA. In 2006 the Jewelers Association gave it the title of rarest gem stone on earth [1] - an honor previously held by benitoite, another stone only found in one location in California. Bixbite is now officially called "red beryl" so as to avoid confusion with bixbyite. You may also find bixbite called "red emerald". 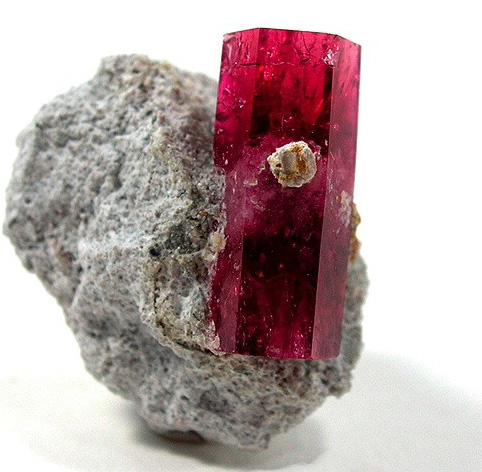 Bixbite gets its rich deep pink / red color from manganese (Mn3+) ions substituting for aluminium within the crystalline structure of the beryl. Pure beryl has the chemical formula Be3Al2(SiO3)6 - beryllium aluminium cyclosilicate. [2]

Like other beryls, bixbite is hard (7.5-8 on the Mohs scale) and so lends itself to gem cutting - however it is very rare to find gem quality bixbite / red beryl larger than 1 carat in size and may typically be 0.15 carat. The largest faceted clear bixbite in existence is under 3 carats, with the largest faceted bixbite (not of clear quality) is 8 carats. [3]

Bixbite / red beryl was first discovered in 1904 in the Violet Topaz Mine, Utah, by Maynard Bixby (1853-1935). It was confirmed as beryl by geochemist W. F. Hillebrand in 1905. However the stones were not of gem quality and little material was found at the original mine. It was not until 1958 that gem quality bixbite was found - in the marvelously named Wah-Wah Mountains of Utah. [4]

It seems only to have been in the last ten years or so that bixbite / red beryl has been a serious "contender" in the gemstone market. Promoted as one of the rarest stones in the world by Gemstone Mining Inc., prices can go as high as an astonishing $10,000 per carat for the best quality stones, which are clear and have the desirable "stop-light red" color. [3] [4] It's said that red beryl is worth 1,000 times as much as gold and the CEO of Gemstone Mining Inc. stated that bixbites are truly "fit for royalty" as only one bixbite gem is found for every 150,000 diamonds. [5] (of course, it could also be argued that there are far fewer people looking for bixbite than there are people looking for diamonds, which have been marketed with incredible success as "necessary" to every marriage proposal and seem to have a pricing law of their own. )

Now, (depending on which source you consult) bixbite is mined in: The Wah Wah Mountains, Beaver County, Utah; on Mt. Antero, Chaffee County, Colorado; in the Sawtooth Mountains area, Idaho [6] [7]; in the Thomas Range of mountains in the western deserts of Utah (also renowned for its "Topaz Mountain", a favorite with mineral collectors); at Paramount Canyon and Round Mountain of the Taylor Creek Tin District, in the Black Range of Sierra County, New Mexico. [3].

It was thought that a new source of bixbite had been discovered, in Madagascar - but after analysis the stones found were declared to be pezzottaite, itself a rare stone but although similar in appearance to bixbite, not exactly the same mineral. This can be confusing as the pezzotaite stones are sometimes listed as "new red beryl". [7] Pezzotaite has now also been found in Afghanistan - and so the buyer is urged to request gemological certification when buying red beryl, in a similar manner to the diamond trade. [7]

Gemologists have several means available to them to identify the difference between the two - such as the matrix, or rocky mass, that the crystal is attached to. If the stone has been faceted however, the gemologist can test refractive index, which varies in the two minerals. This is the amount that a ray of light entering the stone is bent, and varies for different transparent substances.

Bixbite is now manufactured synthetically and flawless lab-grown bixbites can be obtained for a fraction of the price of gems cut from naturally occuring red beryls. Also, owing to the rarity of bixbite, counterfeit stones with surface inclusions have been found which had been treated with dye and glass to enhance their appearance. [7] 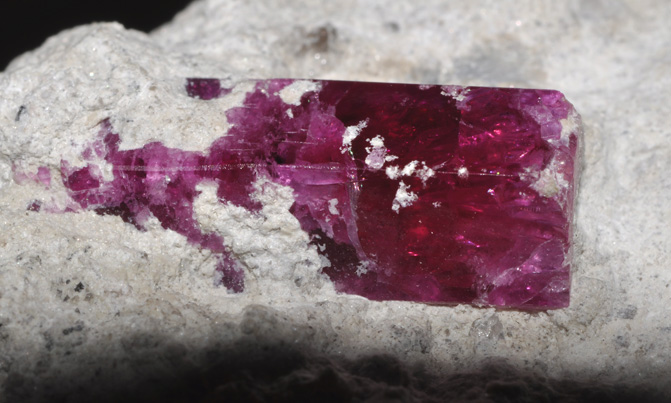