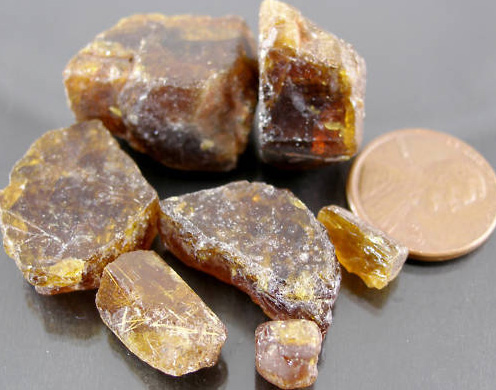 Bastnaesite's chief distinction is that it is one of the most significant sources of the element cerium and other rare elements. The other chief resource for these elements is the mineral monazite.

Bastnaesite is weakly radioactive due to the presence of large proportions of rare earth element Cerium.

Bastnaesite is not typically considered a gemstone / faceted, however better quality examples of the crystals may sometimes be seen as collectors' minerals in their natural form. The chief use of bastnaesite is industrial, and the rare earth elements it contains are extracted through a multi-stage process and used in numerous ways in a wide variety of modern technologies: For example, europium, found in small amounts in bastnaesite and monazite, found much use in the 20th century in the red phosphor used in color televisions. [1]

Bastnaesite is usually found in rare earth element deposits in igneous rocks. The biggest naturally occurring crystals of Bastnaesite were found in Burundi and in Pakistan. Bastnaesite has been found in association with zinc [2], allanite, cerite, tysonite [3], barite, calcite, dolomite, fluocerite, and albite, monazite and magnetite. [1]