Azurite, also known as Chessylite, Mountain Blue, Armenian Stone or Azurro Della Magna, is a deep blue mineral associated with copper deposits. It was found at Chessy-les-Mines in France, which is the origin of the name Chessylite. Azurite has however been known and loved since ancient times. It has the chemical formula Cu3(CO3)2(OH)2 [1] 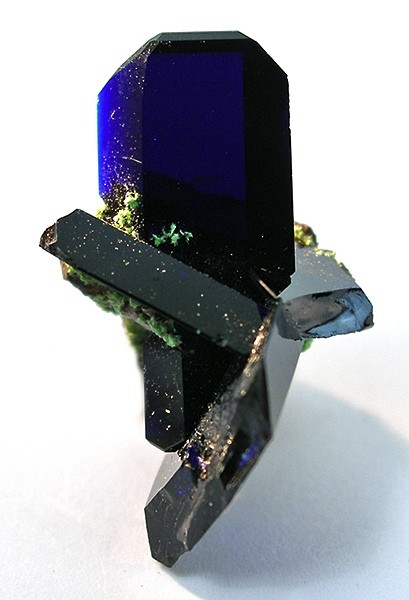 Azurite was known to the ancient Egyptians and was used as a blue pigment from the time of the Fourth Dynasty (2613-2494 B.C.) It was also used decoratively in the Chinese Ming and Sung dynasties, and was used in the middle ages to make the pigment called Prussian Blue. [2] It was was called Kuanos by the Greeks, which is the root of the modern word cyan, and was called Caeruleum by the Romans. [1]

Azurite was one of two minerals used in the middle ages to make blue paints in Europe, the other being lapis lazuli. Azurite pigment has also been known by the names Blue Bice and Blue Verditer, [1] and was also used to make eyeshadow. [2]

Azurite pigment was sometimes confused with lapis lazuli, the source of ultramarine; but can be distinguished by the fact that azurite turns black when heated, whereas ultramarine / lapis lazuli retains its color. [1]

Azurite is a soft mineral, with a hardness of 3.5 to 4 on the Mohs scale. It is also somewhat chemically unstable, and prone to gradual loss of the intensity of its deep blue color in heat, bright light or open air. For this reason it is not so often fashioned into gemstones. It is more likely to be found in the hands of mineral collectors, who are advised to keep the stone in a cool, dark, sealed environment in order best to preserve its color. [1]

Azurite can be found in many places in the world, including Australia, France, Morocco, Africa, and Southwesetern USA, and is commonly found in association with the other naturally occuring copper carbonate mineral: malachite [1], and the two may sometimes be found mixed or banded together in the form of Azure-malachite. Azurite also commonly occurs together with chrysocolla, dioptase or turquoise [3] - which also contain copper.

The largest azurite crystals to have been found, originate in Tsumeb, Namibia - where many varieties of azurite have been found - including translucent gem azurite of an exceptionally dark blue / almost black color. An example of this can be seen in the lowest image. [4] [5]

In a rare type of azurite called bluebird, azurite occurs mixed with dark red cuprite (CuO2). Bluebird azurite was named after the Bluebird Mine in Gila County, Arizona, from which it has been produced. As can be seen from the image below, in which the azurite crystals have naturally formed in a 'rosette' shape, bluebird azurite can be attractive and desirable - and it is highly sought after by collectors and jewellers. [6] 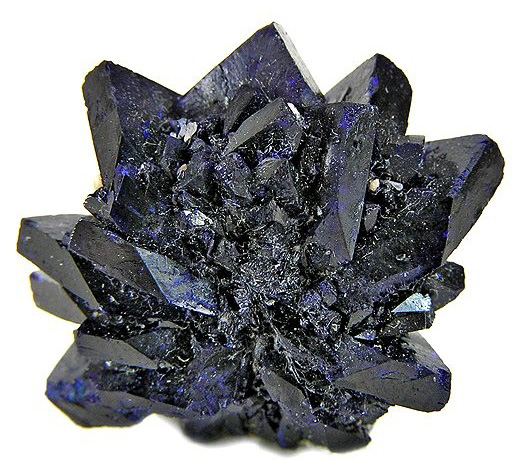 Bluebird Azurite
From the Bluebird Mine, Arizona USA. 3.1cm across.
Photo by Rob Lavinsky, iRocks.com - lic. under CC-BY-SA-3.0 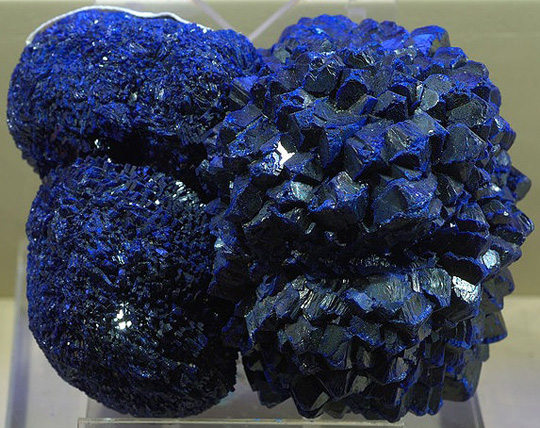 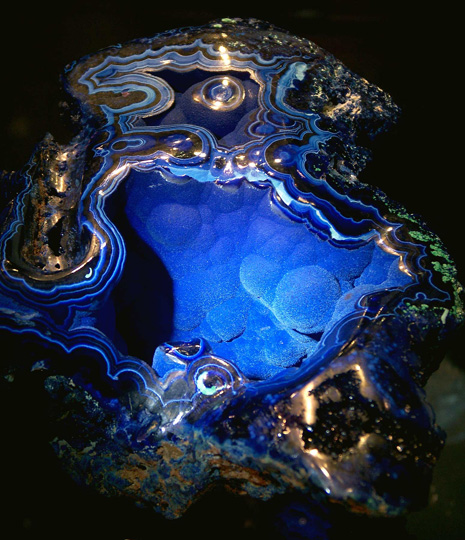 Layer of tiny sparkling Azurite crystals on the inside of a geode.
Photo by cobalt - released under Creative Commons 2.0 License