Not to be confused with andesite, andesine is a type of feldspar in the plagioclase series. It is a silicate, with the chemical formula (Ca,Na)(Al,Si)4O8. Andesine was first described in 1841 and is so named because it was found abundantly in andesite lava flows in the Andes mountains of Columbia. [1] Andesine contains by definition 30-50% calcium and 50-70% sodium in the crystal structure's sodium-calcium position. [2] 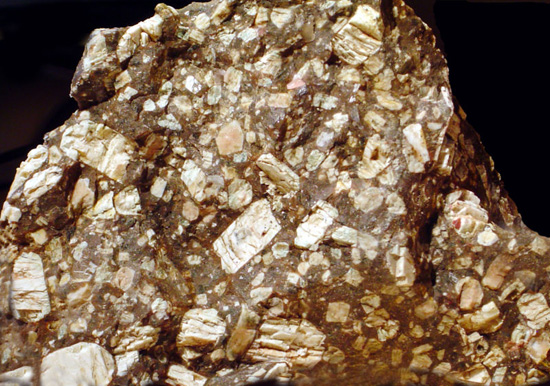 Red andesine has recently been the subject of a very great controversy in the gem world, with much concern over forgery, resulting finally in lawsuits. In 2002 the American market began to be flooded with supplies of what was claimed to be "red andesine", sometimes also called red labradorite [5], surrounded by a strong marketing drive to invest heavily in the gem.

Concerns over the identity of the stones were circulating widely by 2006 [5], and by 2008, gem industry insiders were raising red flags, citing inconsistencies such as the high volume of cut stones suddenly available, with little variation in color and a complete lack of rough (uncut) stone or mineral samples available for examination or purchase. Other inconsistencies included a smokescreen around the location of the mines. Samples of rough stone eventually surfaced, but it was found that these had been treated, and this was confirmed by highly involved testing at gemological laboratories.[6]

Finally, a presentation by Robert James of the International School Of Gemology at the world-famous Tucson Gem Show in Arizona, USA in 2010, claimed to "close the book" on this story with demonstration that the Tibetan, Chinese and Mongolian "red andesine" that had flooded the market, were forgeries made from treated feldspar. [7]

However.... in a story with more twists in the tail than a serpent, geologist Richard Hughes has visited the difficult-to-access Tibetan mine sources in 2010 and confirmed that the red andesine found there, at 13,000 feet above sea level, is genuine.

That doesn't account for the stones from other sources, though. It's been said by gem industry insiders that the fascinating and complex Andesine scam has been "one of the largest frauds in the history of the gem stone industry". [8] The great difficulties encountered by Gemologists in verifying these stones, give a good example of the challenges posed by the fraud that abounds in the international gem trade - and of the challenge to consumers in being sure of what they are buying: It took the world's top experts, with sophisticated laboratory equipment, to close the lid on the Andsine scam.

As always, there are no substitutes for expertise, certificates of authenticity, a trusted source - and to remember the old saying "if it sounds too good to be true, it probably is."