Amethyst is a famous variety of quartz, with the same overall chemical formula of SiO2 (silicon dioxide). [1] It is violet / purple in color but if exposed to heat, it will turn yellow and some of the citrine that is sold was actually made from heat-treated amethyst. 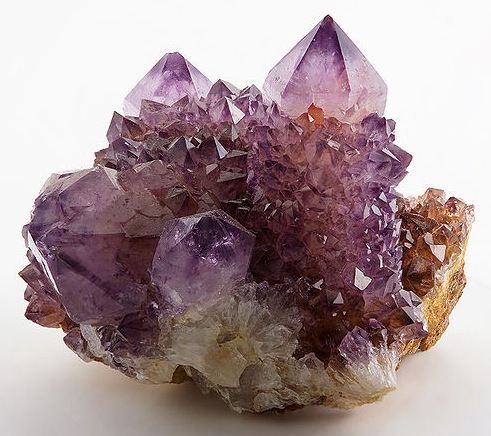 Amethyst is often sold "unfaceted", very often as a "bed" of crystals such as the example in the picture - that once formed part of a geode (see also Agate for more on geodes). Amethyst is relatively hard, with a hardness of around 7 on the Mohs scale - and so is also often fashioned into beads, faceted gems or carved objects.

Amethyst varies in shape, size and color in the various locations in which it is discovered, and experts can even tell where amethyst came from, sometimes even down to which mine! The best amethyst is of a grade called "Deep Siberian" - said to be that with the best deep color, with larger and undamaged pieces of course fetching higher prices. [1]

Siberian Amethyst was written up in Louis Charles Henri Macquart's 1789 “Essai ou recueil de mémoires sur plusieurs points de minéralogie” - a full essay, which stated that in general Siberian Amethyst was very dark in color, but that stones of "a very precious purple" had been found.

Amethyst has been in use as a gemstone since at least ancient Egyptian times. It was used to make intaglios (engraved gems and cameos) in Roman times. Medieval soldiers wore it as an amulet for protection in battle. [1]

A rich body of mythology surrounds amethyst. The word originally derived from the Greek "Amethustos" which meant 'not drunken' - and it was believed that amethyst had the special power of preventing intoxication. For this reason, in Graeco-Roman times, goblets were fashioned from amethyst. It was also sometimes powdered and added to wine - although this is not recommended nowadays as it could lead to silicosis, a potentially serious condition. [2] [3] 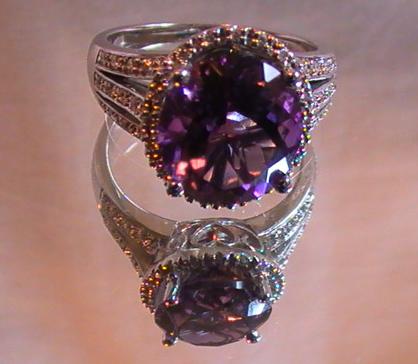 At first glance, in modern times, one might think that the best method of preventing drunkenness would be simply not drinking! But in the ancient Mediterranean, wine was part of the way of life - and it's possible that the ancient idea of the inclusion of amethyst was not strictly to prevent the wine from having any effect, but to impede its darker or base effects such as stupor, indolence or alcoholism, while still allowing the "higher" qualities of bacchanalian intoxication (inspiration, delight, upliftment) to shine through and be enhanced.

Several versions of Graeco-Roman myths exist which include Bacchus / Dionysus, ancient God of Wine, and amethyst. In one tale, Dionysus loved a beautiful maiden, Amethystos and was pursuing her. She wished to remain chaste and was protected by Artemis, who transformed her into a white stone. Dionysus, making an offering of humility, poured wine over the crystals, turning them purple. [1] So it can be seen that the connection between amethyst and wine comes from the "doctrine of signatures", the ancient system of correspondences, and the two are linked because of their similarity in color.

In another version of the story, Dionysus is enraged and swears to kill the next mortal who crosses his path. Alas (of course) the next mortal turns out to be our lovely maiden Amethystos; she is spared by Artemis who turns her into a beautiful statue of quartz. Dionysus, humbled, sheds tears of wine in remorse for his rage and these turn the quartz into amethyst. [1]

Within these ancient tales there is much symbolism and wisdom - and the underlying subtext of this story is that blind rage or insane action will lead to the risk of destruction of that which we hold dear: Beauty and love. It is also suggested that the beauty of amethyst may serve as an antidote to, or protection from, anger - and this is reflected in the work of modern crystal healers who will use the gem as an aid to spiritual transformation.

Although the ancients may have thought that the color of amethyst came from the tears or the wine of a God, modern science has reached different conclusions. The ancients were right in that amethyst was a type of quartz; but in the 19th century it was thought that the color in amethyst came from manganese impurities. Work in the late 20th century has revealed that the color comes from small quantities of complex iron and aluminium impurities (10 to 100 ppm range) within the stone. [3]

Amethyst occurs naturally in many places in the world. Centuries ago it was highly scarce and was considered to be of the same order of value as cardinal gemstones such as ruby, Sapphire and emerald; however very large deposits of amethyst have been found since the 18th century, bringing the price down enormously. Amethyst is now produced in Brazil, Zambia, South Korea, India, Uruguay, Russia, Austria, Canada and in many states of the USA. [1]

Heat treatment can permanently enrich and darken the color of amethyst. For this reason, most of the amethyst that is sold in the marketplace today is heat-treated, and it's said that one should assume that this is the case, unless it is specifically stated otherwise. [5] There are of course many places where amethyst can be mined, and the enterprising collector has the option of mining their own as certain mines will allow crystal hunters to do this, possibly only within certain safely guidelines or laws.

Amethyst has been designated as the birthstone of the astrological sign of Pisces / as the stone of the month of February.