Amber is the common name given to ancient, fossilized resin exuded from trees, that has gradually hardened over time. The oldest amber is over 300 million years old - though much of it is around 130 million years old. 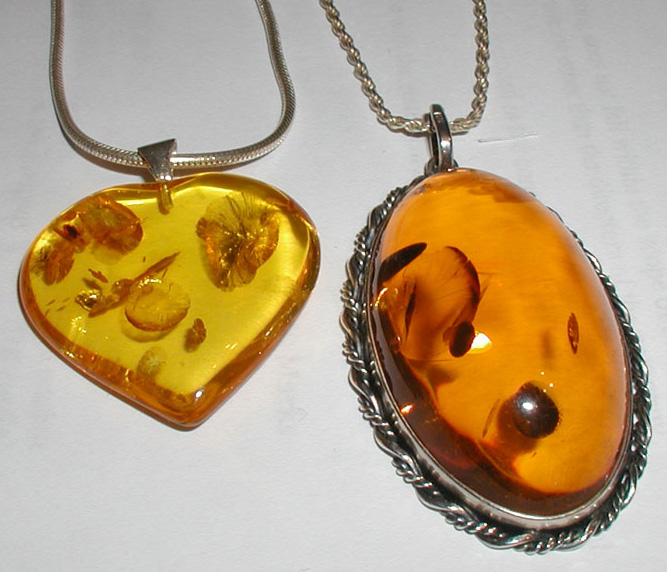 Typically "amber-colored" (a shade somewhere between orange, yellow and pale brown), it can also be red, green, pale yellow, or even occasionally blue (caused by sunlight). Blue amber is rare - and an example of blue amber from the Dominican Republic is in the second image. As with other gems, clarity is prized; more transparent examples of amber are in general considered more valuable.

One curiosity of amber is that it is occasionally found with insects inside it. Although sometimes many millions of years old, the insects are amazingly well preserved as if in a time capsule. As a result of this fascinating phenomenon over 1,000 species of insect that are now extinct can be examined. Amber has greatly increased scientific knowledge about these ancient creatures - and "insect amber" is also highly prized by some collectors.

For a long time, the origin of Amber was not known and the ancients had many theories, some of them wildly fanciful, about the origin of amber. It was confused with ambergris (literally "grey amber") as both items were found washed up on beaches. Pliny however, having observed amber with insects inside it, correctly noted that amber must at one time have been liquid. [1]

Amber has been used as adornment for millennia and was known as elektron to the Greeks. It has had spiritual significance in many ancient cultures. It was also used as incense in ancient times as it could be burned; it will soften when heated.

Two pieces of amber can be fused by heating them, coating the surfaces to be joined with linseed oil, and pressing them together while still hot. Scraps of amber that were once discarded are now used to make "pressed amber". In this process, the amber is heated (without air, so that it does not combust), and then compressed and formed into shapes using hydraulic pressure. [1]

Amber is distributed around the world. Once, most of the world's amber came from the Konigsberg area of Prussia; now the main source is on the Baltic coast of Russia. [1]

The most fascinating and sensational creation ever made using amber was undoubtedly the Amber Room, also known as the Amber Chamber. Situated in the Catherine Palace of Tsarskoye Selo near Saint Petersburg, the Amber Room was a large room with furniture, walls and decorations composed of amber. Walls were decorated with amber panels backed with gold leaf and mirrors. Chandeliers and statues were carved from amber. It has been called the "eighth wonder of the world" and was said to be absolutely astonishing in its opulent beauty. Nor was it the only room of opulence in the palace - there was another room of lapis lazuli with a floor of ebony inlaid with flowers of mother-of-pearl! [2] Created by German and Russian craftsmen in the early 18th century, the Amber Room was looted during the Second World War and was tragically lost - under mysterious circumstances. Numerous conflicting theories exist as to the room's ultimate fate, and although it is often thought to have been destroyed, many believe that it may have survived, packed into crates and hidden at a secret location. Treasure hunters still search for it - together with the fabled lost Nazi gold.

Amber has had mystical qualities ascribed to it since time immemorial. It has even been used medicinally, applied as a remedy for fevers, inflammations and to boost the immune system, and "oil of amber" was once supplied by pharmacists. [1] 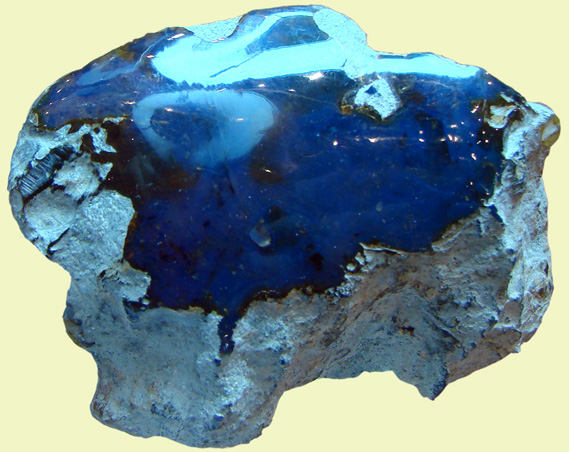 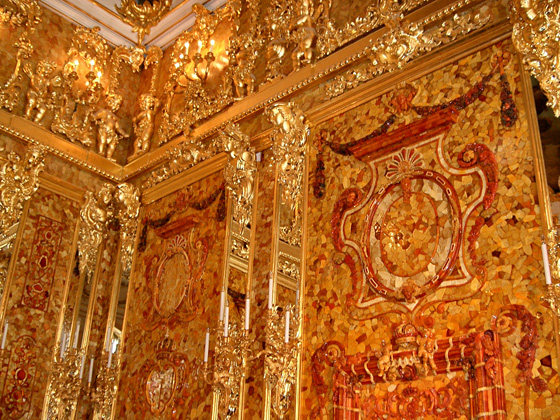 Detail of the sensational Amber Room
- presumably a photo of the reconstruction (public domain photo, dated 2004)