Amazonite is a type of microcline feldspar. It is somewhat uncommon and only found in a limited number of locations. These include Colorado USA, China, Russia, Madagascar, India, Kenya, Zimbabwe, Namibia and Brazil. It is named after the Amazon River but it is considered unlikely that Amazonite occurs in the Amazon region. [1] 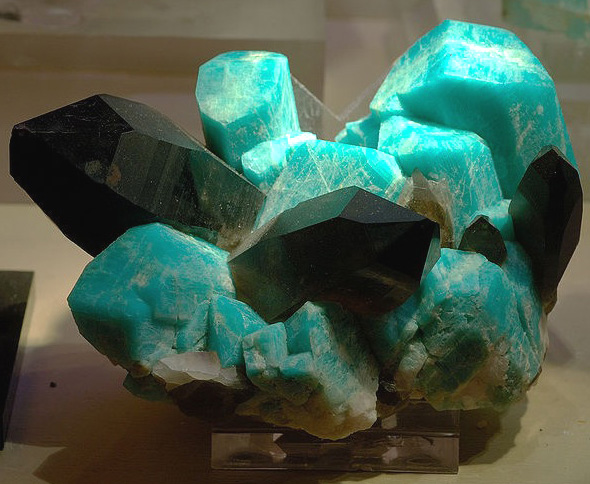 Amazonite together with Smoky Quartz (the Amazonite is the
blue-green mineral).
Photo by Eric Hunt - released under Creative Commons 2.5 License

Amazonite looks somewhat similar to some varieties of jade, and it's possible that historically there may have been some confusion between the two. Amazonite does have a long history of use for decorative purposes, and objects carved from amazonite have been found that date from the time of ancient Egypt [2] - though whether it was at the time considered a separate mineral from jade is likely unknown.

Amazonite has a beautiful green color when polished, varying from yellow-green through to blue-green, occasionally with fine white streaks. For many years its coloration was thought to have been caused by copper - however recent studies suggest that the coloration may be caused by small amounts of lead and water in the mineral's composition. [1] It is often found together with other minerals including quartz, muscovite and other feldspars.

Amazonite is only rarely transparent, typically being completely opaque like the example in the image. However for the reason of its attractive coloring it is fashioned into gemstones, although it breaks relatively easily and has a hardness of "only" 6-6.5 on the Mohs scale. [2] For this reason, it is most often fashioned into cabochons (domed on top and flat underneath), spheres, beads, cameos and tumbled stones, rather than faceted.

Amazonite displays the quality known as schiller - a visual effect caused by light reflecting off the different planes that exist within the mineral's crystalline structure. [4]

The chemical formula of amazonite is KAlSi3O8 - potassium aluminium silicate. [3] The origin of Amazonite's color was not known in the past. It was thought that the stone derived its color from copper occurring in the mineral; however, it is now thought that the color is the result of lead impurities and water. [1]

Folklore says that the stone brings hope, confidence and increased self-worth to the wearer or carrier. [5]