Almandine is the most common type of garnet and the most widely used garnet in the gem trade. It has the chemical formula Fe+32Al2(SiO4)3. 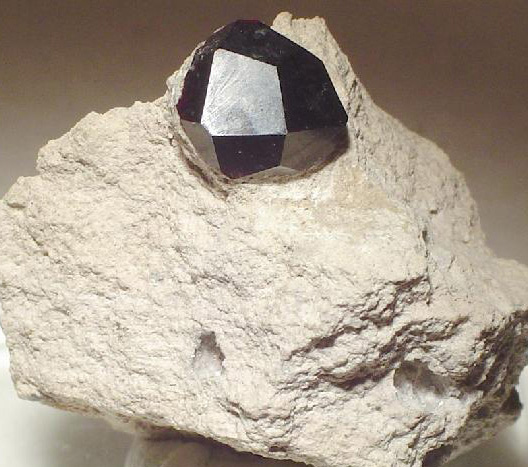 Sometimes (incorrectly) known as almandite or alamandine, almandine has a deep red/purple color, sometimes so deep as to appear black. It often forms somewhat rounded crystals, and has a hardness of 7-7.5 on the Mohs scale.

Almandine is found in many places in the world, including Tirol (Austria), the Ural Mountains (Russia), Ishikawa (Japan), Norway, Asia Minor, Sri Lanka, Brazil, Alaska, Germany, Australia, and Connecticut, Michigan, Massachusetts and Colorado in the USA. [1]

Almandines are found in abundance in Sri Lanka and for this reason have been called Ceylon Rubies. They were once thought to be actual rubies, and those discovered in Australia acquired the name Australian Rubies for a while. [2]

Almandine typically grows in "rounded" crystals, and these can take several forms - including the rhombic dodecahedron (12-sided), the trapezohedron (24-sided), and occasionally the hexoctahedron (48-sided) - or as forms which are complex combinations of these shapes. Almandines often occur in large numbers, usually either as massive or as crystals that are physically isolated from other almandines and embedded in other metamorphic rocks. [3]

Note that almandine, which is a type of garnet, should not be confused with almandine spinel, which is a completely different gemstone. [4]

Almandines are often cut en cabochon, i.e. with a domed upper surface. [2] The best almandine for gemstones is considered, unsurprisingly, to be that with high transparency and attractive color. Much of the almandine that is found is not of gem quality, and some of the lower-grade almandine found is of sufficiently low value to find itself crushed and used in the manufacture of garnet paper, an abrasive product. [4]

Another curious property of almandine is that it becomes magnetic when heated. [4]

Almandine has been well known since old times - for example being mentioned as a type of Garnet in the Society of Gentlemen's 1763 "A New and Complete Dictionary of Arts and Sciences". However, Abel Boyer's 1702 "Royal French-English Dictionary" describes Almandine as a type of ruby. Digging back still further into the ancient vaults, we find Antoine Furetière's 1690 "Dictionnaire universel" (Universal Dictionary) - which states that the original name for this stone may have been Albandine:

Almandine. f.s. Gemstone. It is a kind of ruby, much softer & lighter than the ruby of the East, and which tends more toward the color of garnet, than to that of the true ruby. It is regarded as on one of the most precious stones, although inferior to the real ruby. It is also called Albandine. This word comes from Albandi City of Caria, from where Pliny stated that it had been brought.

(Note - Caria was a region in Asia Minor.)

This text adds an interesting angle to the history of almandine - as it is often considered nowadays that the stone was so named in reference to a similarity in color with the almond. However, if Furetière is to be believed, it would appear that this is not the case - despite the fact that the word garnet may have derived from the Latin name for pomegranate - "granatum" - because of a similarity between garnets and pomegranate seeds. [6]

The almandine garnet has been named the state mineral of Connecticut, USA.

Almandine garnets have also been known to display asterism with either four or six-rayed stars, or even both. [7] 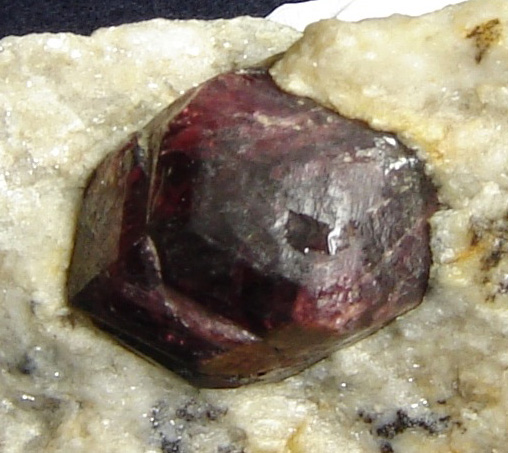