Alexandrite is a variety of Chrysoberyl, a mineral with the chemical formula of BeAl2O4. Alexandrite is one of the most expensive gemstones in the world, and a top quality 1 carat gem of the best color can fetch up to an astonishing $100,000. 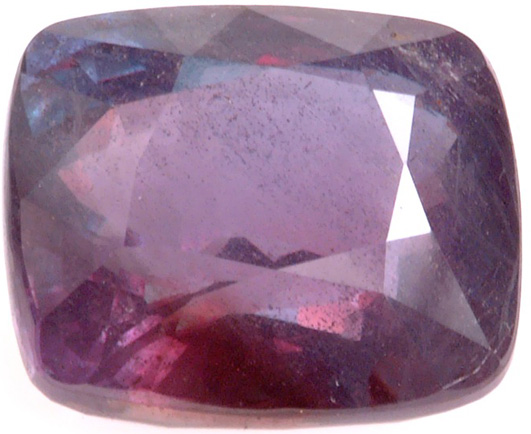 Alexandrite was named after Tsar Alexander II of Russia, and legend has it that the stone was discovered on April 17th 1834 - the 16th birthday of Alexander, who would become the future Tsar. This story is however controversial. [1]

This gemstone is famed for its fascinating color-changing properties under different forms of light. Alexandrite that comes from the Ural Mountains in Russia shows itself green in daylight and red under incandescent light or candlelight. [1] Other varieties of alexandrite may be yellowish or pink in daylight and shades of red under incandescent light; but only chryoberyls that display a genuine change of color may be called alexandrite. [2]

Alexandrite is very hard (8.5 on the Mohs scale) and tough, meaning that it is highly suited to being worn in jewelry. The best quality alexandrites are said to come from the Ural Mountains of Russia, where the largest cut stones may be up to 30 carats. However, alexandrite is now mined in several other locations around the world, including Sri Lanka (where stones of up to 65 carats have been found), India, Tanzania, Madagascar, numerous locations in Brazil, Myanmar (aka Burma), Sri Lanka, Colorado USA, and Zimbabwe.

Any Alexandrite over 5 carats is very rare [1], and the stones with the most pronounced color change effect are considered to be the most valuable. [2]

Many gemstones are still believed by numerous people to have magical qualities - and alexandrite too has magical associations: It's said that wearing alexandrite will enable its wearer to sense imminent danger. [3] Perhaps this idea was inspired by the "color change to red", with red symbolizing danger. It's also considered that the stone inspires imagination, intuition, and creativity which would make it a great stone to have around your house as room accents if it was more affordable.

It's interesting to note that synthetic alexandrite has been developed - in 1973. The synthetic alexandrite still possesses the color-changing qualities; however it's said that the stones will have inclusions, depending on the method that was used to grow them - and these can be identified by an expert. [3] As is typically the case with high-priced gemstones, there have been a variety of methods employed in attempts to imitate alexandrite: Synthetic corundums, with added trace elements (such as vanadium) to mimic the color change effect [4], or even color-change spinels have been known to have been sold as alexandrite on the gemstone market.