Alabaster (also at times in history having been spelt alabastre, alabast, alablaster), is a name applied to not one but to either of two minerals. The alabaster of the ancients was generally calcite, and that of today is a hard variety of gypsum, a form of calcium sulphate [1] in massive (i.e. non-crystalline) form. 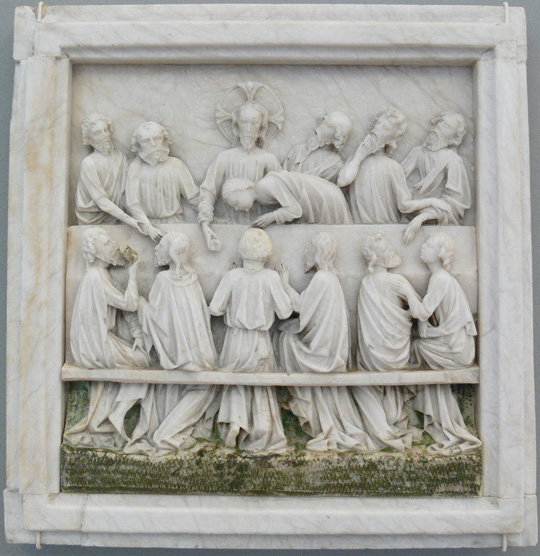 Both types of alabaster are often white, and when polished can take on a smooth, creamy appearance. This has given rise to descriptive phrases such as "alabaster skin" - a complimentary, poetic phrase used to describe a fine, pale complexion. The purest alabaster is snow-white; however, some may contain iron oxide (which can cause brown veins or clouds to be seen in the stone) [1] or other mineral impurities which give rise to various colorations.

There is a natural black form of gypsum alabaster, which occurs in only three places in the world - Oklahoma (USA), China and Italy. [1] One of the well-known uses for this material is in creating the "black pieces" for a chess set (of which the "white pieces" would be made from white alabaster).

There are many other alabaster colors. One may see "peach alabaster" - a somewhat translucent material which has been found in Southern Utah, USA [2]. Peach alabaster was also used by the ancient Egyptians. Whether the modern and ancient peach alabaster are the same mineral, and which of the two minerals peach alabaster is composed of, is not said - neither is the cause of the coloration.

Other varieties of alabaster are often given exotic names that describe their color or patterning - such as Oystershell Alabaster, Maximilian Green, Red Raspberry, Black Opaque and Translucent Orange. [3] Alabaster rough in all these varieties can typically be obtained online, typically priced at a few dollars per pound. Compared to many other varieties of precious stone, alabaster is inexpensive - and is considered one of the 'least precious'.

In modern times, alabaster is often dyed various colors, such as red or blue - and such stone is sometimes easily recognizable from its uniform, strong coloration. Such objects may also turn out to have been made from soapstone, not alabaster. [4]

Alabaster is a stone that has a glorious past, having been used as one of the materials of choice for fine art carving since ancient times. It has had a very long history of use as a decorative stone - and innumerable examples of alabaster work exist from many cultures and eras. Alabaster is soft enough to be easily carved - yet owing to solubility in water, is not well suited to outdoor work.

Alabaster was used as a decorative stone by the ancient Egyptians - particularly for carving sarcophagi, vases, jars, perfume bottles and sepulchral objects - and Egypt abounds with alabaster objects either for sale or in the Egyptian Antiquities Museum. [4] An 'alabaster box of precious ointment' was also mentioned in the New Testament of the Bible.

The use of the word alabaster is certainly ancient. OED states that it was named after a town in Egypt - however the Wikipedia entry for alabaster [1] suggests that the town was named after the stone - in the manner of the mining towns of the19th century Old Western USA. Alabaster is mentioned in John Barbour's 1375 poem "The Bruce"; "Schir archibald... Of alabast bath fair and fyne, Ordayne a towme full richly" - "Sir Archibald ordained a magnificent tomb of fine and fair alabaster". [5] "The Bruce" was written in Scots, an old Lowland Scotland language / dialect that has many words in common with old English. [6]