Agate is a variety of chalcedony characterized by multi-colored banding. Agate is typically cut in cross-section so that the patterns made by the bands can be revealed. [1] 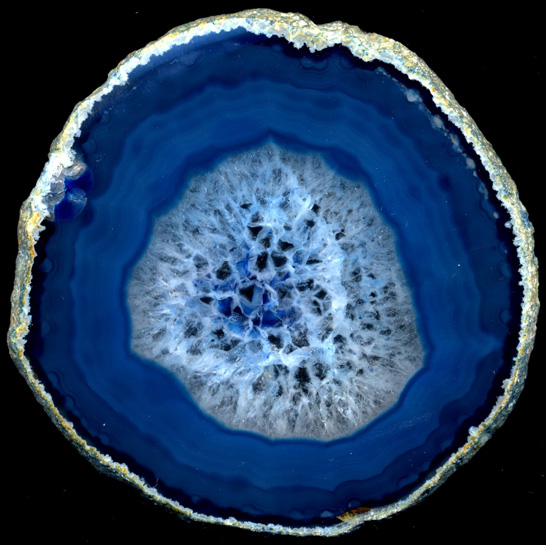 Agates form in hollow cavities inside volcanic rocks that were created by gas bubbles that remained trapped as the molten lava cooled. Crystalline layers were then deposited from the inside by waters containing silica and other minerals in solution. Variations in the conditions or in the solution are thought to have led to the result that the transverse section of an agate often looks like the growth "rings" in the cross section of a tree trunk. Many agates are hollow because there was not enough mineral deposition to fill them entirely, and it is quite common for the innermost surface layer to consist of a "cave" of quartz or amethyst - and geodes of this kind are commonly seen for sale; typically either sectioned, cut into slices, or quartered to make bookends. [1]

Agates are extremely resistant to weathering and so are often found in soil or in gravel beds, where the surrounding rock has weathered away.

Agate had widespread use in the ancient world, and archaeology has uncovered numerous specimens indicating its presence in the Bronze Age (c. 3000-1000 BC). It was known both to the Egyptians and the Sumerians. Agate was said to have been named by Theophrastus (c. 371 – c. 287 BC), the famous Greek philosopher, who discovered the stone by the river Achates. [1]

In ancient times agate was highly prized - and has been collected enthusiastically throughout history. It was believed to be a talisman with magical powers varying from being able to quench thirst, confer invisibility and divert storms. King Mithridates of Pontus was said to have a collection of two to four thousand agate bowls - and one must wonder whether he was simply an avid collector, or whether he sought special powers! Agate was also popular during the Renaissance. [2]

There are very many named "varieties" of agate, and these may often be named after the location where they were found, or after the stone's visual characteristics. A few of the named types include Banded Agate, Blue Lace Agate, Botswana Agate, Carnelian Agate, Fire Agate, Green Agate, Mexican Lace Agate, Moss Agate, Oregon Snakeskin Agate, Rainbow Agate and Wood Agate. Agate is a very common mineral found in numerous locations around the world, and new "types" are being discovered every year. [3]

Agate is often cut into thin, translucent slices to show its patterns and colors, and is often used in jewelry making or carved to make objects from bookends to marbles. It has a hardness of around 7 or more on the Mohs scale, and typically has colors from white to grey, orange to red, light blue or black. Some of the agate seen for sale is dyed in order to enrich its color.

Agate is the birthstone of the astrological sign of Gemini. 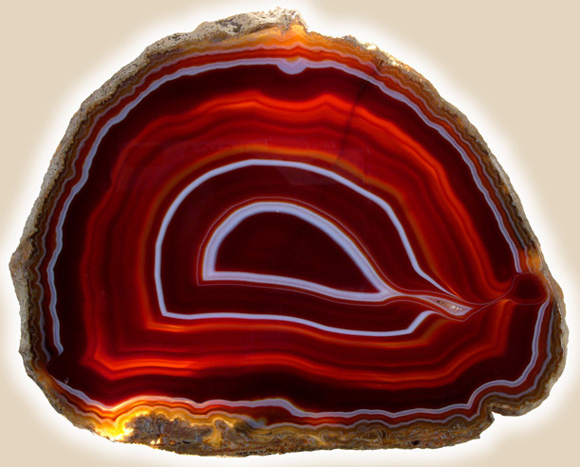 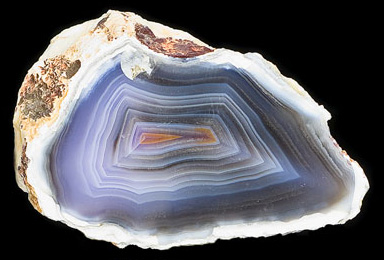