Afghanite is a rare, complex alumino-silicate mineral with the chemical formula (Na,Ca,K)8[Al4Si6O24](SO4,Cl2,CO3)3 · 0.5H2O . Afghanite is a somewhat recent arrival in the world of gemstones; having first been described in 1968 from a find in a location famed for another blue mineral, Lapis Lazuli - in the Sar-e-Sang (aka. Sary-Sang) mine in the Badakhshan Province of Afghanistan. [1] 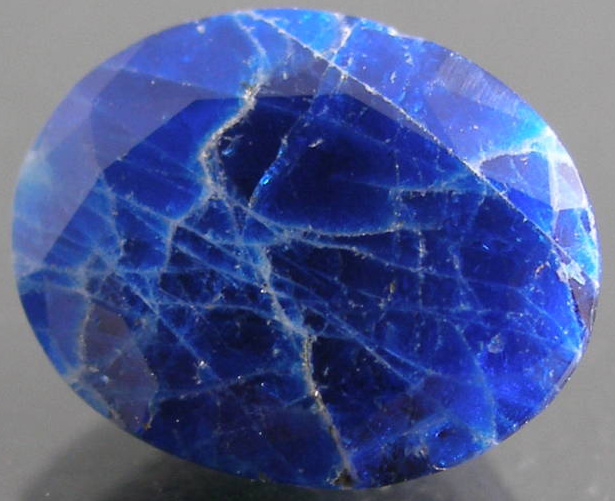 Not only have both minerals been found in the same mine (even within the same rock [1] ), but they also have strong similarities in their chemical composition - and the Lazurite responsible for the blue coloration of Lapis Lazuli has the similar chemical formula (Na,Ca)8(AlSiO4)6(SO4,S,Cl)2

Although named from the discovery in Afghanistan in 1968, Afghanite was actually discovered over 100 years earlier in the Mount Vesuvius region of Italy. At the time of this first discovery it was described by Italian mineralogist Arcangelo Scacchi and subsequently named "Natrodavyne" in 1910. Scacci's samples, buried in the collection of the Mineralogical Museum of the University of Rome, were rediscovered and confirmed to be Afghanite in 1994. [2]

The best crystals of afghanite yet found have come from Sar-e-Sang [3], although the mineral has also been discovered in other locations - including Tuscany, Latium and Campania (Italy), Germany, the Pamir Mountains (Tajikistan), Baffin Island (Canada), near Lake Baikal (Siberia), New York, Russia (1975) and Newfoundland. [1] [4] Afghanite is only rarely found in crystalline form at these other locations - and most of the world's discrete Afghanite crystals have come from Sar-e-Sang. [3]

Afghanite is typically blue but can also on occasion be found in an almost colorless, transparent form. It has a hardness of 5.5 to 6 (Mohs) and is occasionally seen set into jewelry such as pendants, necklaces, and earrings - although as it is slightly soft, great care must be taken not to subject the stone to damage. It is not recommended for types of jewelry that may be subject to greater wear, such as bracelets or rings. [5]

Afghanite is a rare mineral, and is not often found as a gemstone and in jewelry settings owing to the fact that mineral collectors purchase the majority of the gem quality Afghanite than might be suitable. It's said that there may be more Afghanite located in remote parts of Afghanistan but that these regions are difficult to access. [5]

Under short wave UV light, afghanite fluoresces brightly with shades of orange-yellow. Afghanite crystals are often rounded and to find them in the natural state with sharply defined edges and crystal faces is uncommon. The crystals are small - seldom more than 2-3cm in length. [6] Afghanite exhibits perfect cleavage in one direction and is a feldspathoid mineral of the cancrinite group. [7] Other examples of feldspathoid minerals are leucite, nepheline, analcime, cancrinite, hauyne, lazurite and sodalite. [8] 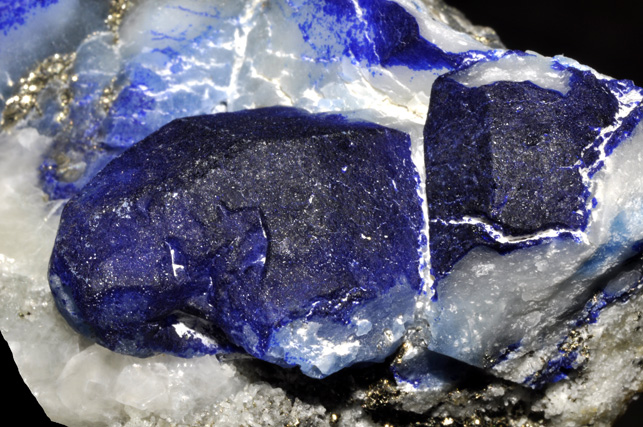 Afghanite with pyrite on calcite
(unfaceted)